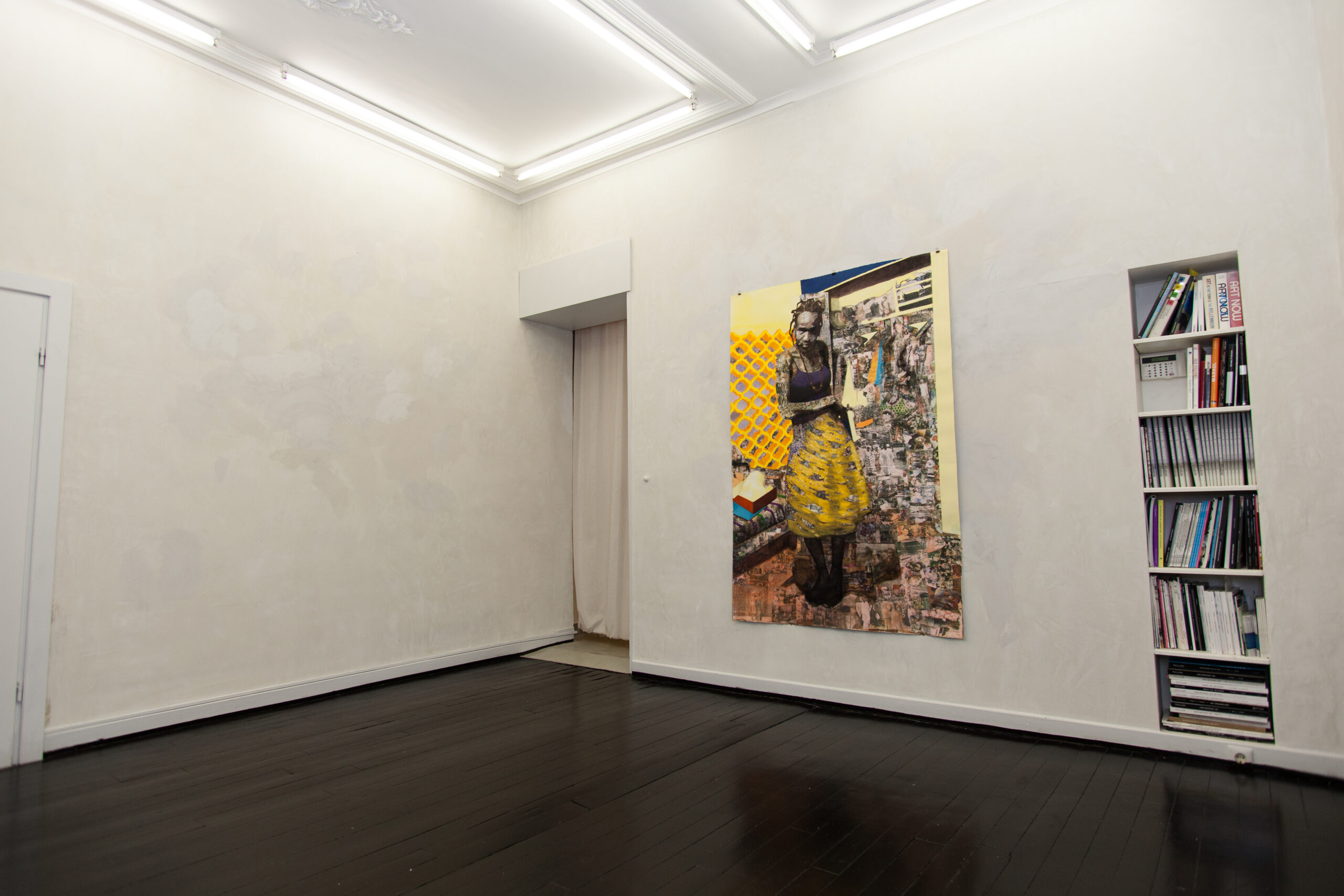 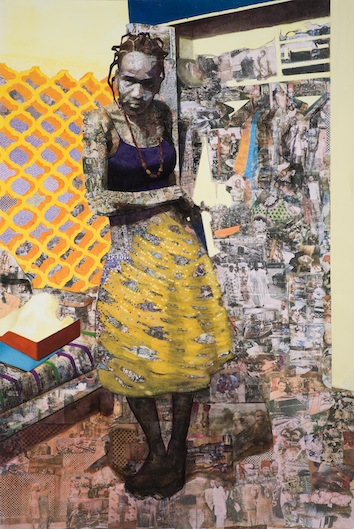 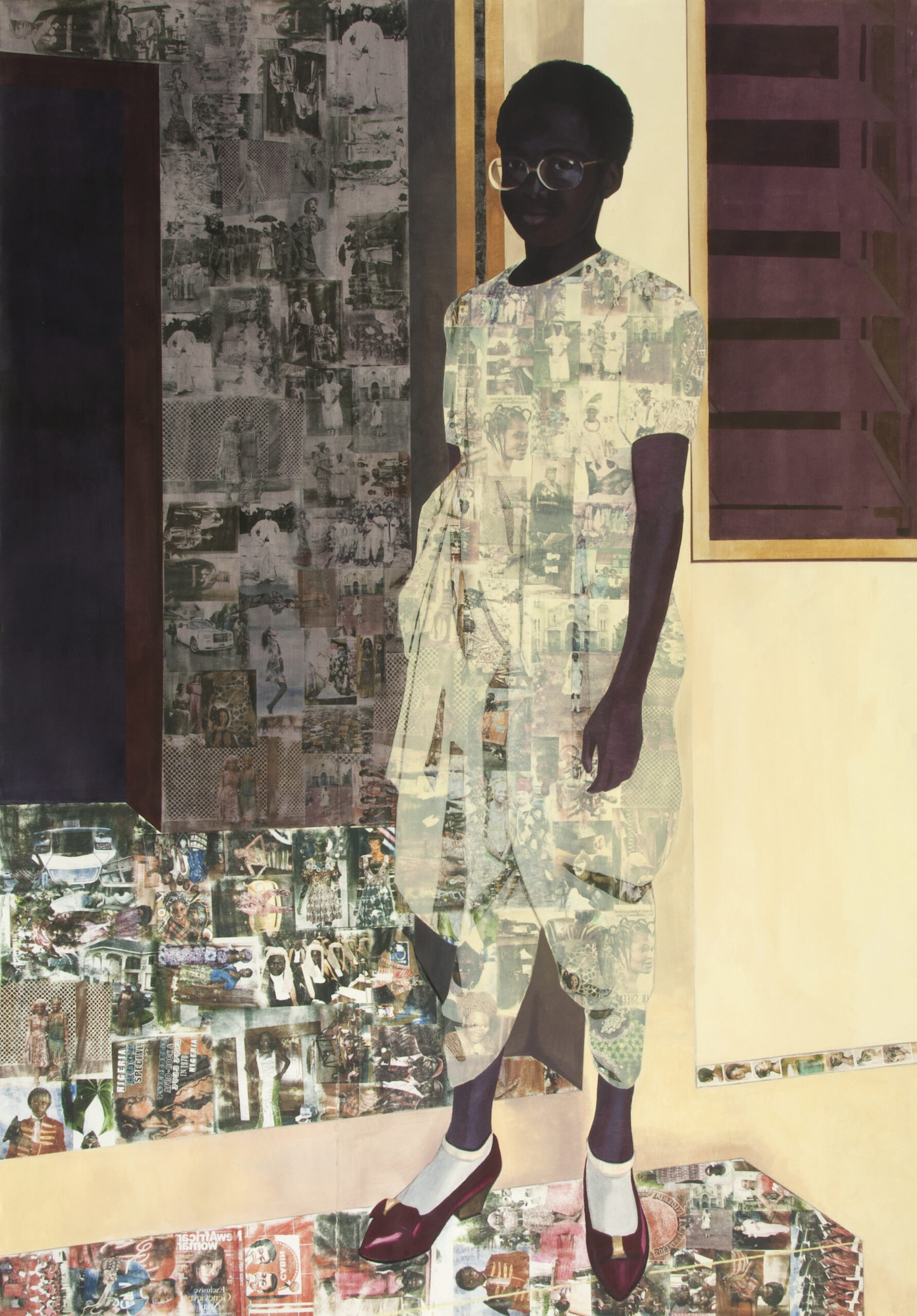 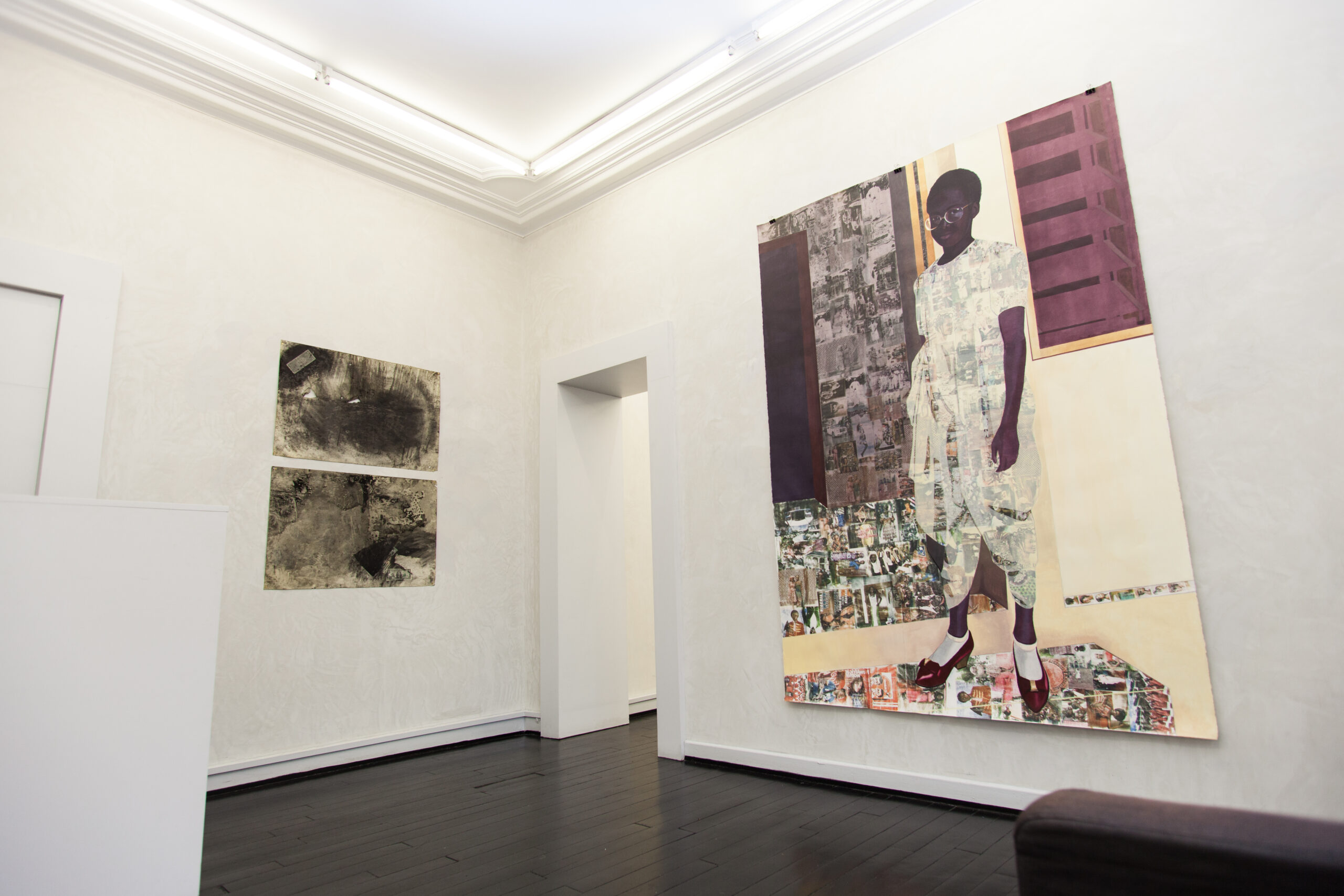 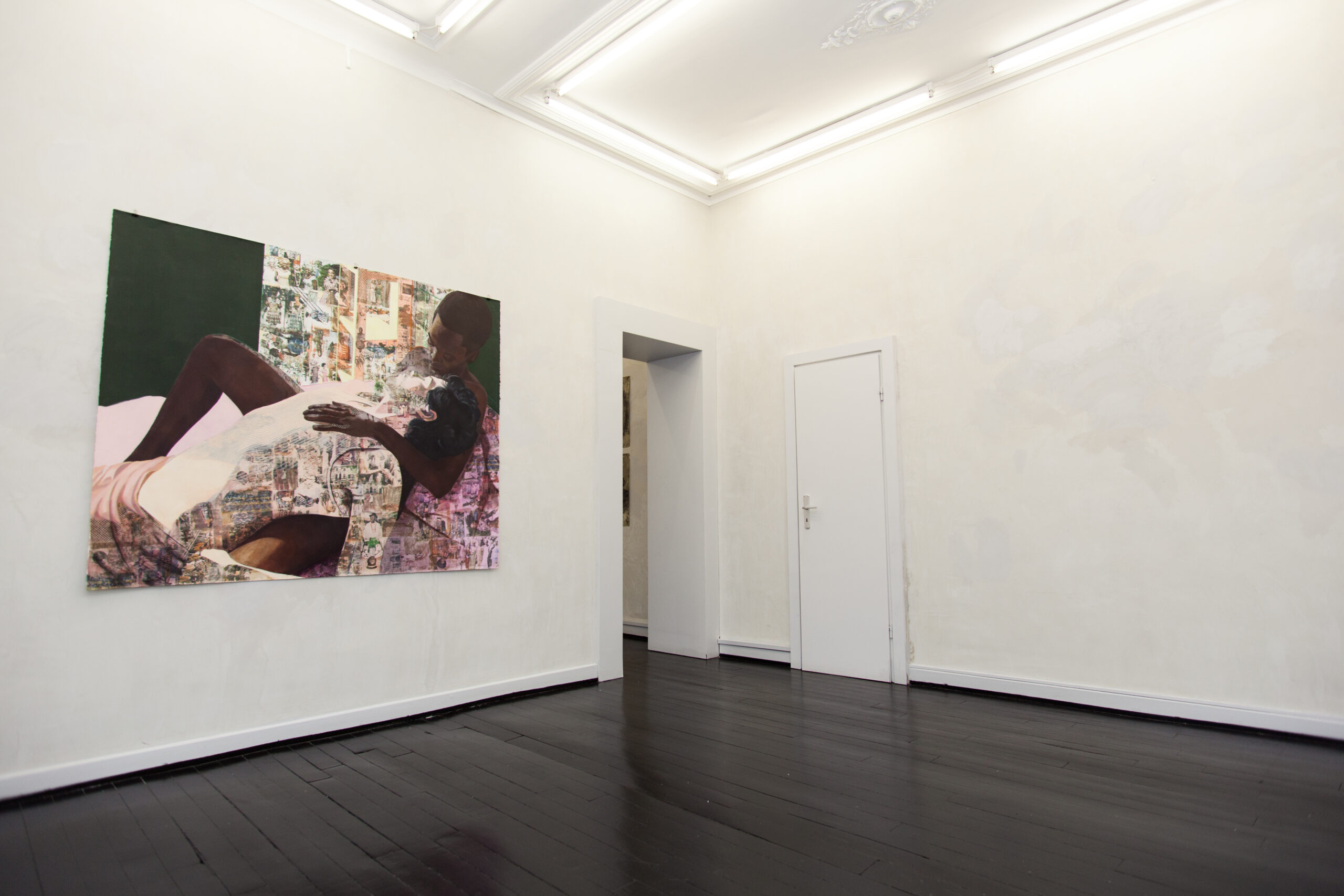 Young graduated from Yale in 2011, Njideka Akunyili was directly selected for the Studio Harlem residency program in 2011-2012 and its exhibition wich she completly fitted since she uses appropriated source material and imagery, mediating and reinterpreting their initial contexts through painting. A primary source is original documentation of a specific historical moment, often used to inform later interpretations or analyses of that time period. For her, such material provides the starting point for artistic practice that is deeply invested in histories—recent and distant, personal and global—to make artworks situated in the immediate present.

Njideka Akunyili prints small images of the Nigeria she experienced into larger self-portraits. She creates art that mix collaged elements consisting of cut decorative patterns revealing narrative motifs based on her cultural experiences living in her home country of Nigeria, family, landscapes, thus making a metaphor for her history’s active presence in her daily existence.

She gathered family photographs from her wedding in Nigeria for example and searched on the Internet for images by her favorite Malian photographer, Malick Sidibe. She then scanned the fragments and Xerox-transferred them onto large pages, cut the figures out and moved them about like jigsaw pieces. She works on canvas but most of her work is on paper for various reasons ; the foremost being that the soft highly absorbent quality of certain printmaking papers for transfers and also for the delicacy to it. She feels most invested in a piece when she works from people she knows and cares about. The personal narrative part of the work is one of the many layers that make up her studio practice.

In her work disparate elements clash together to give rise to a distinctive yet cohesive whole. She refers to an interstitial space of negotiation. This in-between/liminal space is referenced a lot in post-colonial ; Akunyili refers her work to Professor Homi Bhabha’s theory of hybridity and the ‘third space,’ in which cultures come together to create a new hybrid social space, a transcultural space of constant engagement and appropriation.

Her art addresses her internal tension between her deep love for Nigeria, her country of birth, and her strong appreciation for Western culture, which has profoundly influenced both her life and her art. She uses her art as a way to negotiate her seemingly contradictory loyalties to both her cherished Nigerian culture that is currently eroding and to her white American husband. Most of the Nigerian traditions she experienced growing up are quickly disappearing due to the permeation of Western culture. Her art serves as a vehicle through which she takes us in an exploration of her conflicted allegiance to two separate cultures.

Its presence is autobiographical, in Njideka’s big collage paintings two figures, a black woman and a white man, recur: portraits of the artist and her American husband. Both figures seem to bleed into a background pattern of images cut from personnal pictures and clips from African magazines, as if to suggest that in Njideka’s world, old divisions between traditional and contemporary, Western and African, are false or at least permeable.

Her work is influenced by painters like Piero, Velasquez, Manet, or Degas and more recently Kerry James Marshall, Wangechi Mutu or Malick Sidibé. Litterature coming out of Nigeria and the African diaspora also play a part in the development of her work.

Born in Enugu, Nigeria, in 1983, US-based artist Njideka Akunyili is fast becoming the art world’s newest star. At Art Basel 2011 five of her large figurative collage paintings sold out in just half an hour. She was selected for the prestigious Studio Harlem residency program in 2011-2012 and one of the three artists in its exhibition Primary Sources (June 14, 2012 – October 21, 2012), an impressive feat for the recent Yale University MFA graduate.

Abigail DeVille is a US-based artist from New York City. Her work presents the viewer with a visible representation of the invisible. This gesture is an ongoing thread within DeVille’s work that attempts to give a voice to people within American society whose stories and narratives have continually been overlooked. She warps the time of physical objects, and these objects speak to the physical infinite expanse of universal time and societal ills of the present moment. DeVille looks at the entirety of a historical situation and marks how it is incessantly cyclical.

Abigail DeVille amasses bricolage, painting, and sculpture into a selective history of culturally invisible classes of people as a means of reflecting upon the material culture of the present moment. DeVille constructs environments in which the chaos of excess reveals the impossibility of a consistent narrative. Saturated with images and material in various states of decay, the visual landscape of her projects suggests the unruly nature of history.

Abigail Deville’s projects pose a consideration of the manifold problems within American society by tying together threads of influence ranging from African sculpture, textiles, popular culture, her domestic effects and material she sources from the streets. She experiments using found and inherited domestic objects in order to make a connection to the universe. The concept of double-consciousness is the conceptual frame of the artist. Combined with an awareness of social issues, Deville’s works are situated between considerations of subjectivity and the sublime.

DeVille’s work addresses an interwoven racial subtext that highlight enduring racial tensions. She engenders a consideration of what black is within a larger historical framework. Her ambition as an artist is to make visible the toxic and inauthentic society in which we are enmeshed.