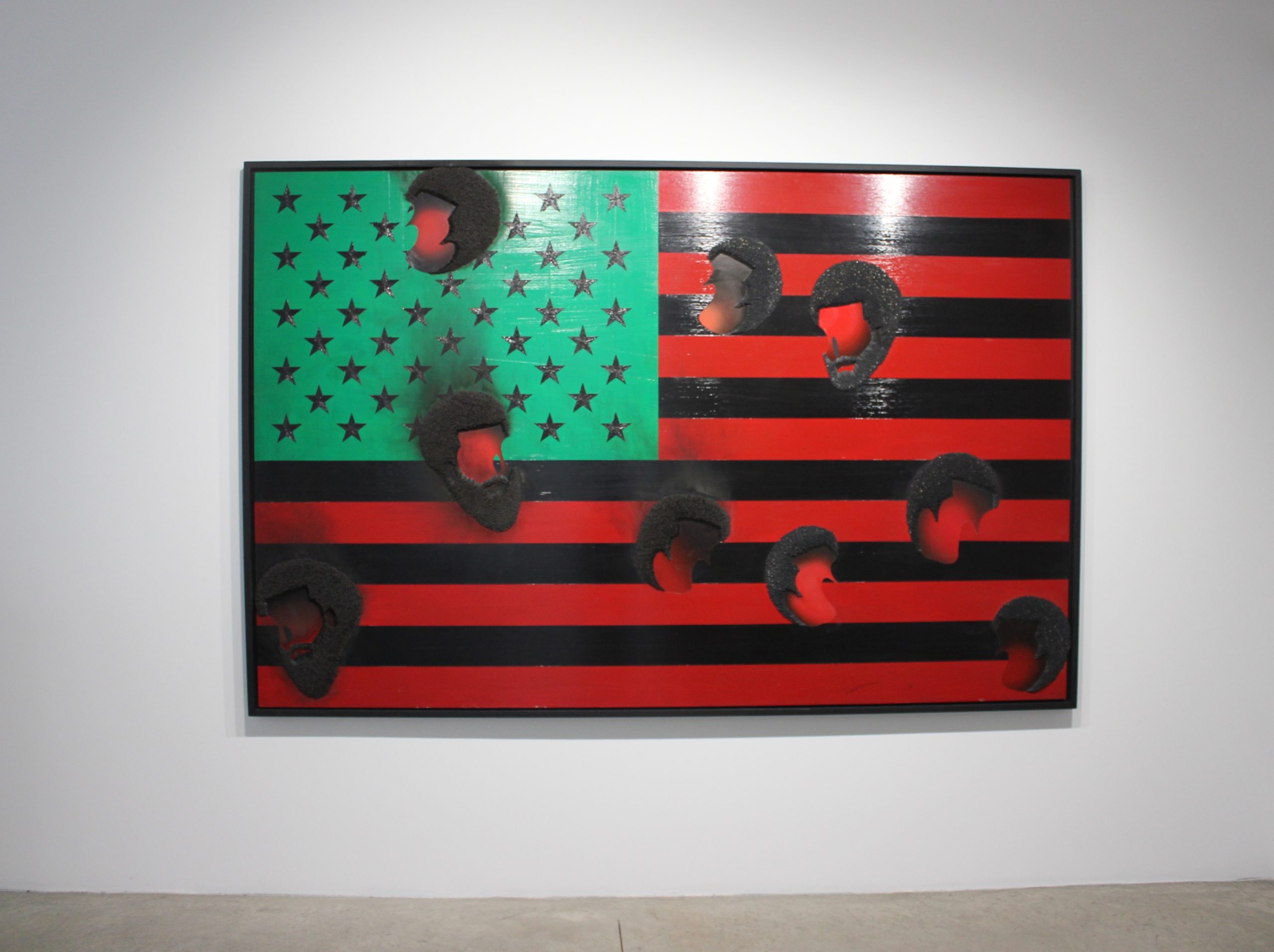 Zidoun-Bossuyt Gallery is pleased to present an exhibition of new works by the US artist Jeff Sonhouse. This is the artist’s first solo exhibition with the gallery and his first solo presentation in Europe. 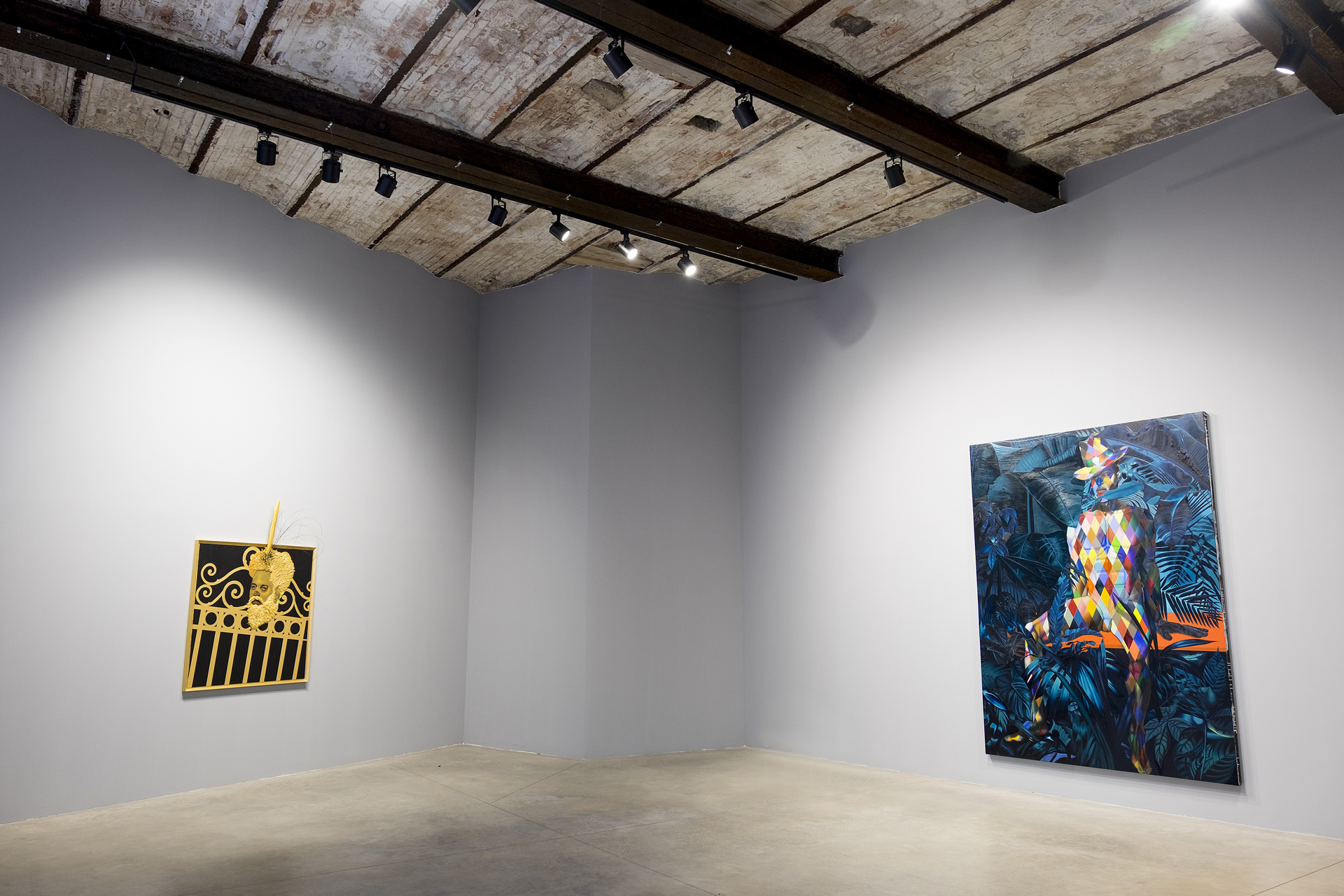 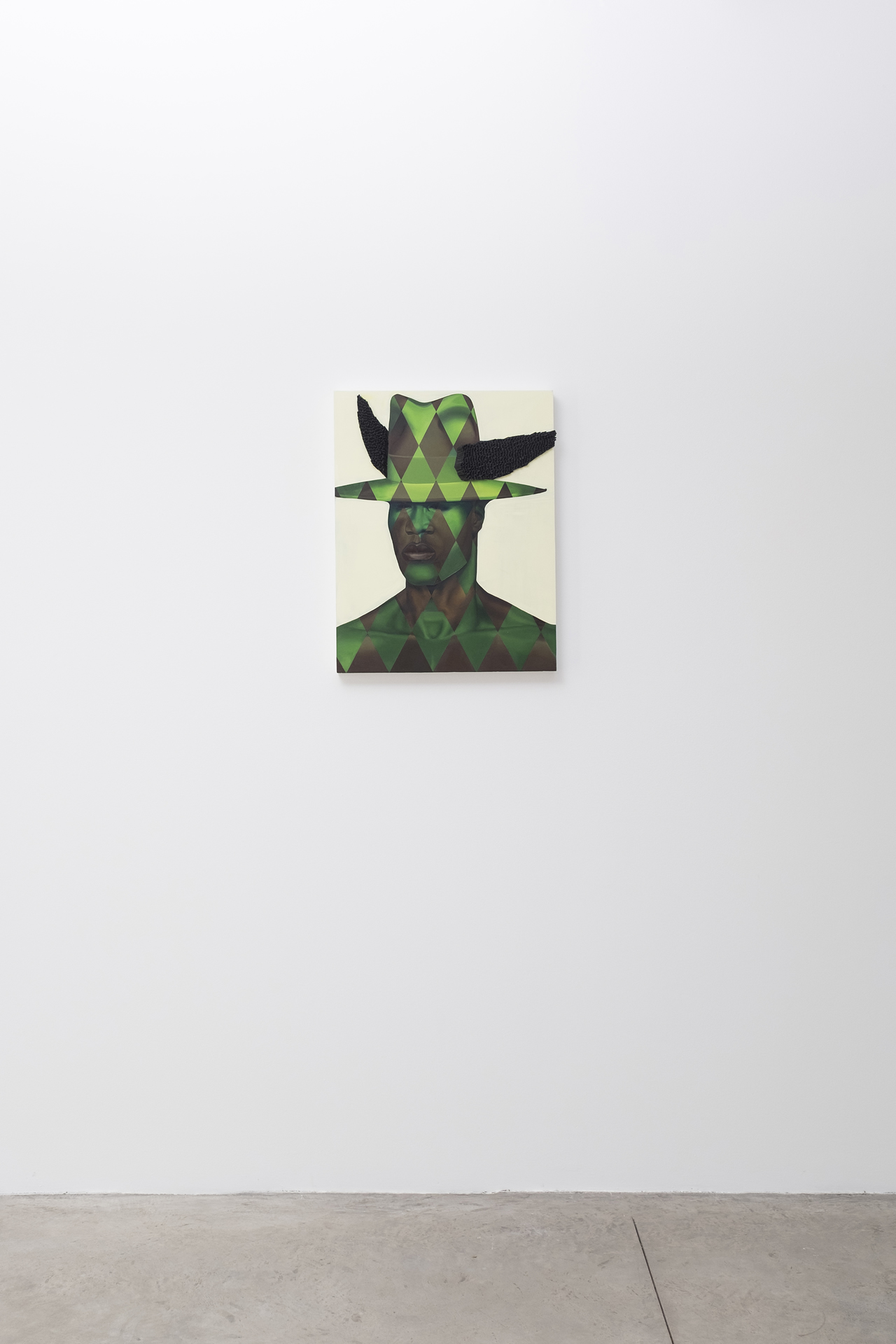 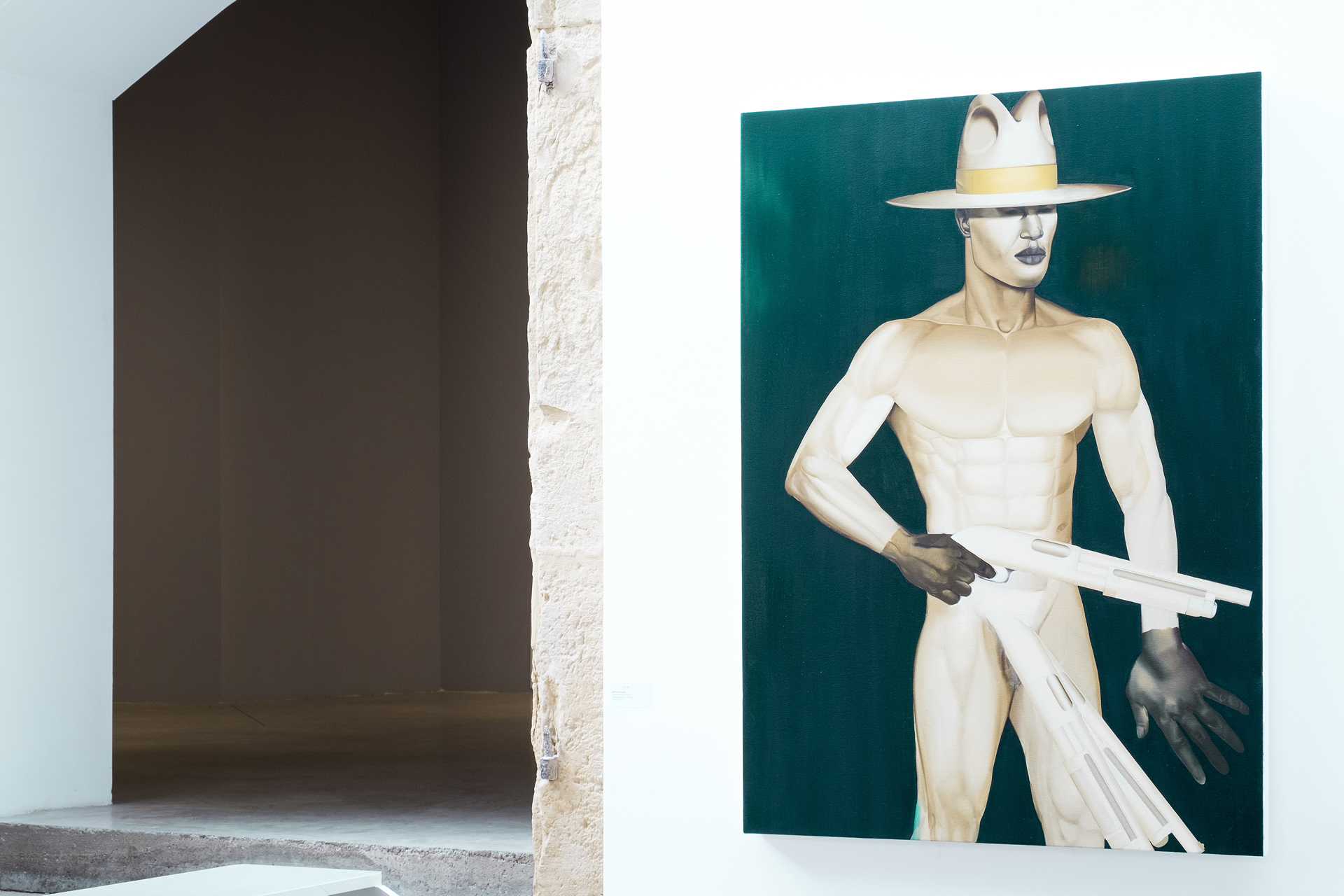 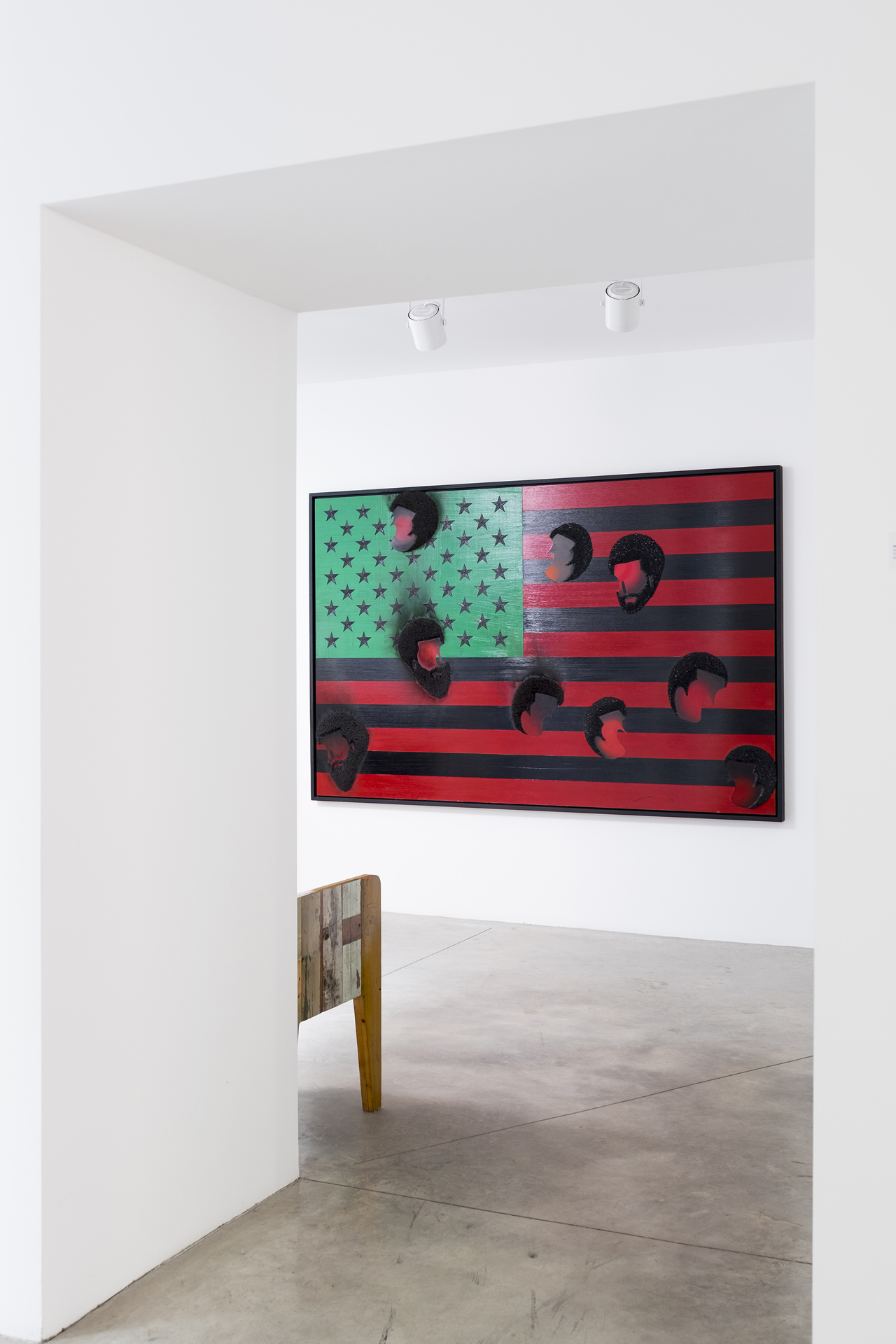 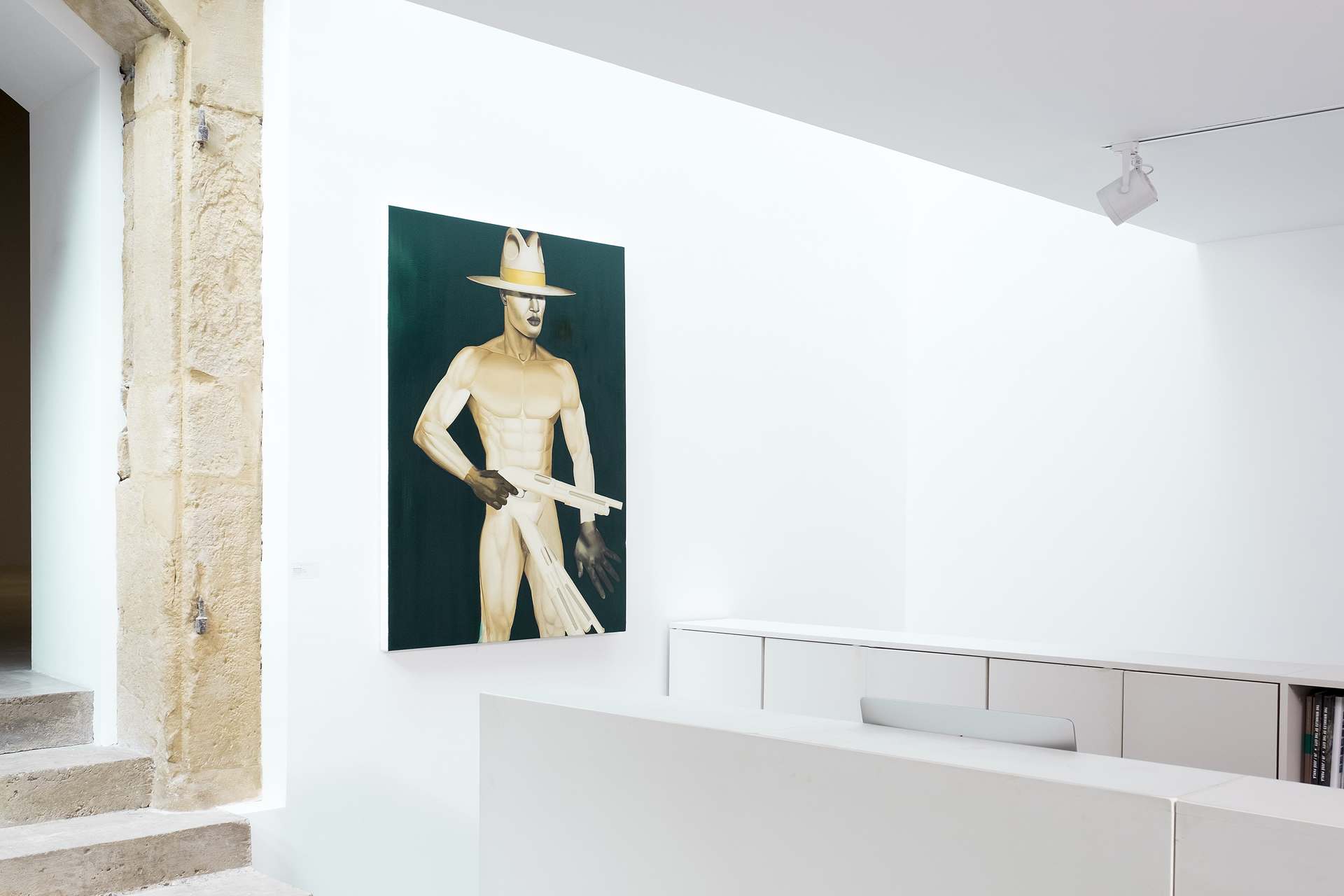 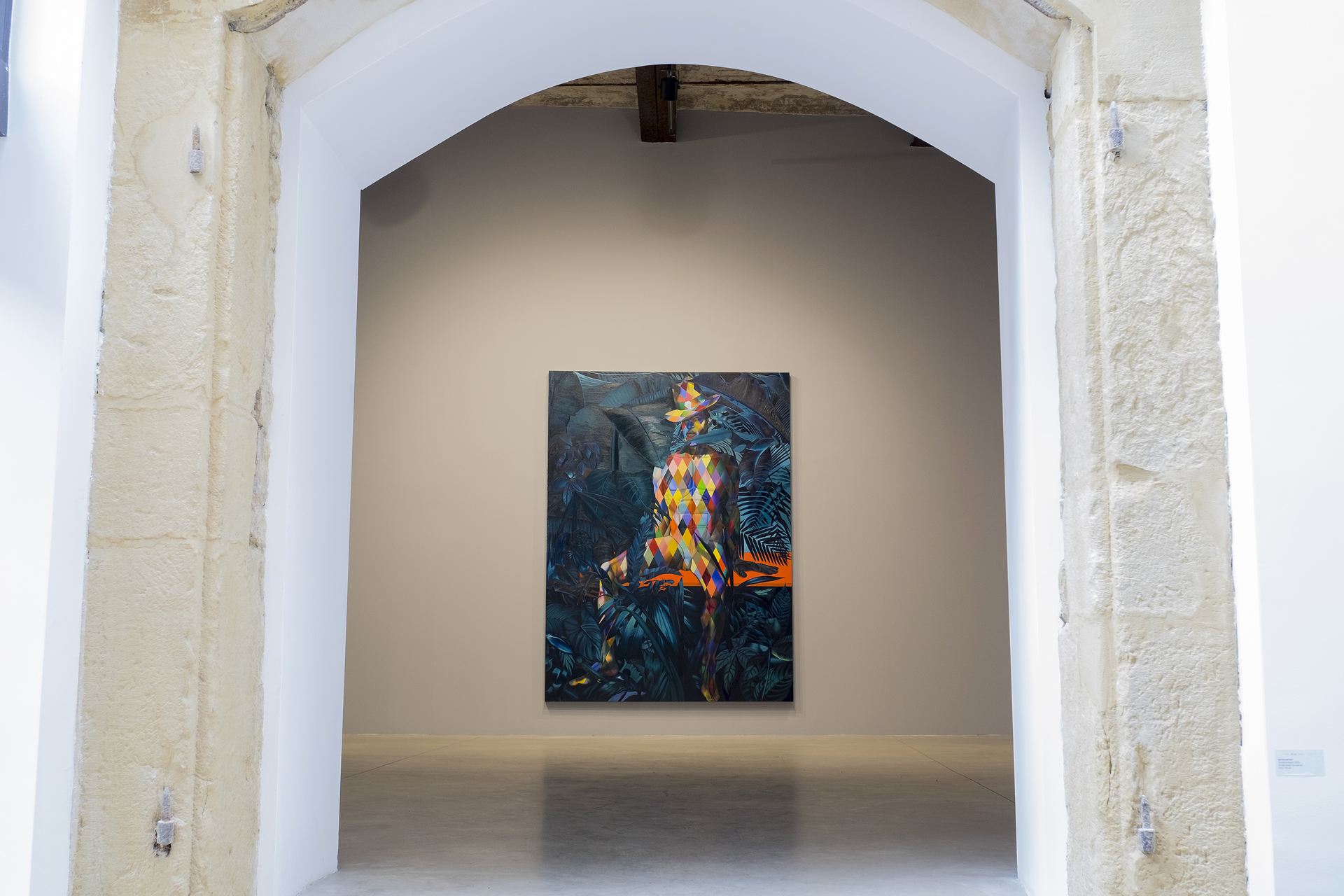 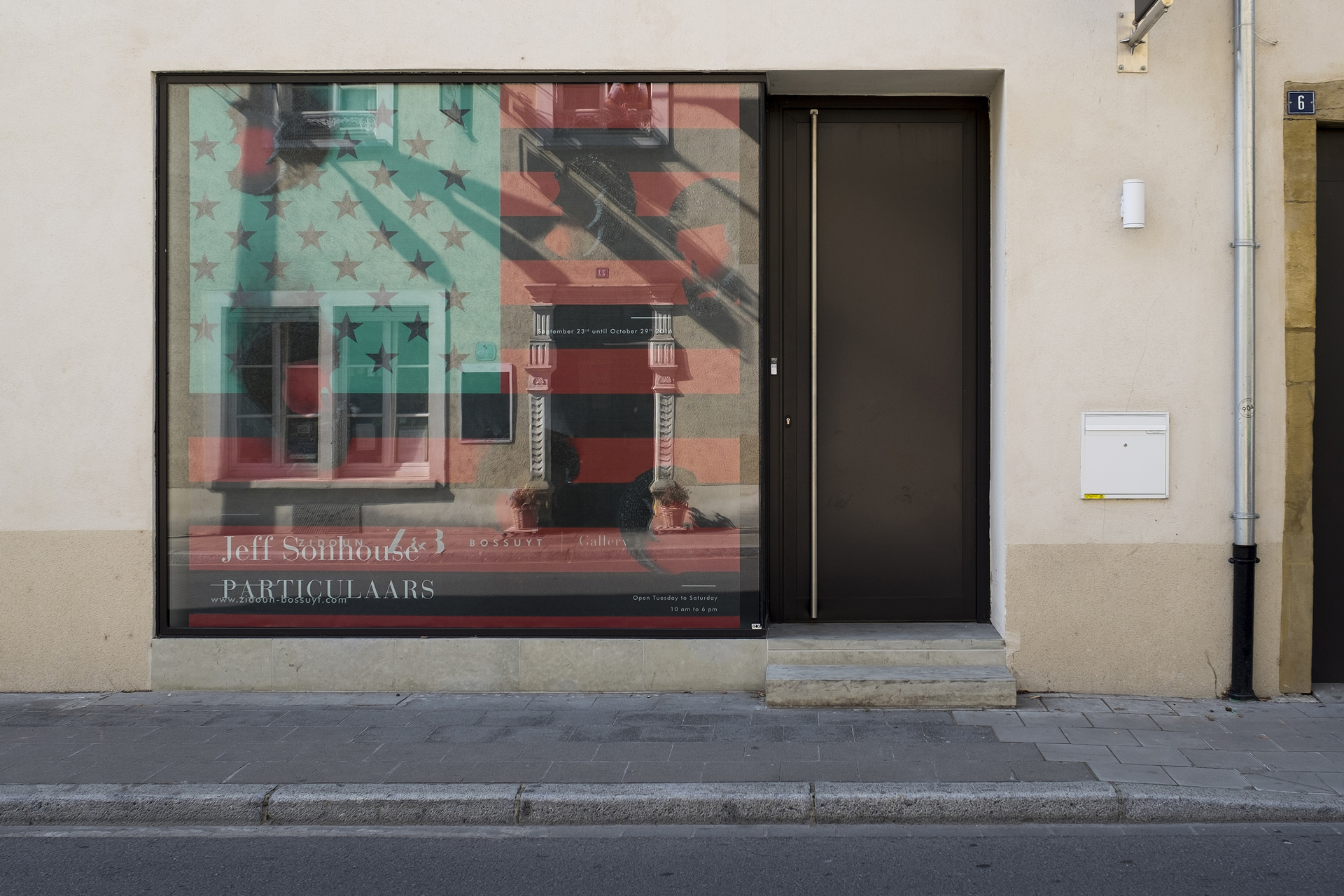 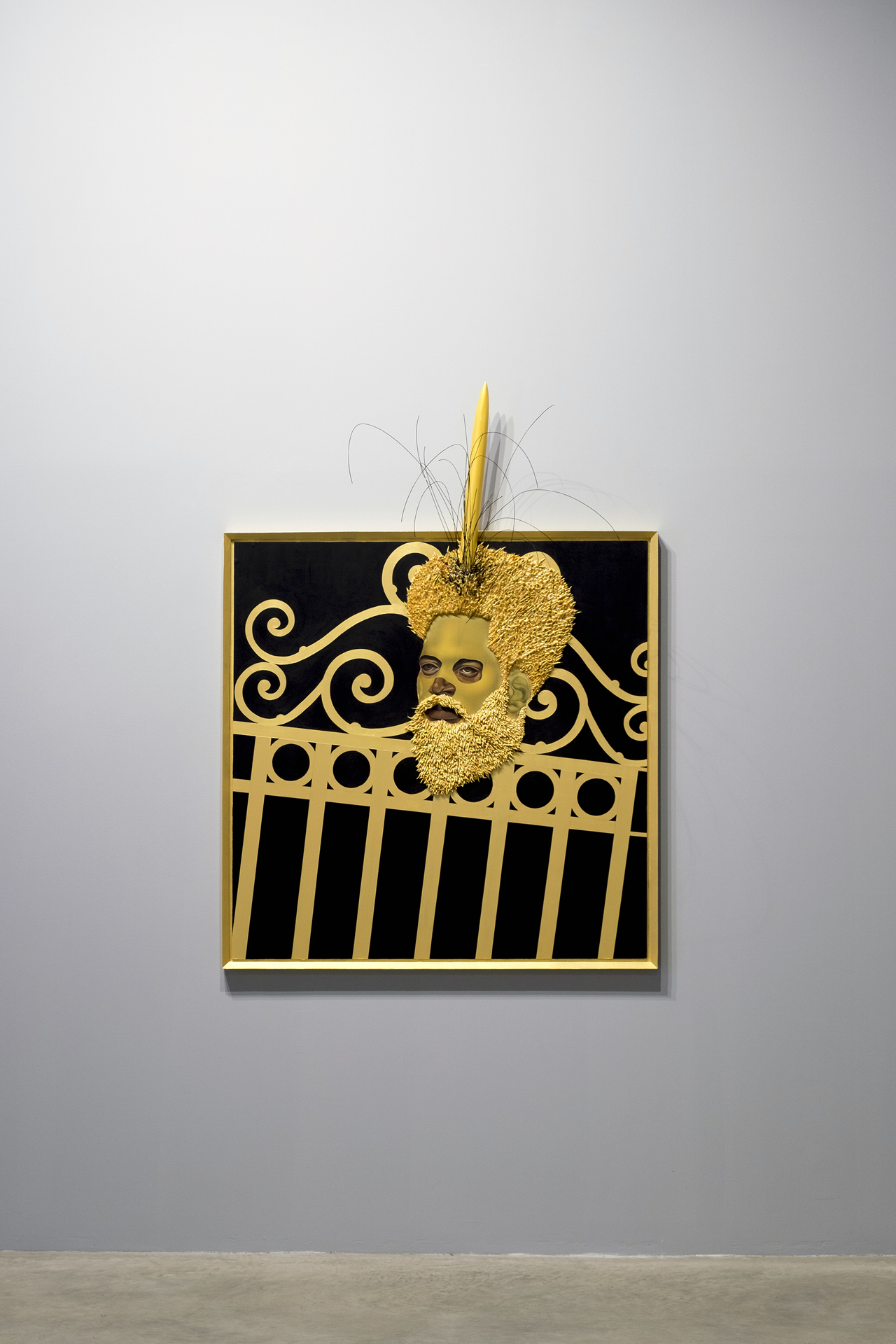 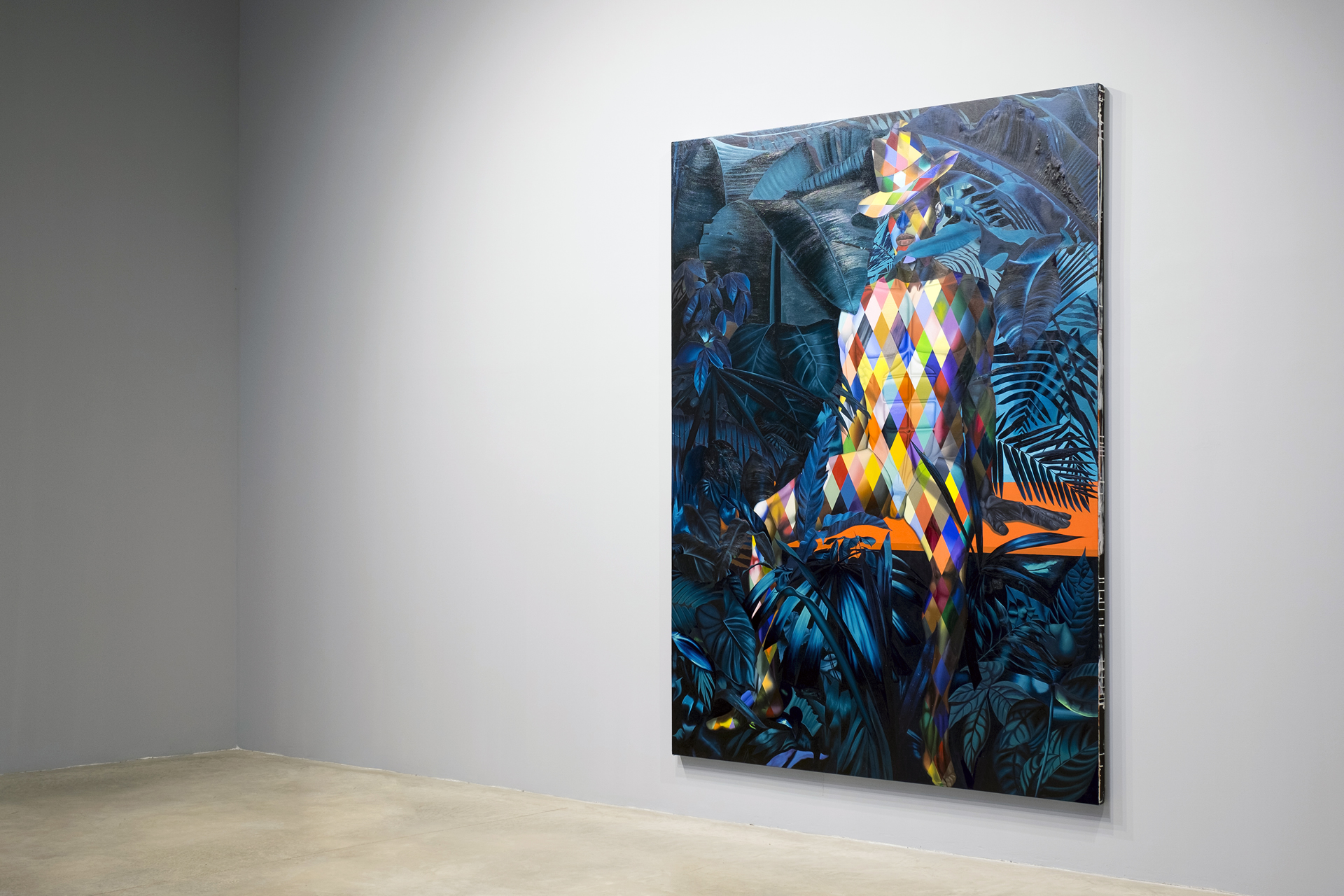 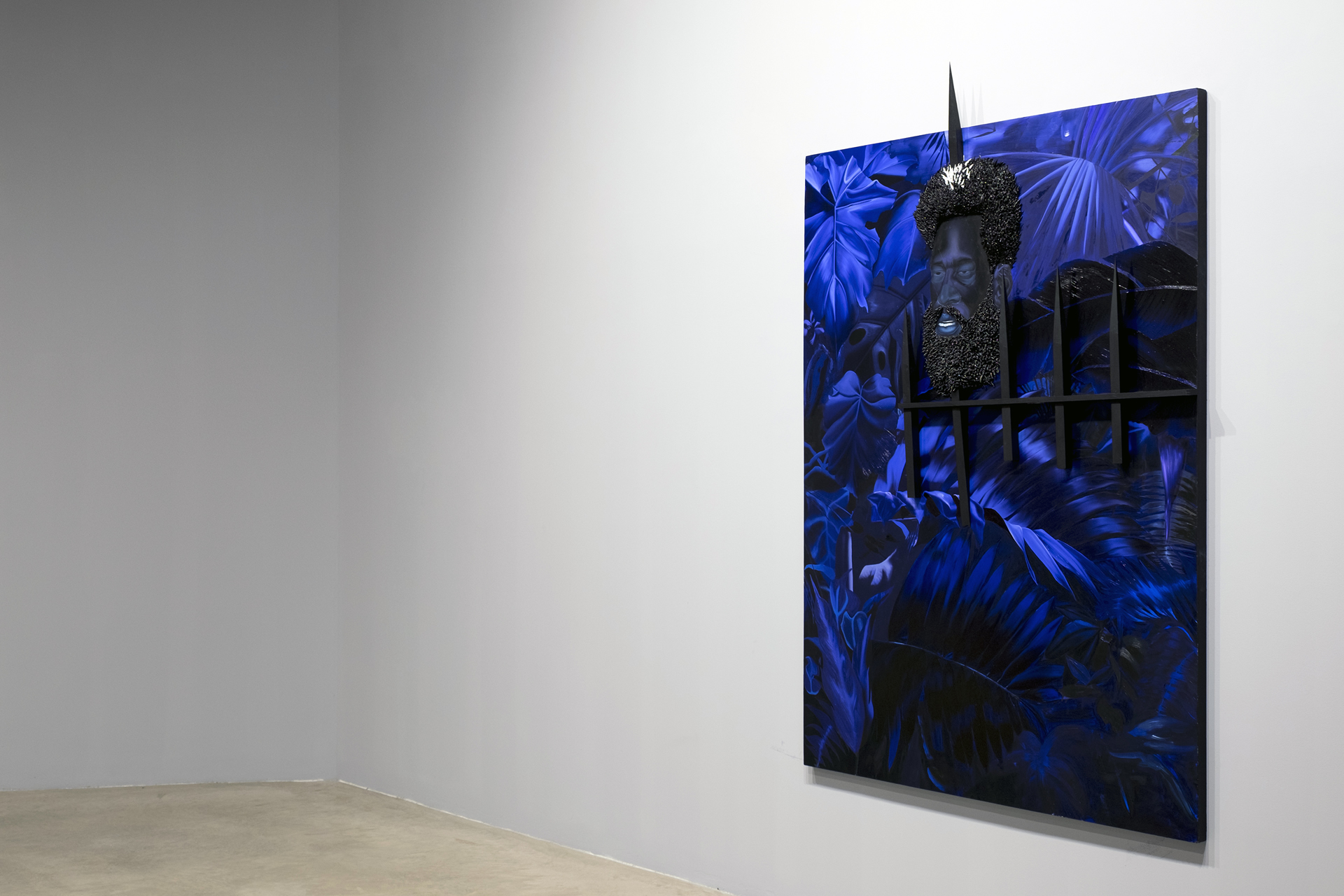 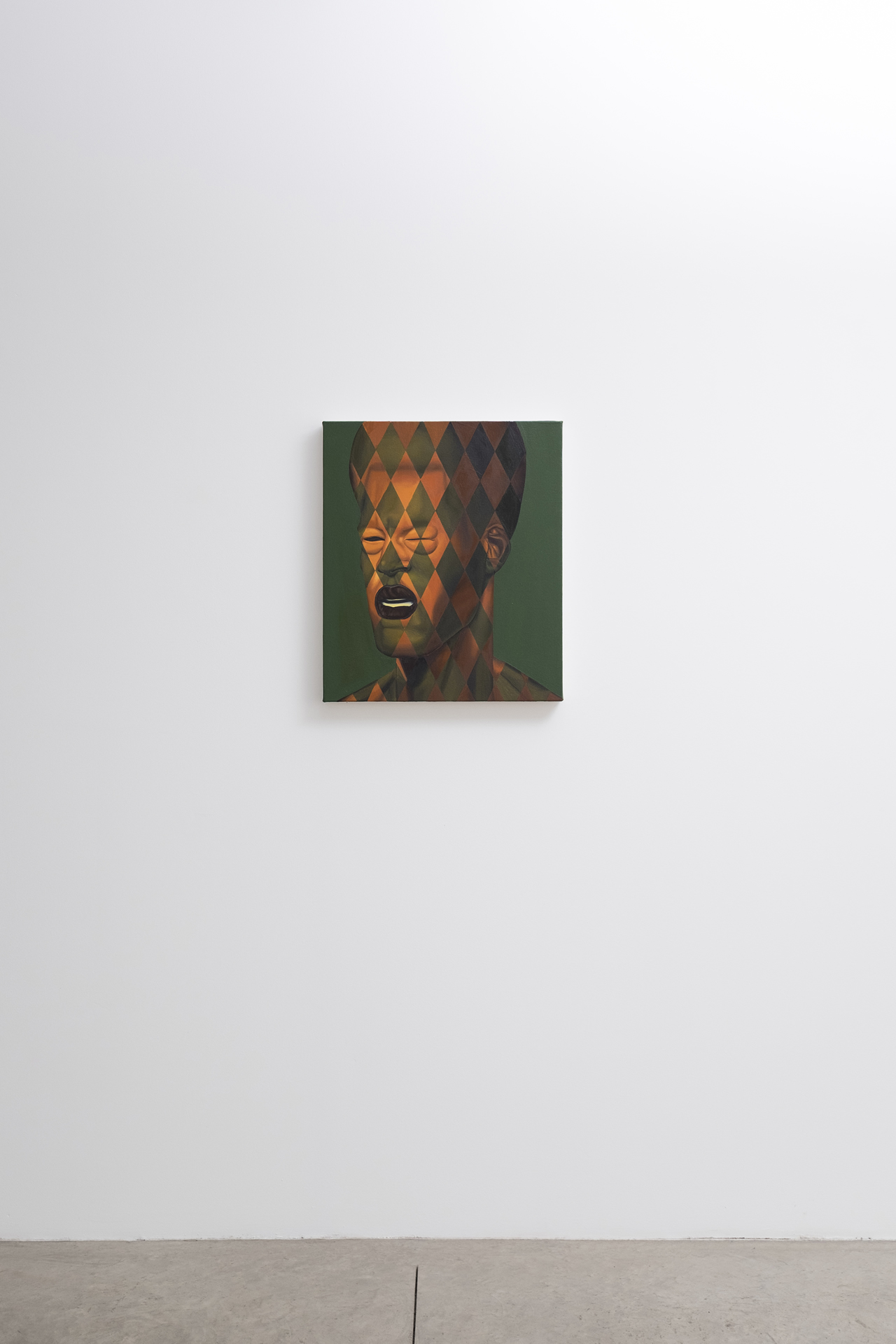 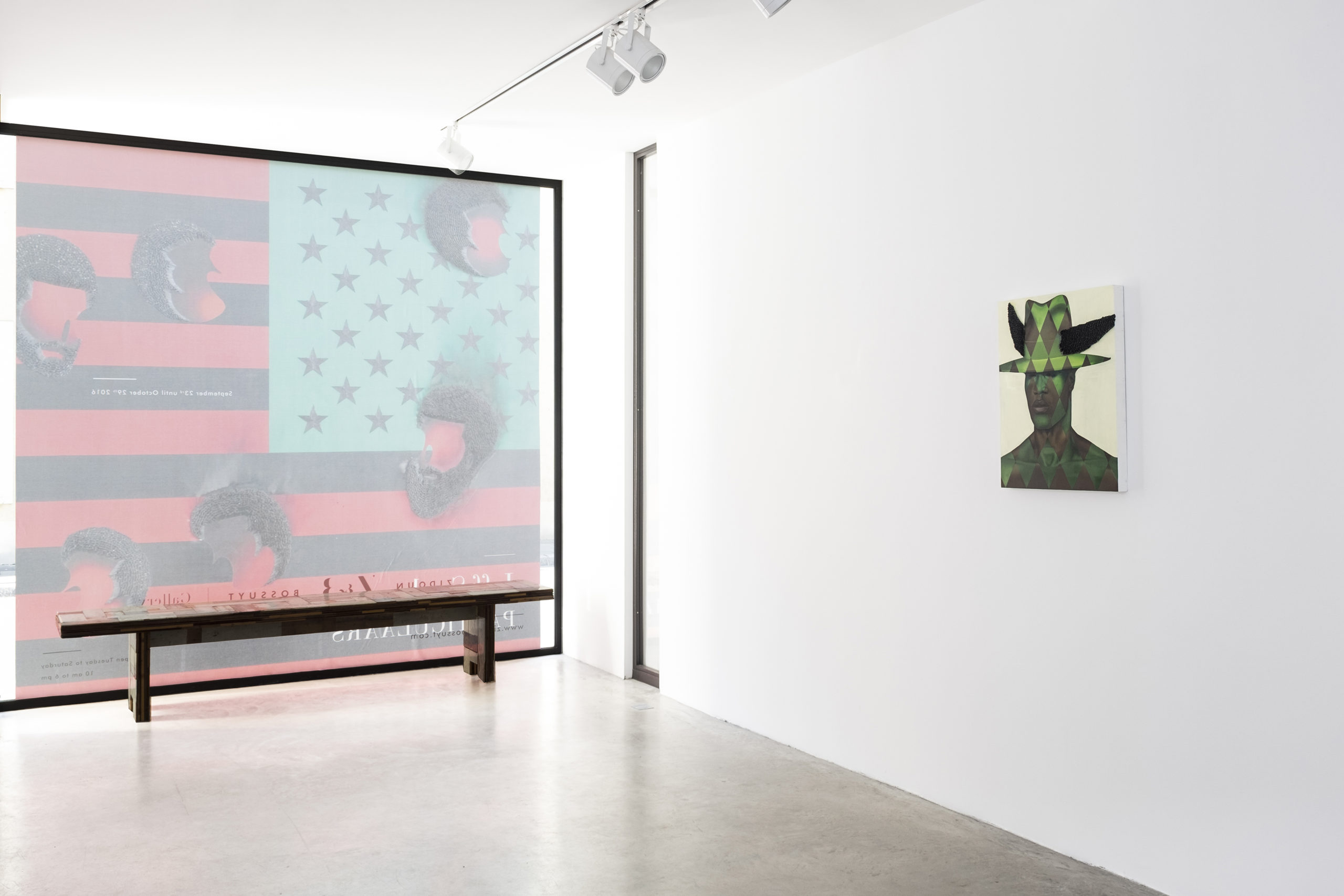 Over the past ten years, New York-based artist Jeff Sonhouse has created a powerful body of portrait paintings depicting often-masked black male figures that consistently defy and obscure classification. Sonhouse uses masking to reveal as well as to conceal issues of identity in our culture.

Sonhouse’s most striking use of mixed media affixed to the canvas involves matches. These are spliced, painted and layered, often forming large Afros. He lights and extinguishes these matches, sometimes leaving the imprint of smoke on the canvas, often burning right through the canvas. Evidence of the burning becomes part of the work. The matches, smoke and burned areas seem to hint at the incendiary nature of race relations in America, made worse by the kinds of representations that Sonhouse draws. In these portraits, the anger mixes with wit and Sonhouse avoids sanctimony.

Sonhouse’s paintings include references as varied as traditional African masks, art historical figures as Romare Bearden, Charles White or Pablo Picasso. For the exhibition, the artist borrowed particular works of various artists for their prized possessions in order to appropriate what he found made for an interesting painting, hence the title PARTICULAARS. Artists have appropriated works of other artist for centuries and Sonhouse’s new paintings are an examination into the admiration, denunciation and often-parodying leading artist to reference works by other artist.

In the painting CULPRIT STRANGE, Sonhouse borrowed Picasso’s Harlequin in an attempt to excavate what the artist took from African sculpture and use it to make an interesting painting. CULPRIT STRANGE’s figure move painting into a third dimension in a play of vibrant colors, enlivened with harlequin patterns and fantastical settings.

OUR BLUES DON’T JIBE refers to The Black Liberation Flag, also known as the Afro-American Flag, symbol of African and African-American unity and pride. In the 1960s this flag became a symbol of Black liberation in the United States. This design was first adopted in 1920 and popularly known today as the Garvey flag, named after Marcus Garvey.
The red represents the blood shed in the struggle for liberation. The black color represents the Black race, the green color represents the natural resources of Africa from where the Black race comes from.

For Ian Berry, director of the Frances Young Tang Teaching Museum and Art Gallery, the power of Sonhouse’s paintings comes from his unique play on traditions such as: “the formal portraiture of Picasso and the outside edge of pop from the ‘60s and ‘70s.” Berry explains Sonhouse “is of a generation of African American artists that are pushing against race as the only way to find meaning in contemporary portraiture and, in turn, makes paintings that resist categorization”.

Jeff Sonhouse was born in 1968 in New York. He holds his MFA in painting for the Hunter College and won the Joan Mitchell Foundation awards and the New York Foundation for the Art prize both in 2004.
Jeff Sonhouse has had numerous gallery and museum exhibitions, including the Atlanta Contemporary Art Center in 2003, the Studio Museum in Harlem in 2005 , The Rubell Family Collection in 2009-2013 , the Nasher Museum of Art at Duke University in 2011, and was part of the Bearden Project in this same museum in 2012. He held his first retrospective at the Tang Museum in 2014.