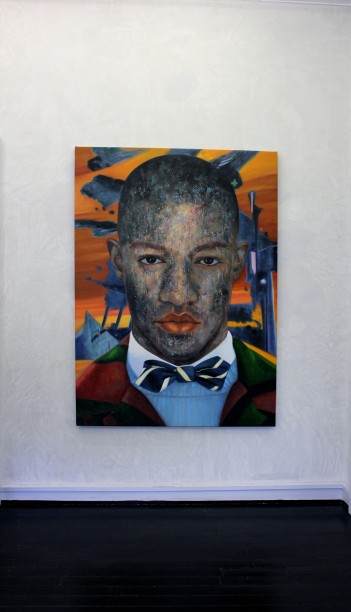 Preview on Thursday April 11th, 2013 from 6pm in presence of the artist. 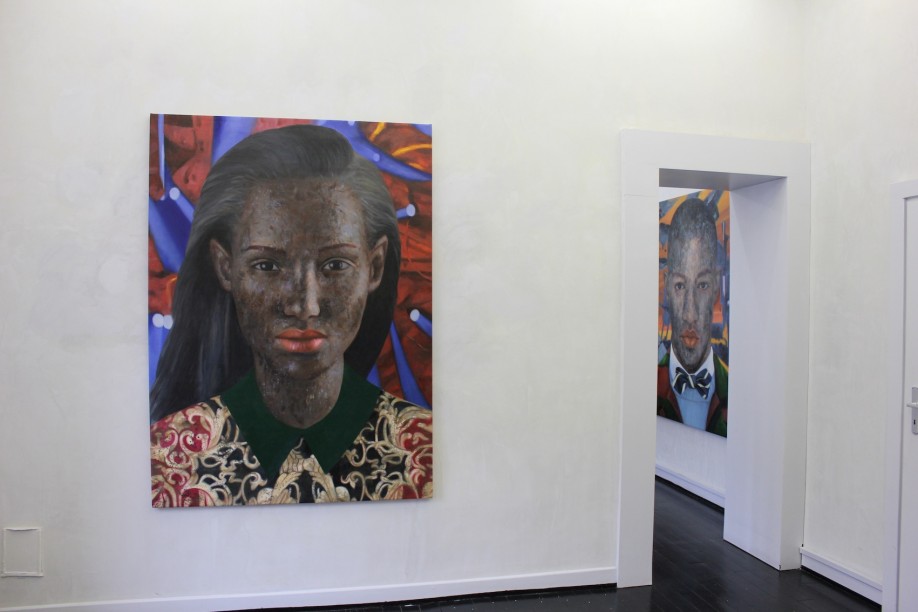 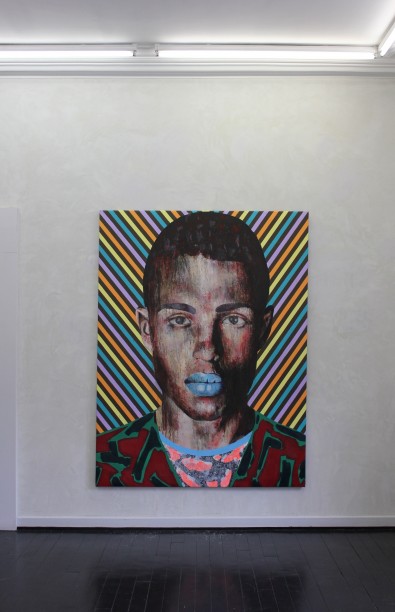 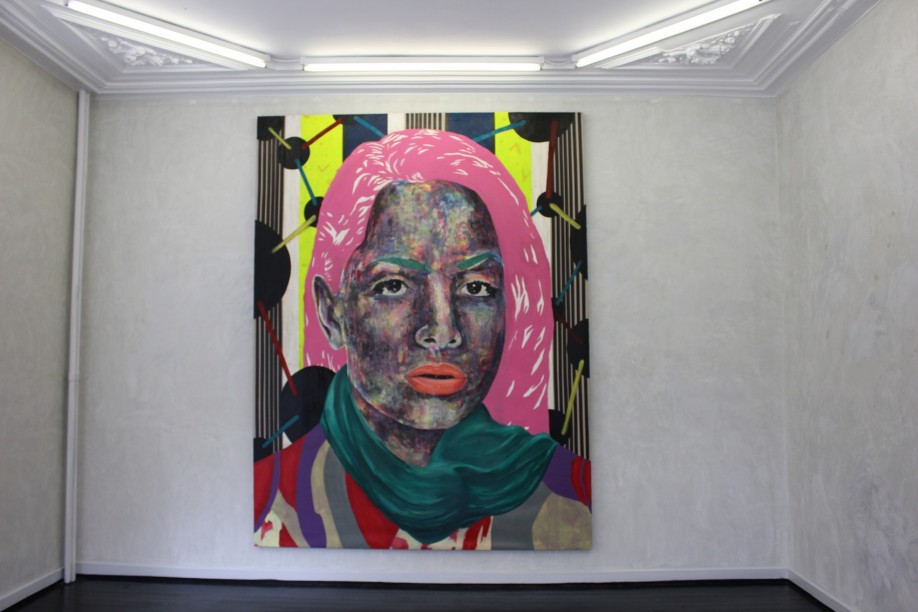 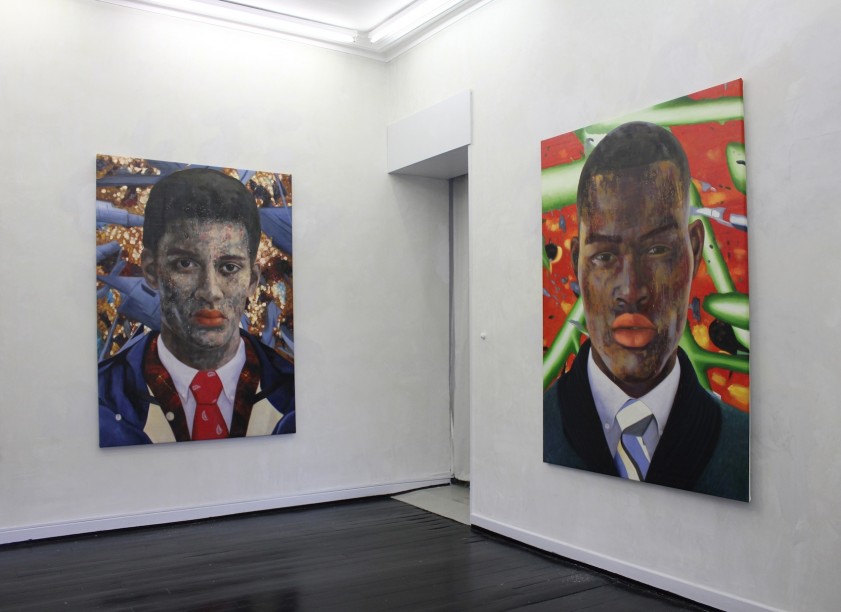 The latest solo show by Mustafa Maluka entitled ‘Structural Disbelief: an imposition’, deals with the social and political structure of prejudice and the various ways, both subtle and overt, in which people are pre-judged and dismissed because of their appearance.

The show tackles the structural disbelief faced by successful, high achieving people who appear as ‘others’ within particular societies. It also explores fragments of dialogical transaction to which the characters in the paintings are subjected to as individuals who appear as ‘other’ within the societies that they live in.

Mustafa Maluka is an artist and a cultural analyst. Known for theatrically confronting the intersection of contemporary culture and global politics with his provocative large-scale portraits. Maluka’s imposing canvases document the artist’s continued interest in the tradition of portraiture mixed with a street culture edge.

These oil and acrylic paintings are grounded by traditional techniques like massive scale and central composition, calculated to emphasize the importance of the sitter. Maluka deliberately situates them within the canonical heritage of the portrait genre.
The faces of his transnational, racially ambiguous characters are densely painted. He achieves this by building up layers of splashes and washes on the canvas surface alongside bold patterns and forms that determine the mood and overall tone of the works. The emotions are silent but strong.

Technically, this is a simple maneuver. Maluka repeats his standard modus operandi of an abstract background and a linear description of the subject’s features. In a move that almost defaces this, he overlays vast paint washes or thickly scumbles up areas, sometimes viciously jabbing at the canvas with his paintbrush. In this process he variously coaxes and manipulates the image until it reflects more about Mustafa Maluka than the original source. The interpretive lens of the artist is very apparent. The faces are palimpsests burying the original inspiration beneath layers of calculated colour.

Mustafa Maluka’s portraits of imaginary people from different cultures evolve from photographic images which catch his eye in magazines and on the internet. He is drawn to images of people who have a particular look, that project a particular energy and pride, a connecting gaze and a presence, from an array of visual and literary references ranging from fashion, design, art history, but also cultural analysis, philosophy and psychology, which results in a deliberate hybridisation and internal cross- referencing among the works. Maluka collects images with a particular gaze, a particular strength and pride that he uses as a starting point. From there, the lengthy process of editing and mixing of these images begins before they are used in the production of his paintings.

This is further reflected in the work’s titles that play into the narrative of the paintings. His monumental portraits are given titles that are phrases from song lyrics; accordingly, they become metaphors for sentiments and emotions rather than a representation of a sitter.

The many layers of paint allow them to appear as characters with a distinct personality divorced from their original context. Maluka liberates the images from their original context and recreates them in a new form. They often seem calm, composed and sublime. By denying his figures their original context, he refutes the culture industry’s dictatorial power to determine how we understand these images and instead insists upon the ability of the artist to interview these images on his own terms. Mustafa Maluka’s large-scale portraits often have a provocative and direct effect on the viewer. The artist is deeply concerned with contemporary critical social theory and world politics. His bright and colourful works are stylistically closely linked to pop culture, graffiti and hip-hop.

Maluka’s works refers to his own experience as a global citizen, where cultures morph and merge so quickly that even home is no longer a stable or recognizable place. Maluka’s works are informed by his experiences with his own outsider status. Through these experiences he has developed a critical and subversive strategy that is characteristic of his artistic practice.

Discussions around cultural identity and migration are of central importance to Maluka’s work. His works analyse the different experiences of those who, like the artist himself, were born and raised in another context; citizens of the world whose home is not a specific place, seemingly on an endless quest, yet at home everywhere. Maluka’s characters experience the translation of language as social practice. Mustafa Maluka presents the exploration of an emotional landscape filled with a cast of actors, who like the artist himself live a life in which communicative interaction is mediated by translation.

The narrative that the portraits mirror interrogates the ways one perceives the world around oneself through his or her everyday lived experiences. The portraits send messages, fluently and profusely. The audience’s reception and interpretation of these messages translate the narrative according to each viewers’ personal experiences. Thereby the viewer whether by choice or not becomes an actor in Maluka’s play.

Born in 1976, Mustafa Maluka grew up in Bishop Lavis, in the economically depressed Cape Flats area on the fringes Cape Townn Cape Town, South Africa. He came of age in Amsterdam, the Netherlands where he studied. He also passed by New York and Berlin.
Mustafa Maluka studied at De Ateliers art institute and the University of Amsterdam in the Netherlands. He now lives and works in Finland. He has been included in group exhibitions at the Snug Harbor Cultural Center (2010), the Studio Museum in Harlem (2008), De Moines Art Center (2008), the Stedelijk Museum Zwolle (2006) and the Contemporary Museum of Honolulu (2006). He also participated to the Sao Paolo Bienal, Brazil (2007) and international art fairs (ArtGenève 2013 and Art Abu Dhabi 2011). In 2009, his work made the cover of the first book on african contemporary art, writing by Sue Williamson, a key figure on the South African art scene since the early 1980s.