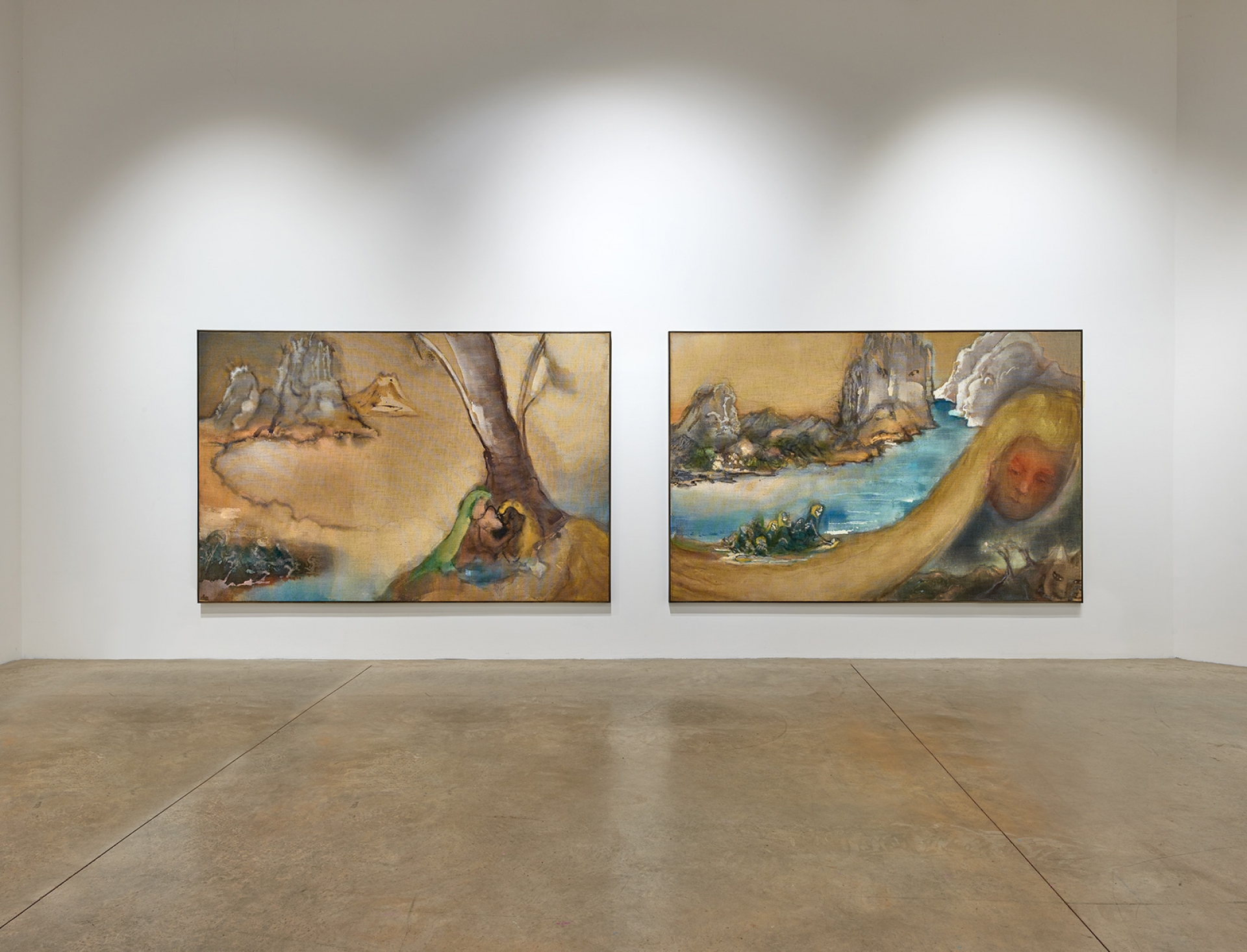 Following the government measures and in order to counter the increasing spread of the pandemic, the preview of the exhibition Jean-Charles Blais  Leiko Ikemura planned on November 11 is cancelled. Nevertheless, we have the pleasure to welcome you from this Saturday 7 November from 11 am to 5 pm at the gallery to discover the exhibition.
In order to comply with the current hygiene measures, the number of visitors inside the gallery will be limited and the wearing of a mask will be mandatory.

We would like to warmly thank our visitors, numerous in recent months, for their support, presence and interest. 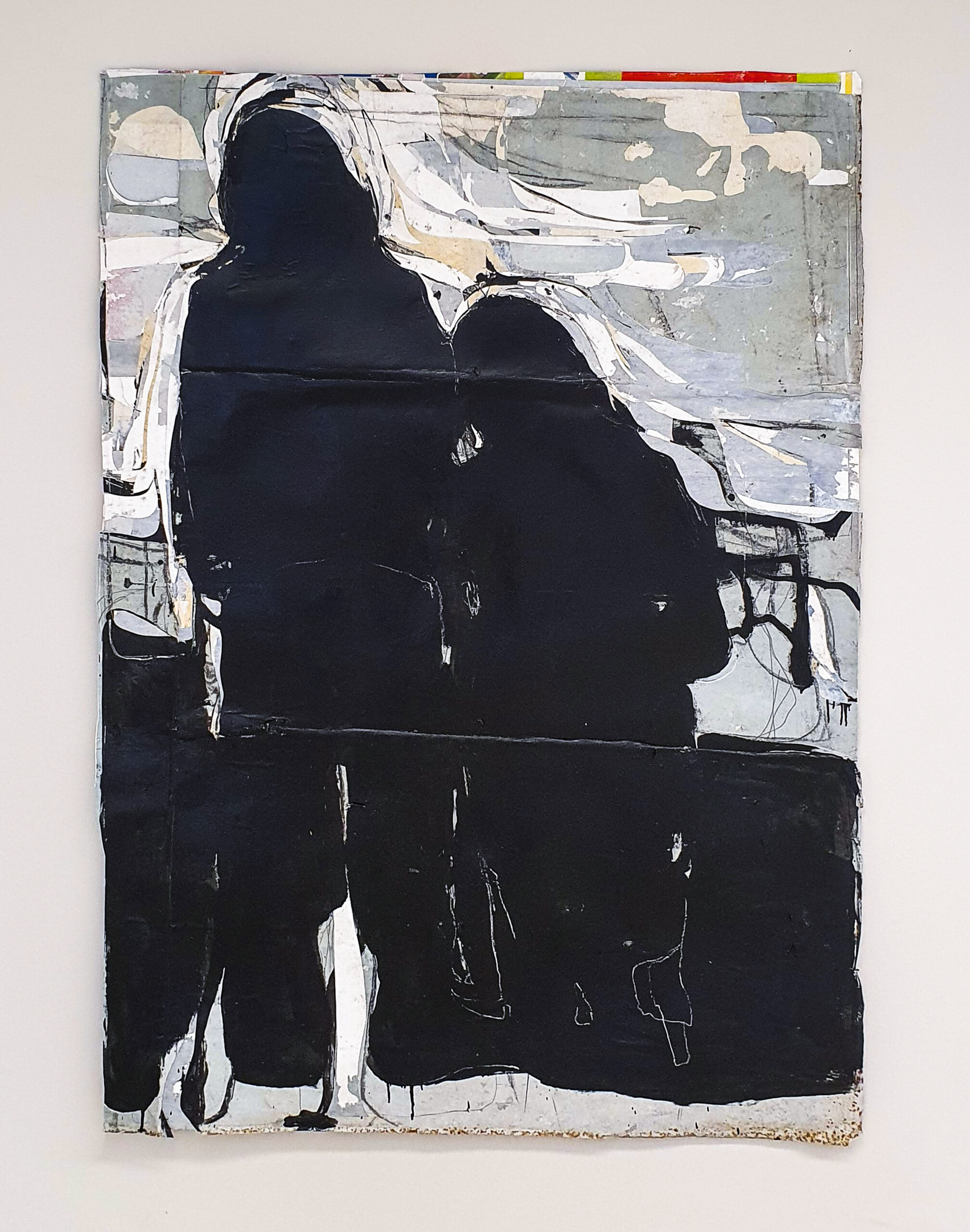 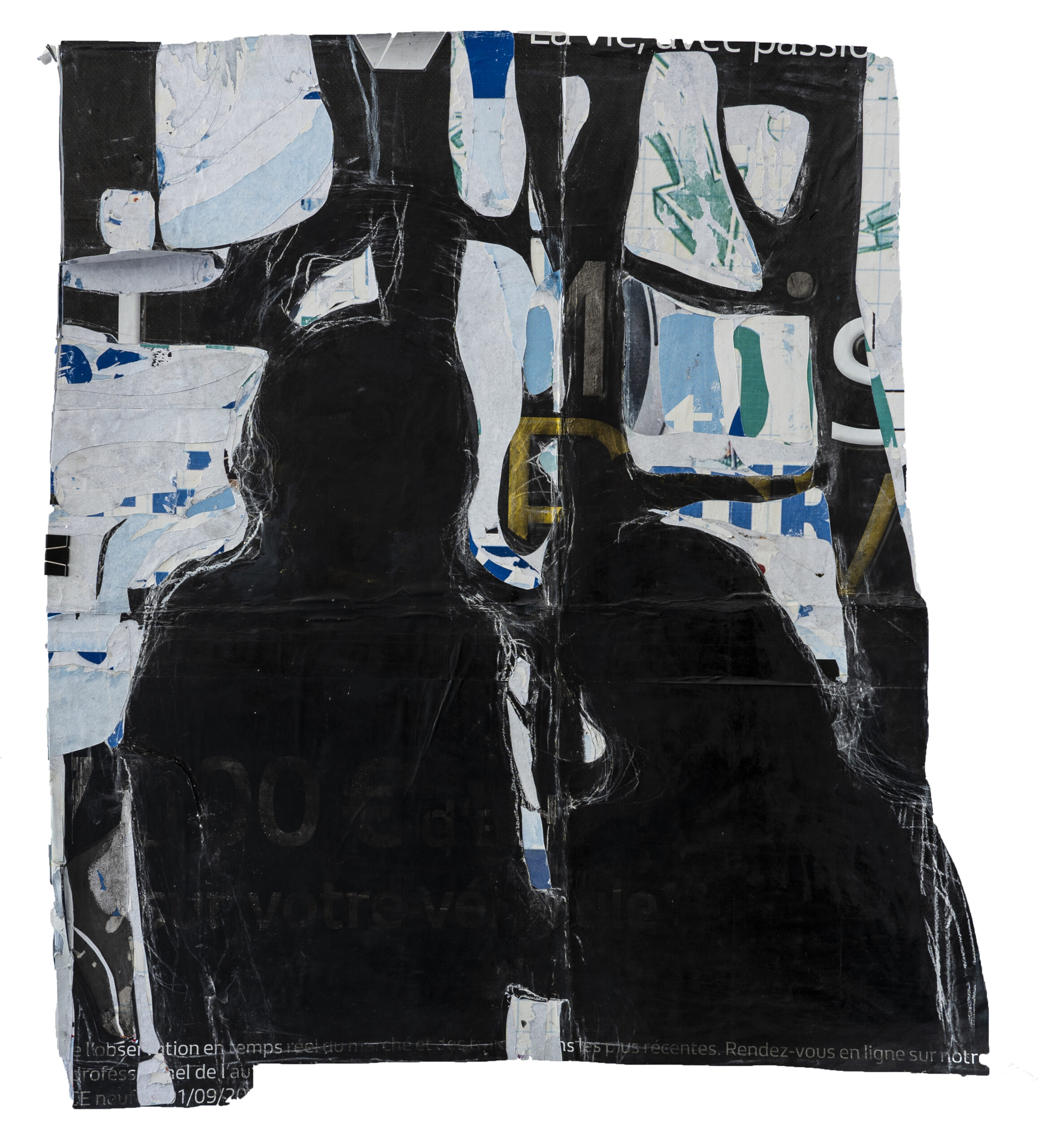 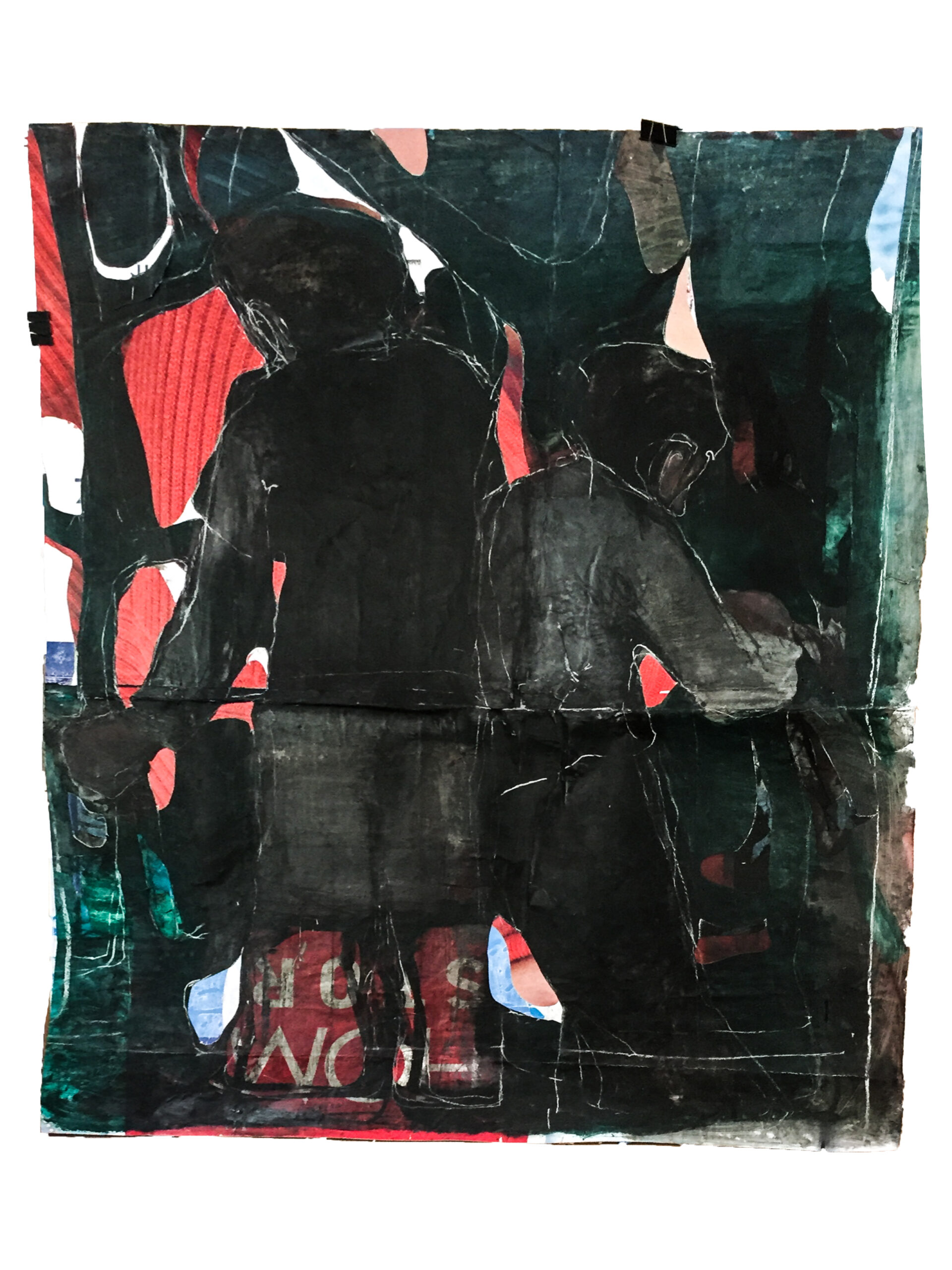 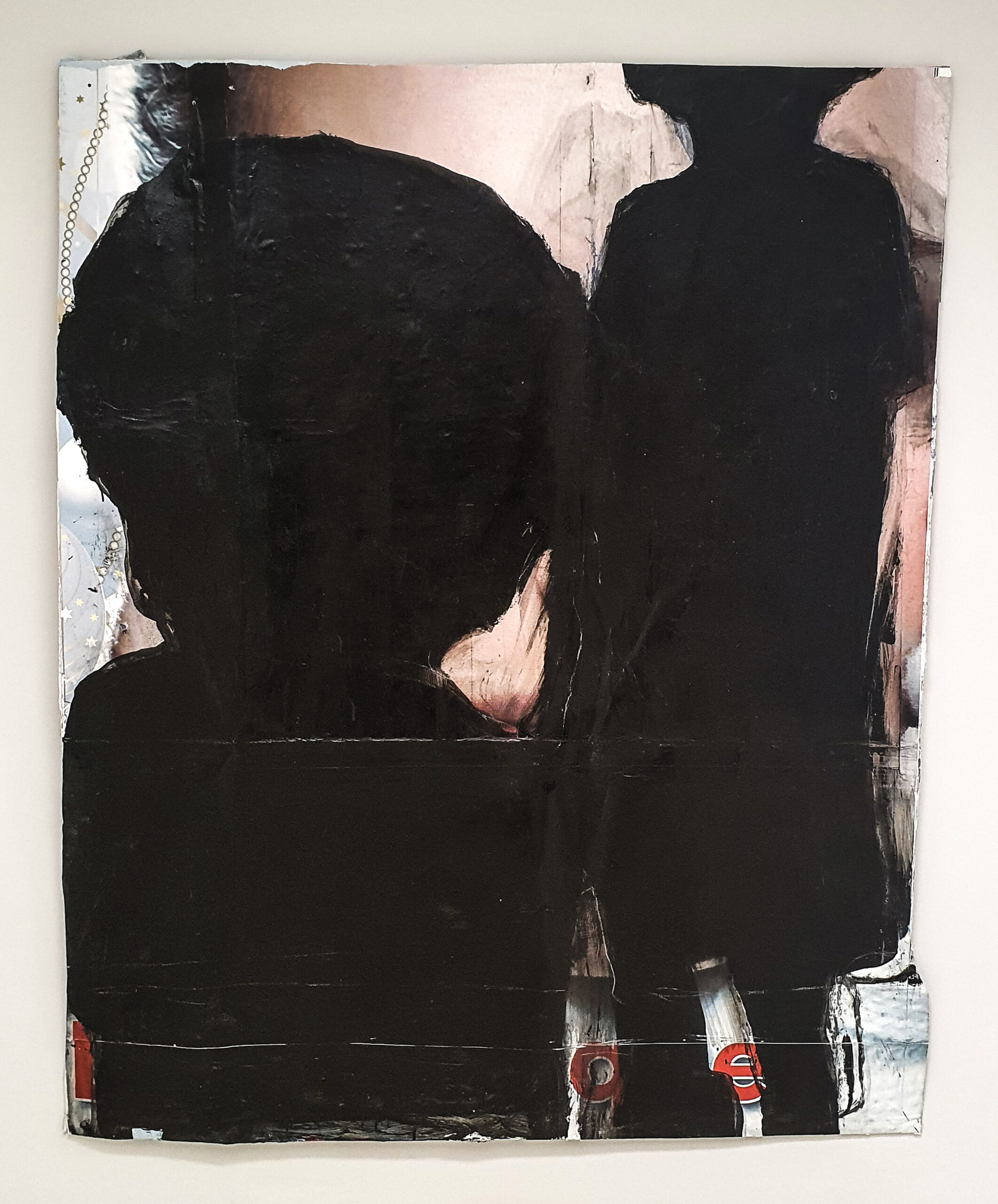 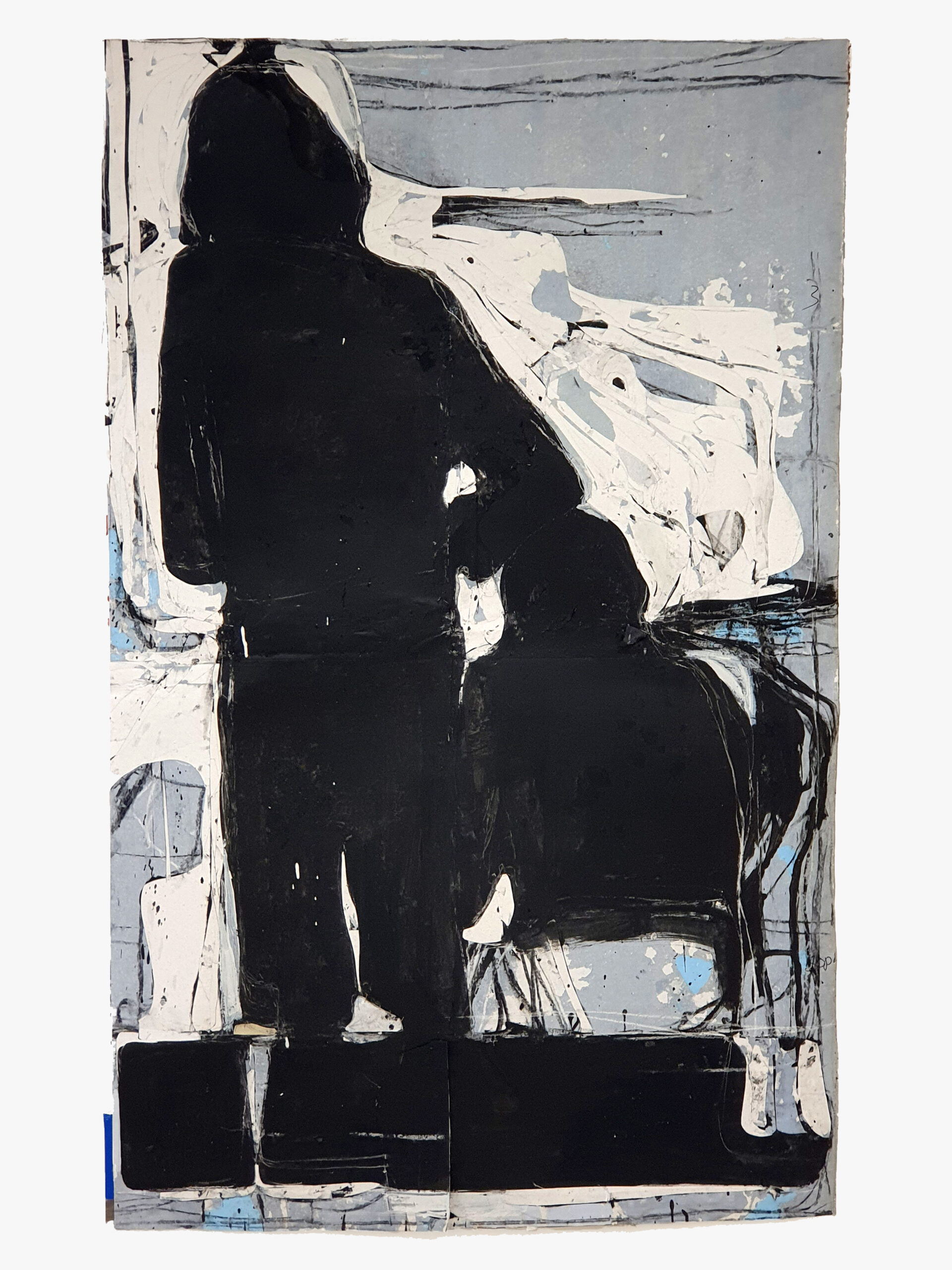 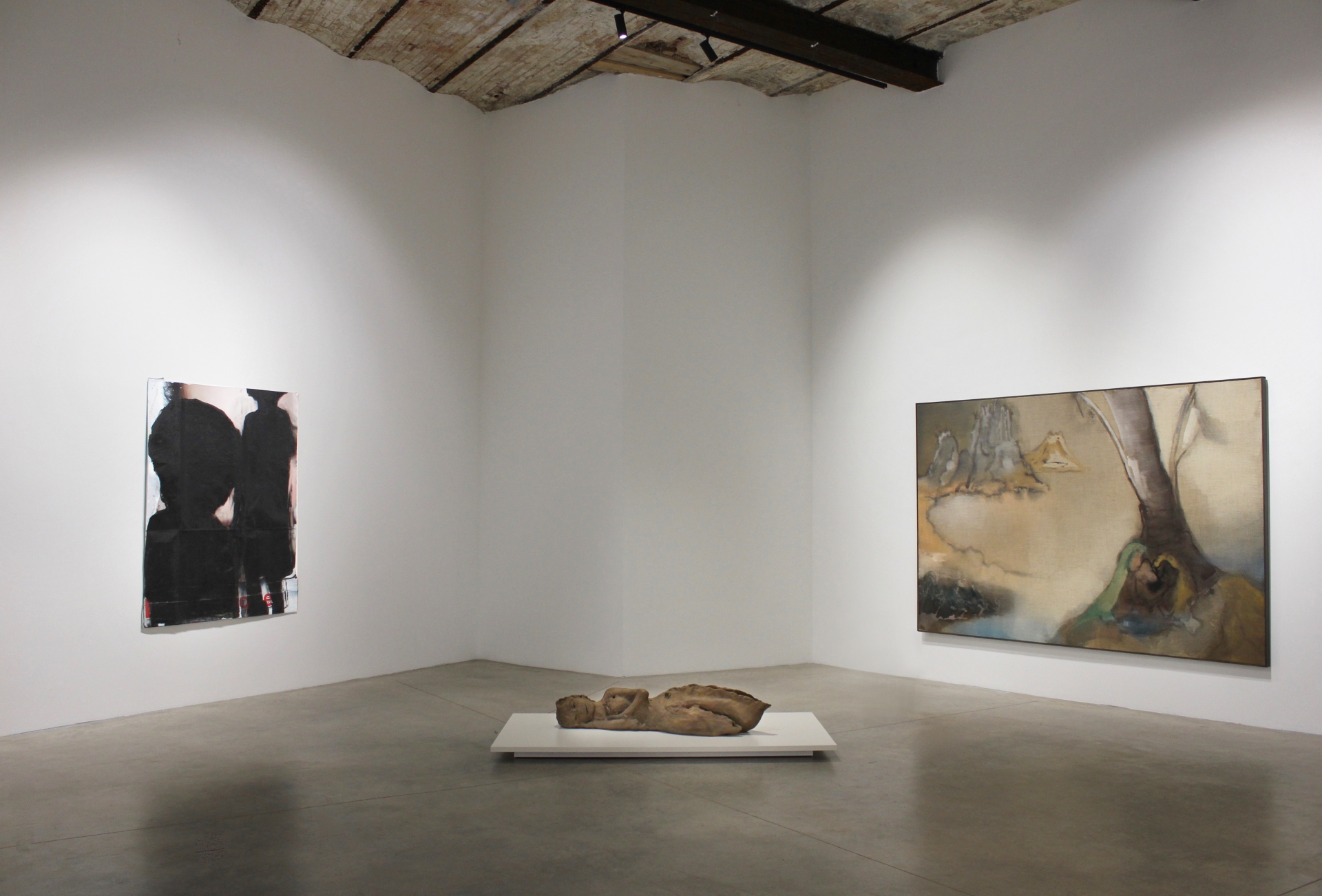 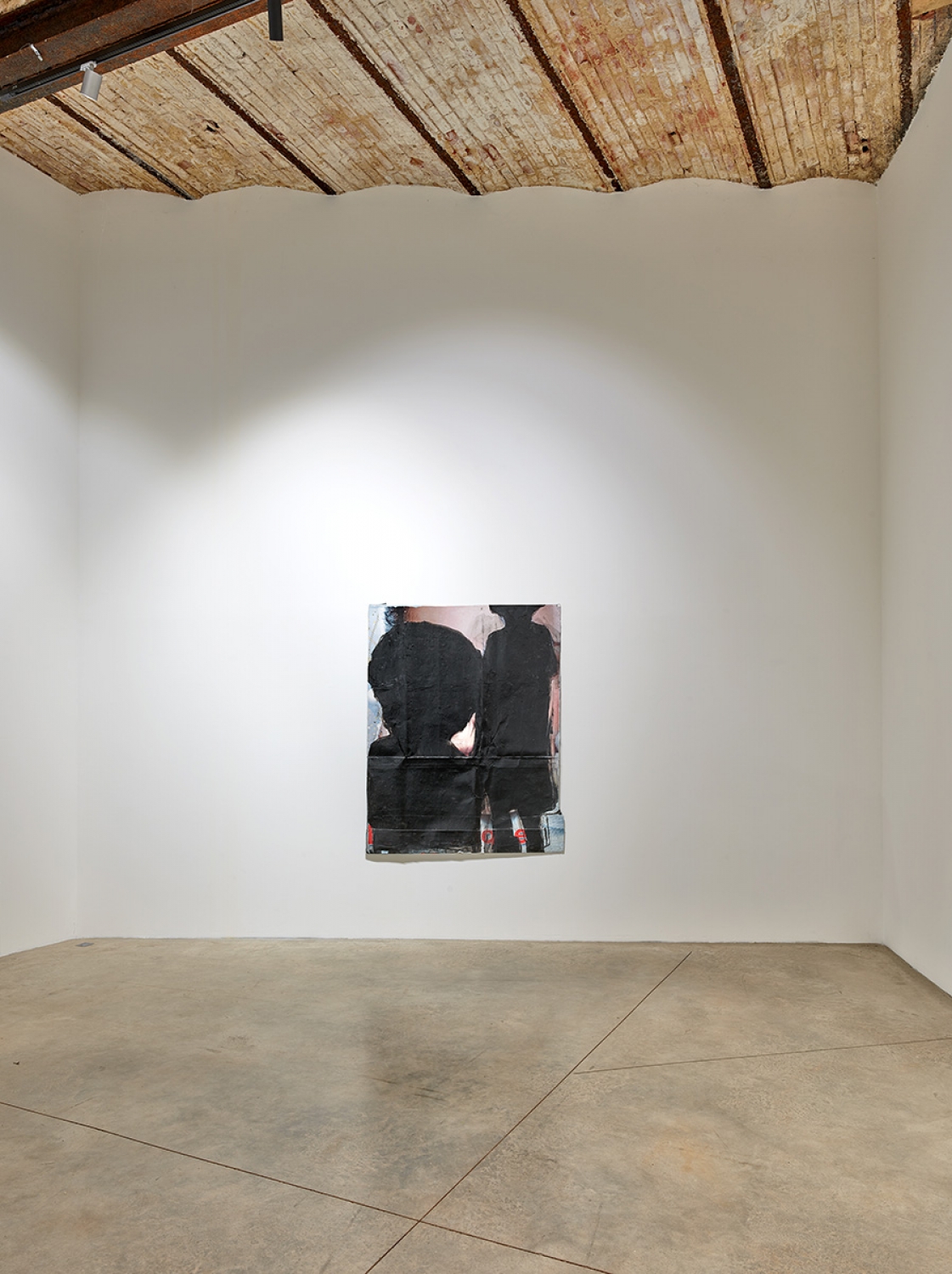 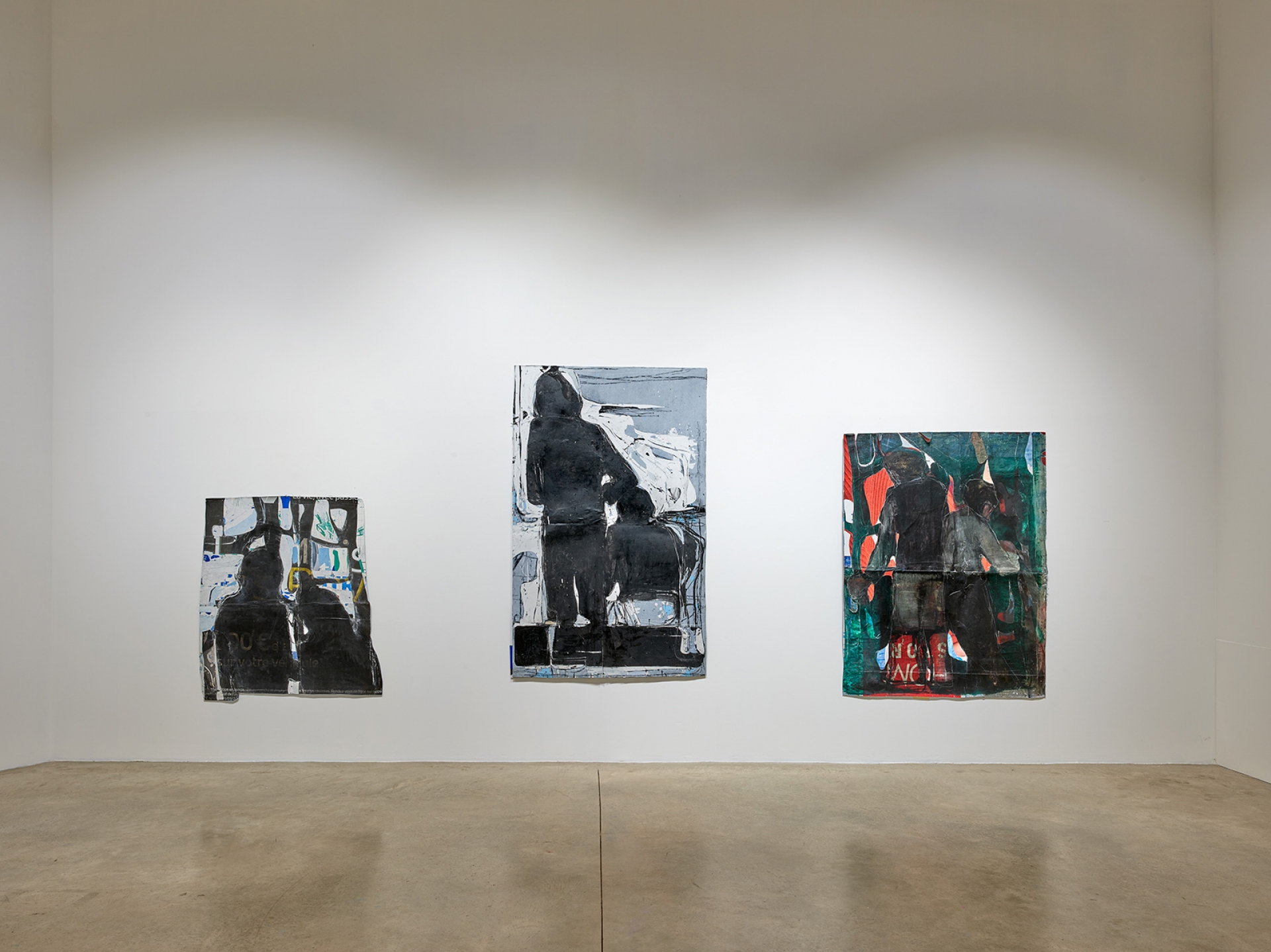 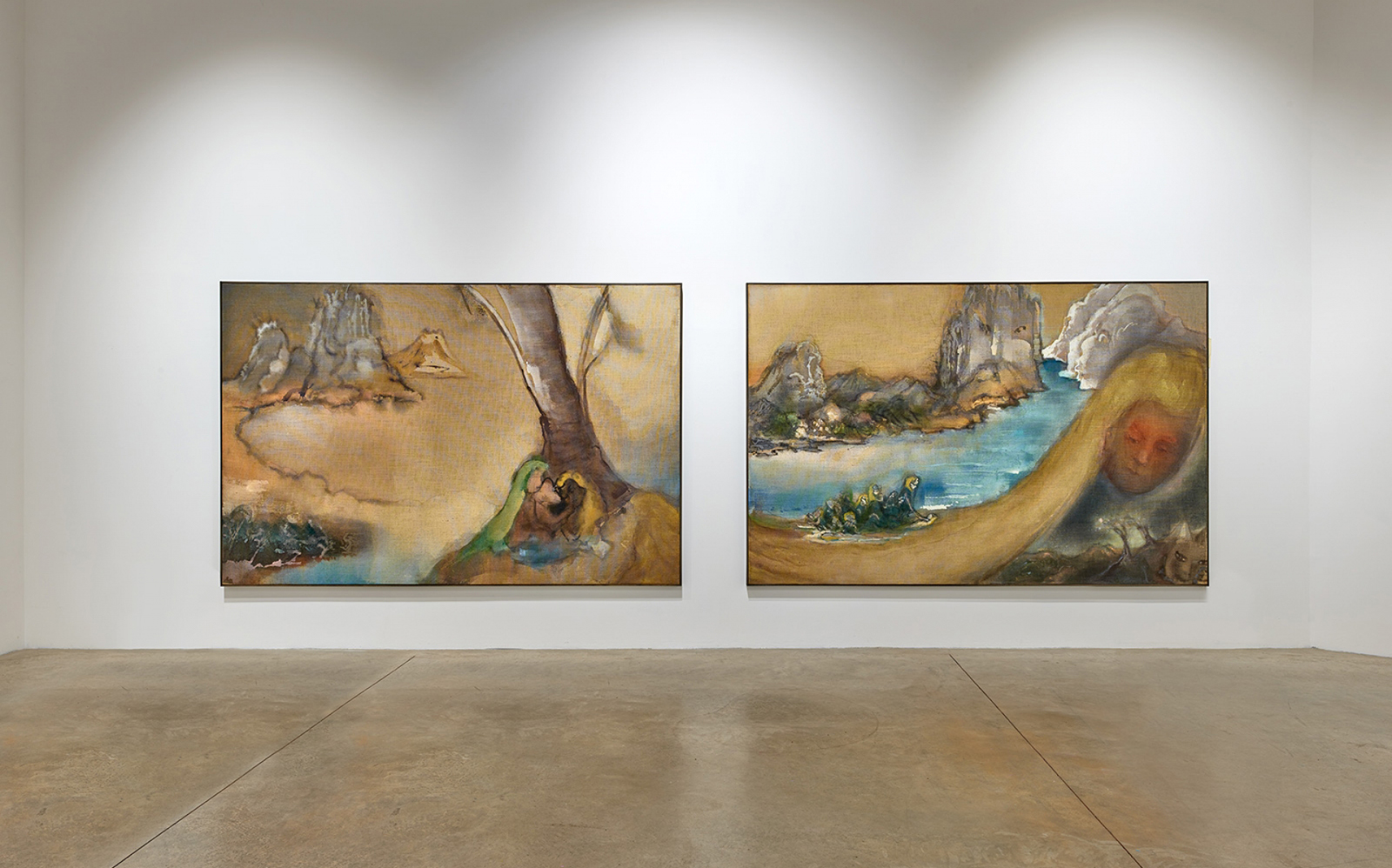 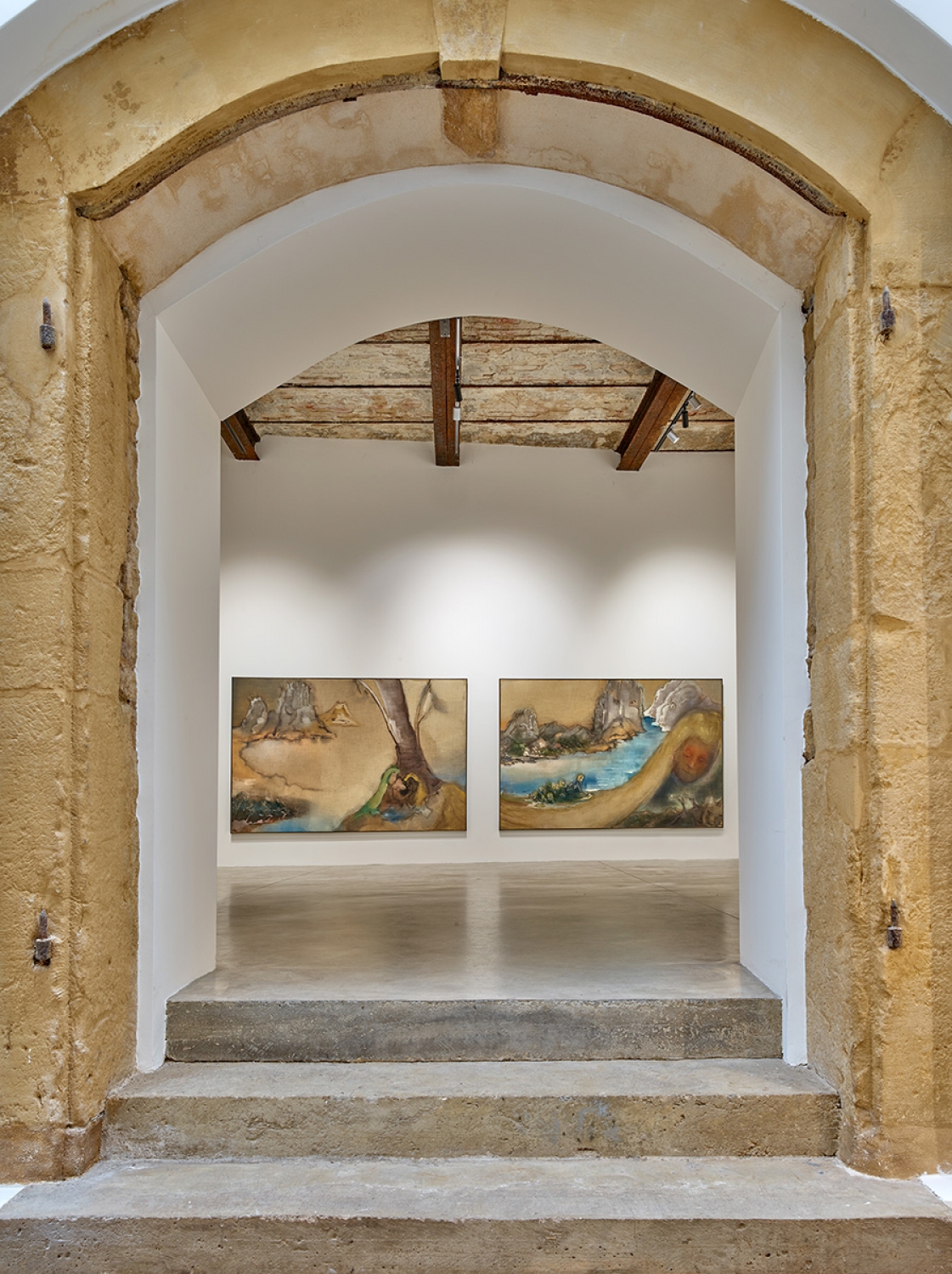 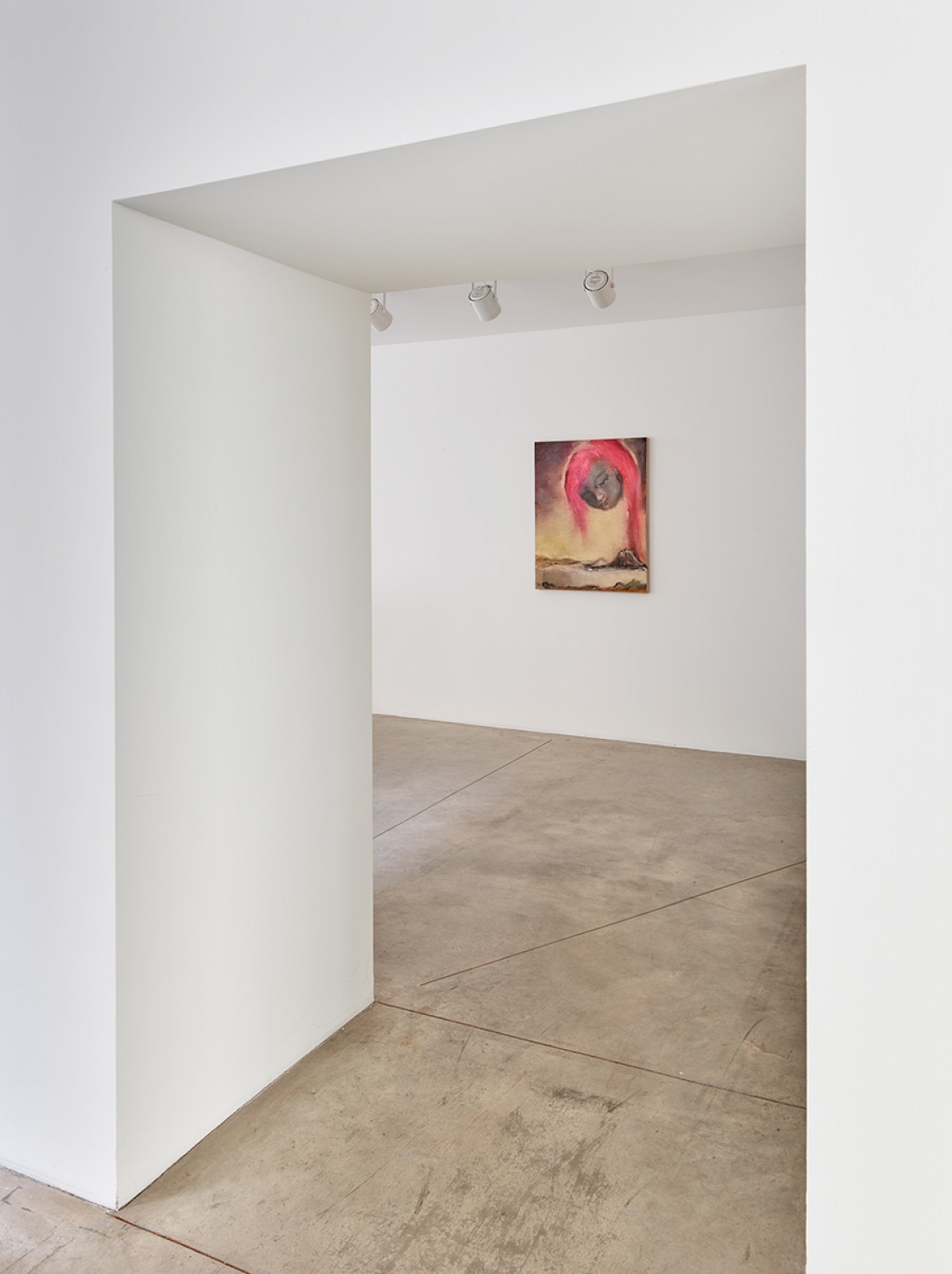 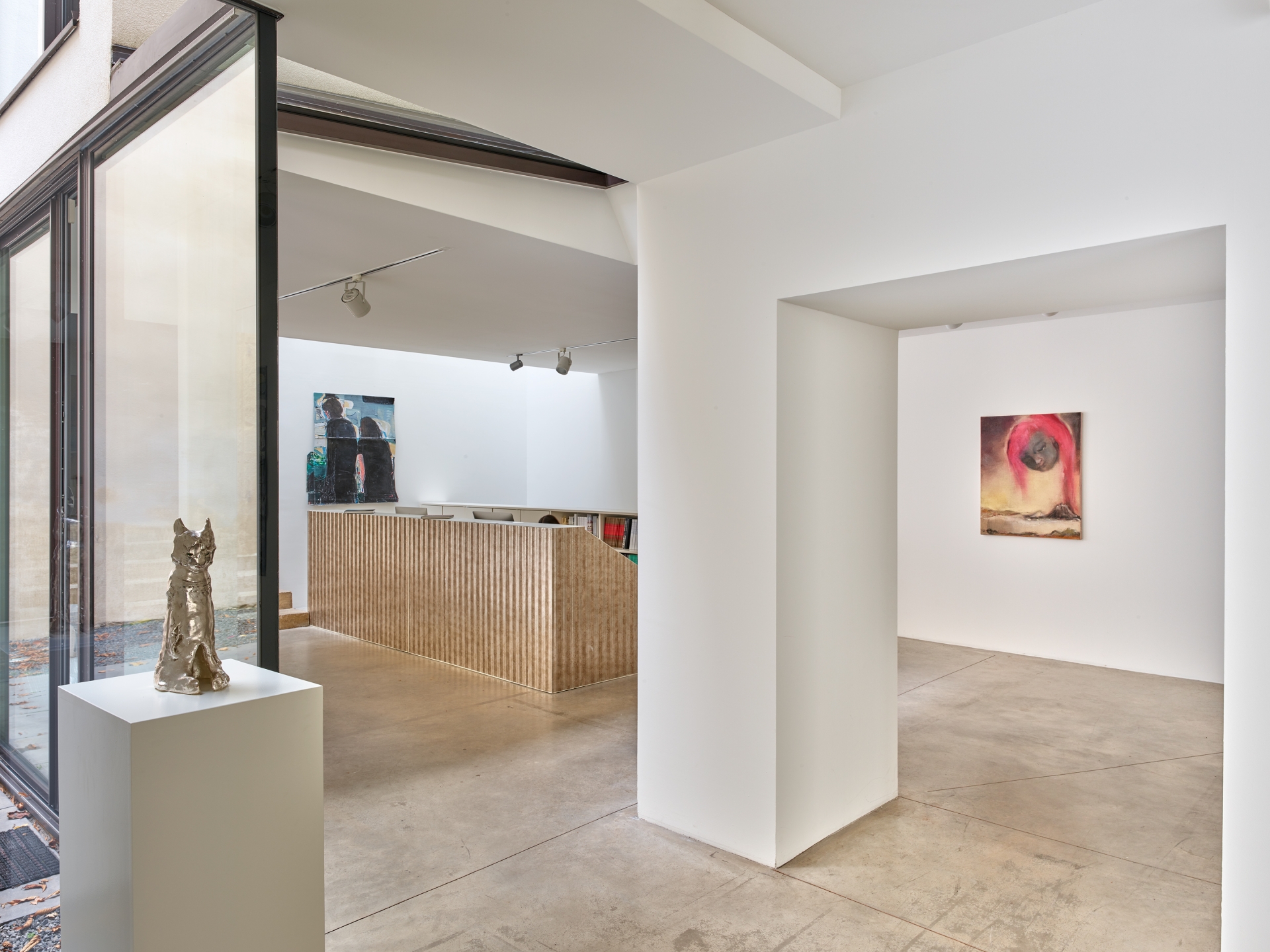 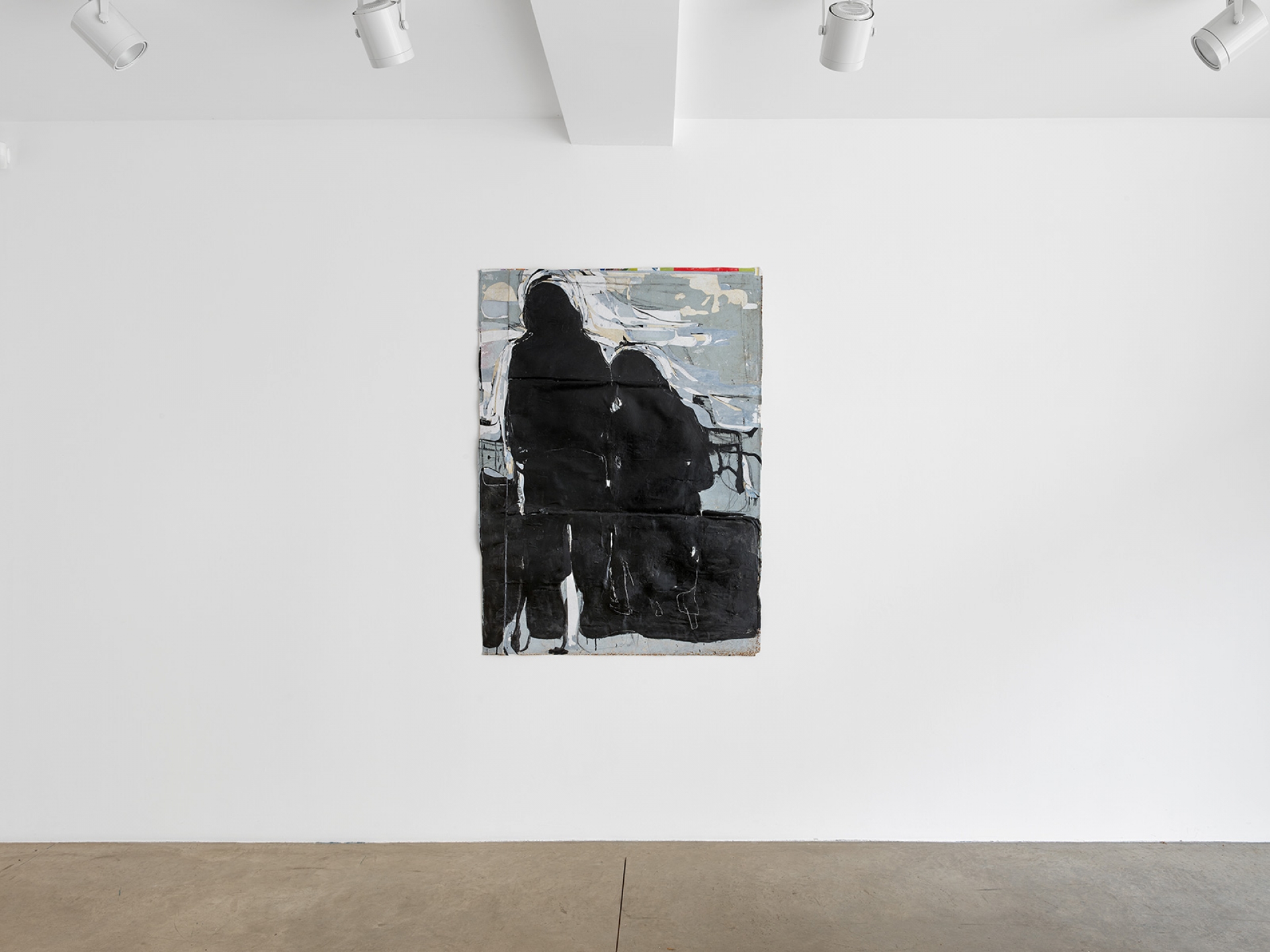 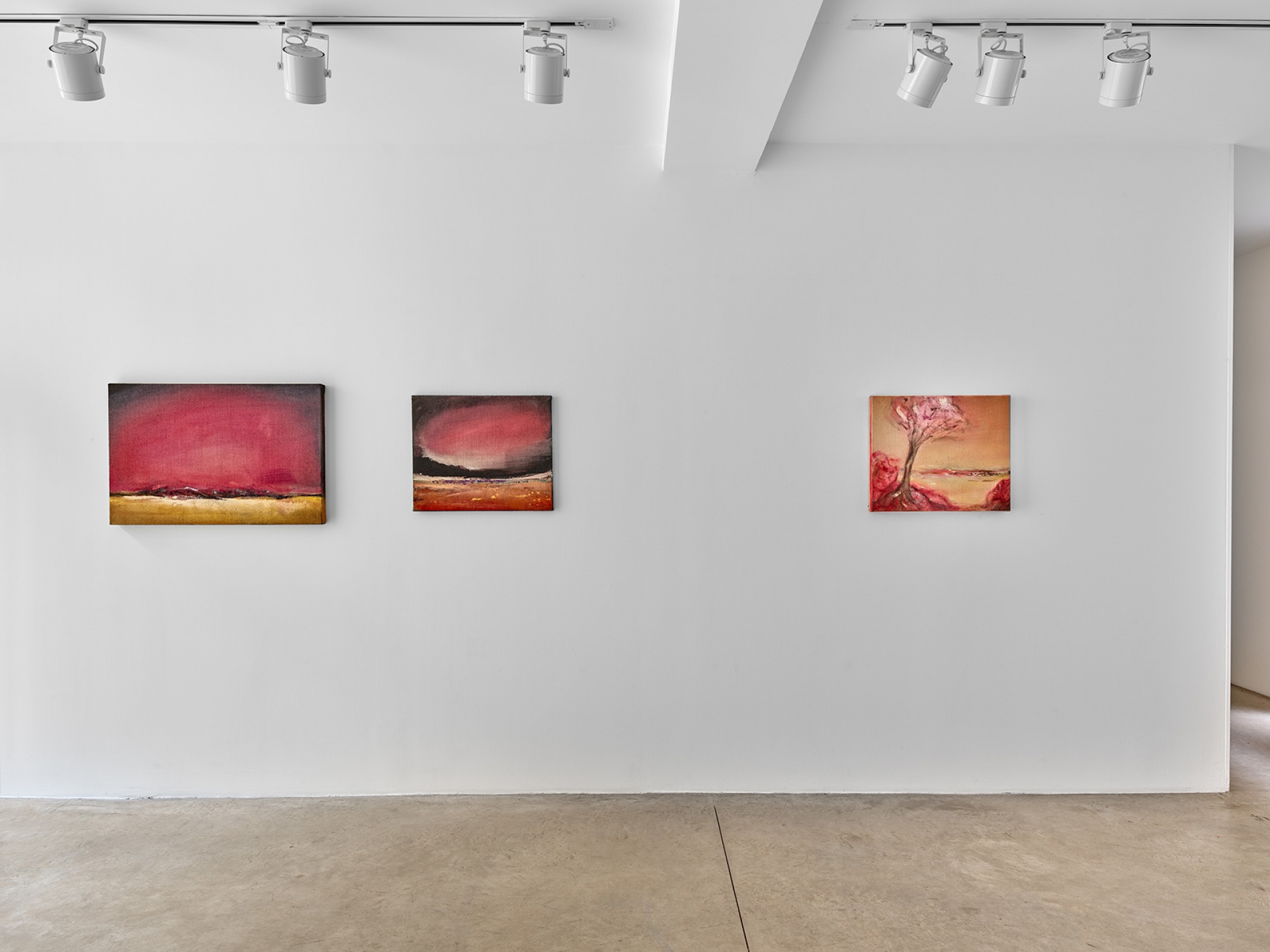 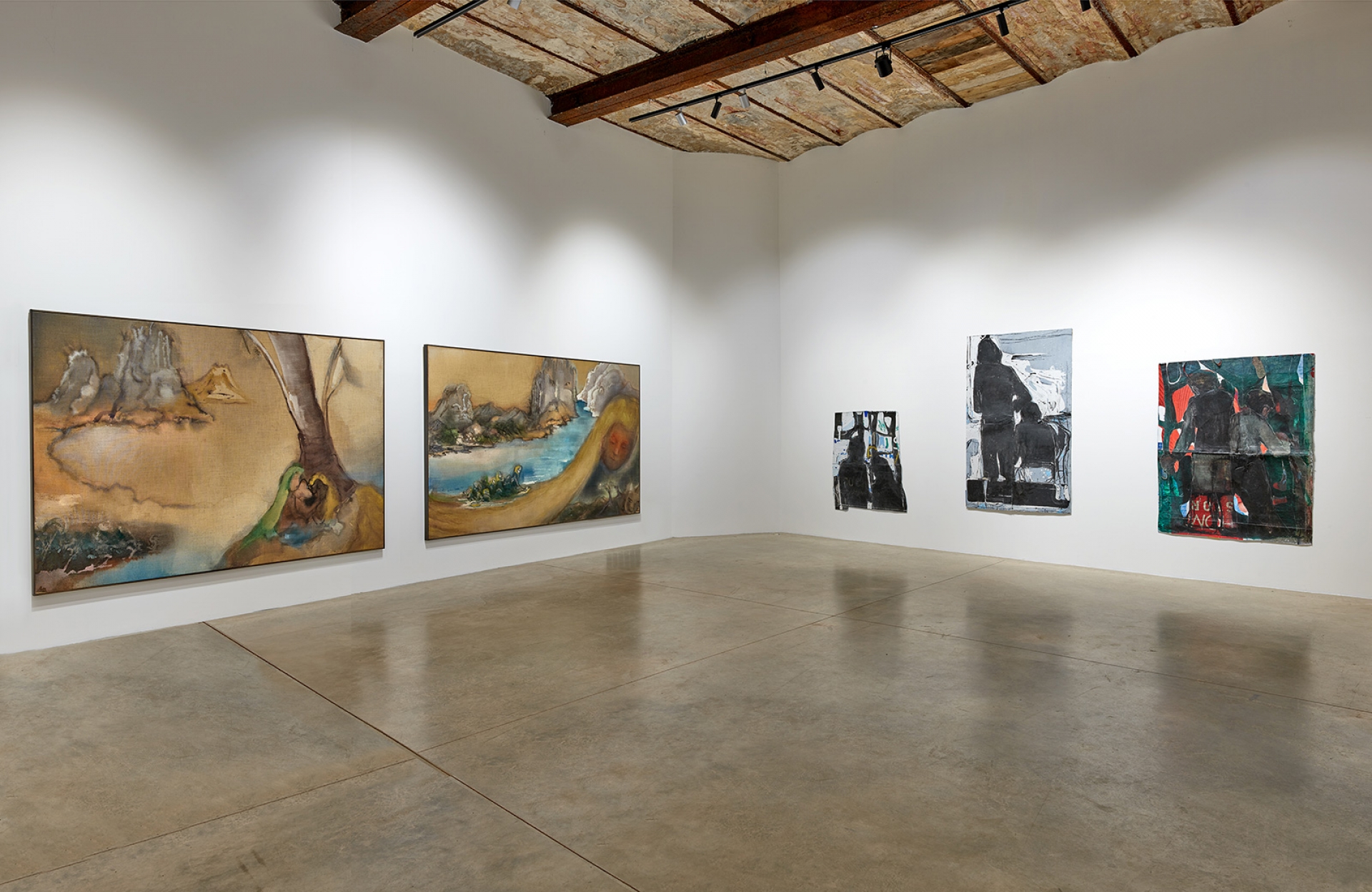 In the South of France, Jean-Charles Blais continued his exploration of bold abstracted forms, turning progressively into figures, painted on thick layers of large billboard posters. The densely layered posters convey a sense of timelessness, playing with the viewer’s subconscious, on emotional, visual, and physical levels.

The comparison of works from different periods, which simultaneously work on different levels, is a common practice in the work of Jean Charles Blais. His work is informed by the diverse application of the medium, by using the couture as drawing or painting. With the help of digital media, billboards and other graphics emerge.

The new works shown at the gallery fit into his figurative repertoire, whose fascination lies in the various layers of paper. It seems that the memory of forgotten forms, which were present in early works from the 80s, have been rediscovered. The polysemy arises through incessant metamorphoses, which play with the staging of the body and ambiguity. Forms are created, which arise from the concurrence of depth and surface – modern, unique, consistent and elusive.

One looks for the empty forms, which emerge as memories of an absent body only to immediately disappear again.

Jean-Charles Blais was born in1956 in Nantes. He studied at the University of Beaux-Arts in Rennes, France from 1974 to 1979. He lives and works between Paris and Vence in South of France.

Jean Charles Blais’ body of work abounds with art historical references, touching on the work of artists such as Henri Matisse, Kasimir Malevitsch and Philip Guston. He uses this as the basis to develop his own, distinctive artistic lexicon to portray the human body, which in his newest works in particular is emotionally deeply compelling.

Jean-Charles Blais designed different projects in the urban space, such as the posters frieze in the station « Assemblée Nationale » in the Parisian subway (2013).

The artist’s works can be found in several major collections, including the collections of the Museum of Modern Art New York, the Museum Moderner Kunst Stiftung Ludwig Wien, the Carré d’Art Nîmes, the CAPC Bordeaux, the Stedelijk Museum Amsterdam, the Musée National Monaco and the Centre Pompidou Paris.

It is often said that Leiko Ikemura’s work is characterized by the encounter of two cultures: it references Western art history, but the themes and formal vocabulary also immerse the beholder in the Japanese tradition, which venerates asymmetry, incompleteness, and ambiguity. “Imagination is the strongest force in my work”, says the artist, and it is precisely this exercise of completing something with one’s imagination that enables the viewer to enter into a dialogue with the Western tradition, which is oriented towards limits, an avoidance of ambiguity, and symmetry. In her art, Ikemura attempts to elude rational control and to immerse herself and the beholder in sensual and emotional experience. The viewer seems to find himself in a kind of intermediate world, in horizontal landscapes with visually unlimited pictorial spaces, or in cosmic landscapes whose forms may be interpreted anthropomorphically – human creatures take on the shapes of animals, or trees or rocks metamorphose into human faces. The transitions are always fluid – in painting and sculpture, in landscape and in human portrayals.

“The larger paintings under the title Genesis are recent works that contemplate the origin of humans and all other living beings in nature. Utopia and admonitions are simultaneously present, while the motif of the large female figure transforms into forms in nature like mountains, rivers, and trees. The smaller paintings demonstrate a praxis of abstraction in painting that delves into the open horizon. They intimate the moments when painting is an act.

While the paintings are almost immaterial and able to hint toward other realities, my sculptures assert more physical presence. Collectively, they could be seen as a hybrid, like the silver cat between humans and animals. The lying female figure represents the circle of life, which unfolds the power of life beyond mortality.”

Leiko Ikemura was born in Tsu, Japan. She studied Spanish literature at the University of Foreign Languages in Osaka and emigrated to Spain in 1972 to intensify her studies in Salamanca and Granada. From 1973 until 1978 she pursued painting studies at the Academy in Seville. After moving to Switzerland Ikemura left a lasting impression on the Zurich art scene of the Eighties. In 1983, the Bonner Kunstverein dedicated her works a major exhibition. Numerous exhibitions and retrospectives at renowned international institutions followed, the most notable of which being recent shows at Staatliche Kunsthalle, Karlsruhe (2012), Vangi Sculpture Garden Museum, Shizuoka, Japan (2014), Museum of East Asian Art, Cologne, (2015), Haus am Waldsee, Berlin (2016) and KunstMuseum Basel, (2019).

In 2021, her work will be exhibited at the Sainsbury Art Center, UK (Usagi in Wonderland) and at the Shugo Arts Gallery at Tokyo.

From 1991 to 2015 she taught at the Universität des Künste, Berlin (UdK, formerly HdK). Since 2014 she is a professor at the Joshibi University of Art and Design, Kanagawa, Japan. Leiko Ikemura lives and works in Berlin, Germany.