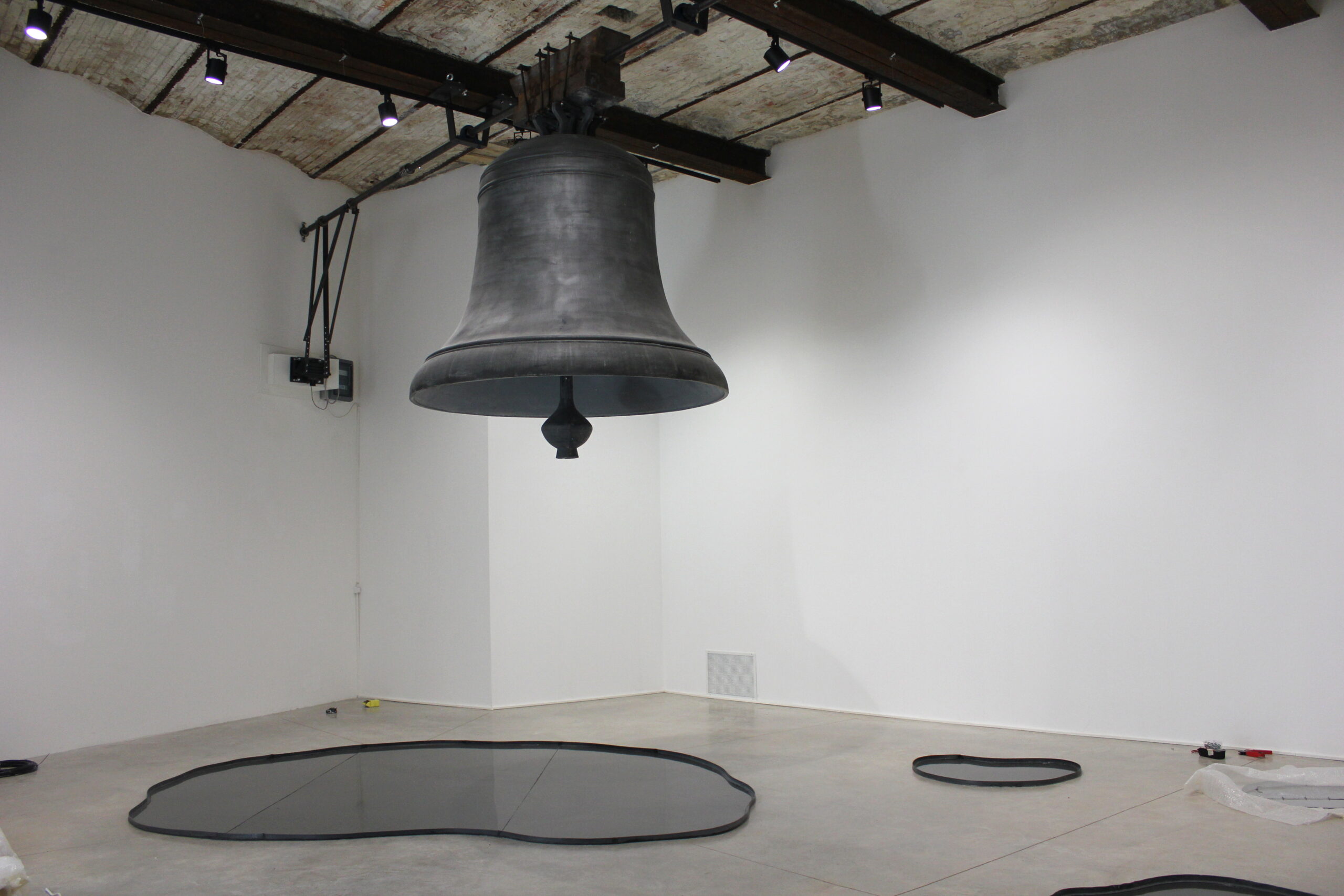 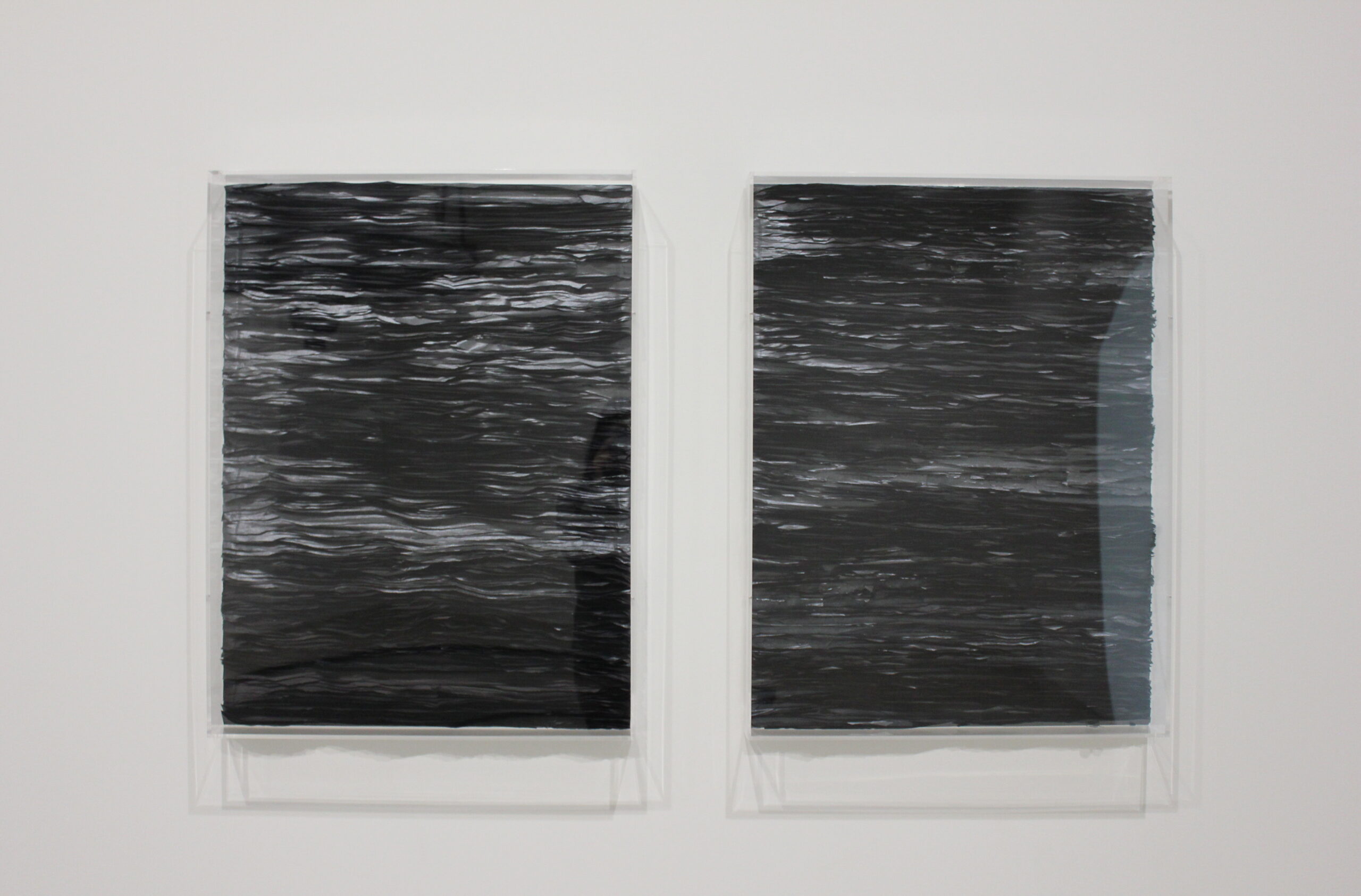 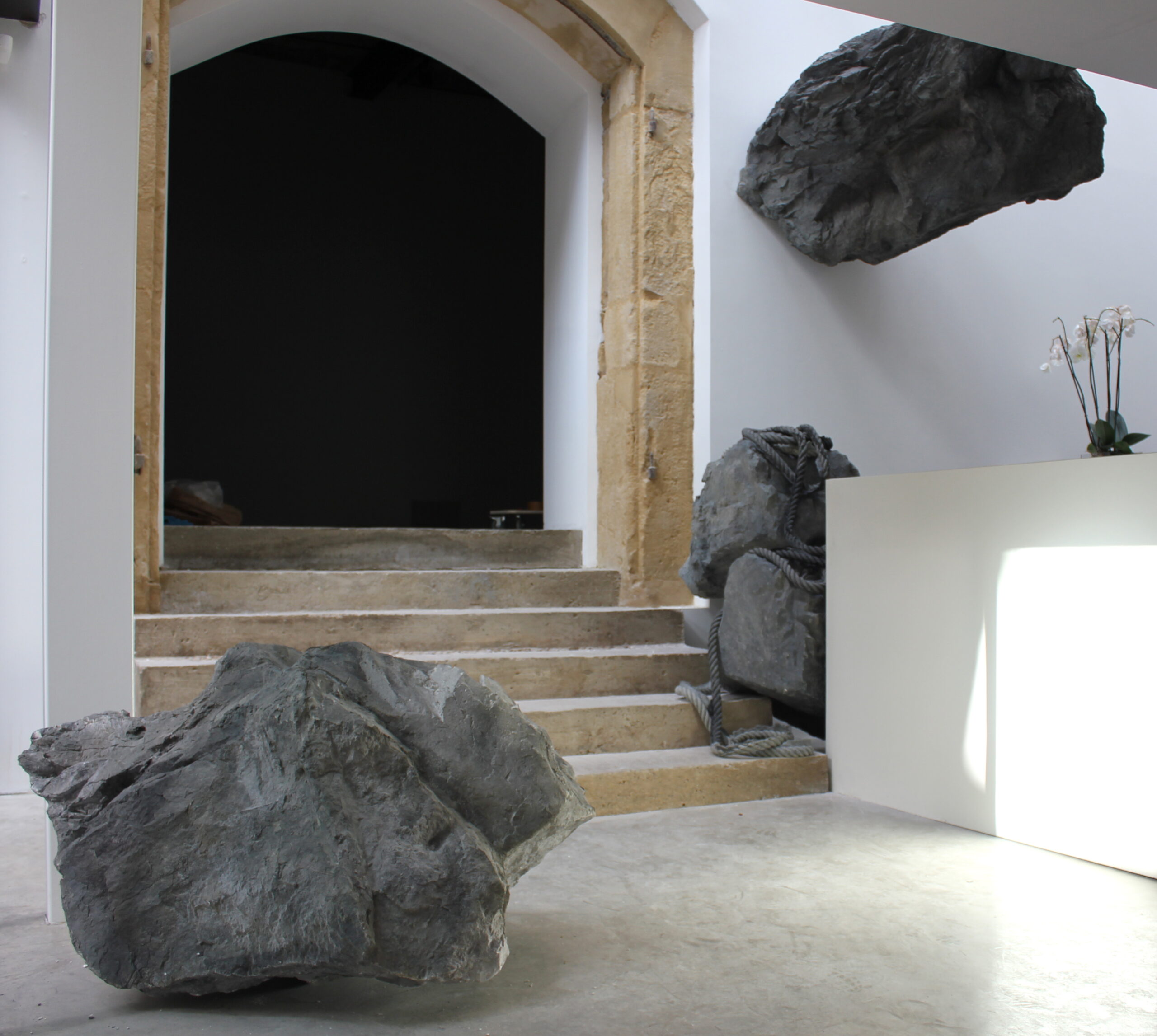 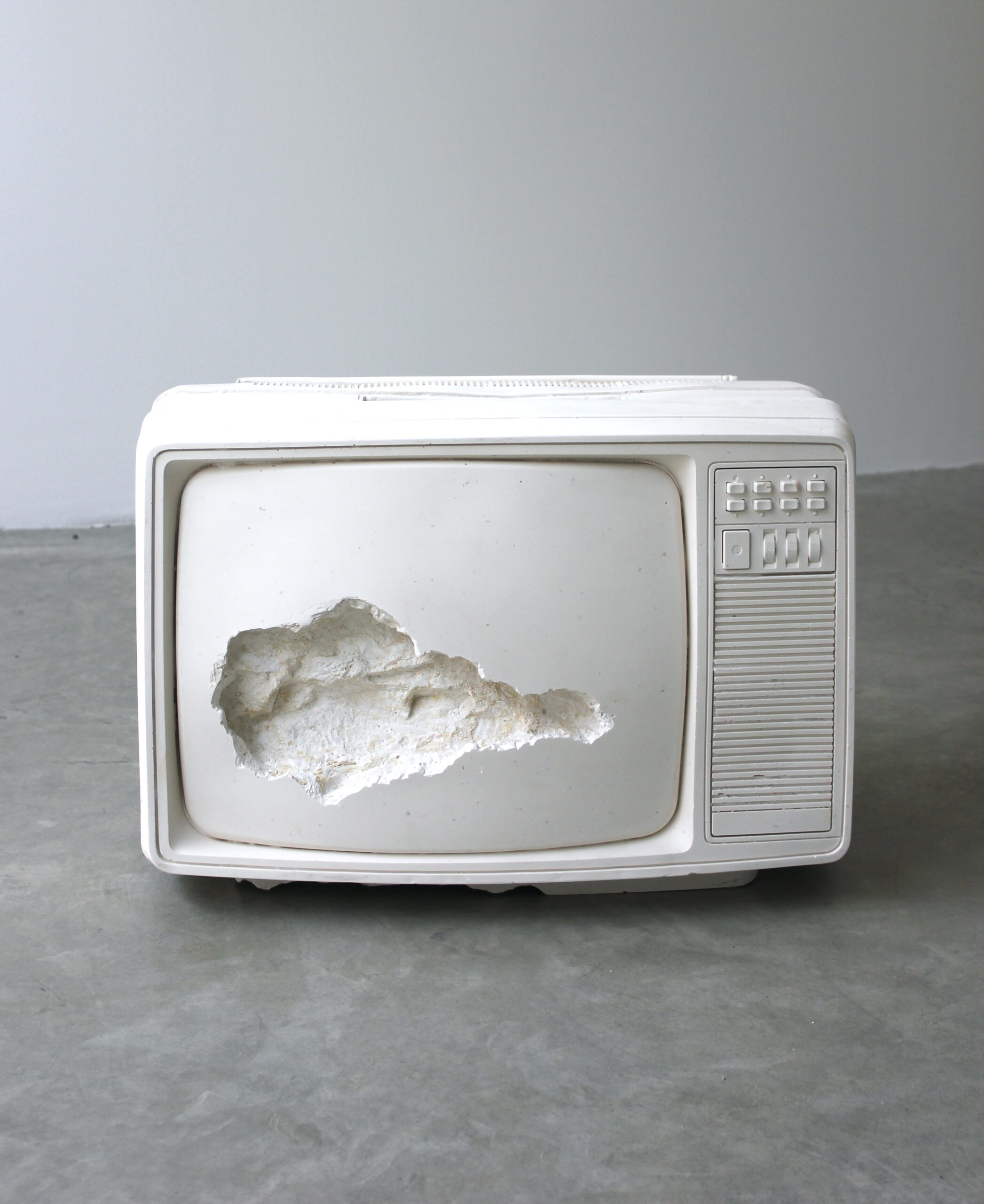 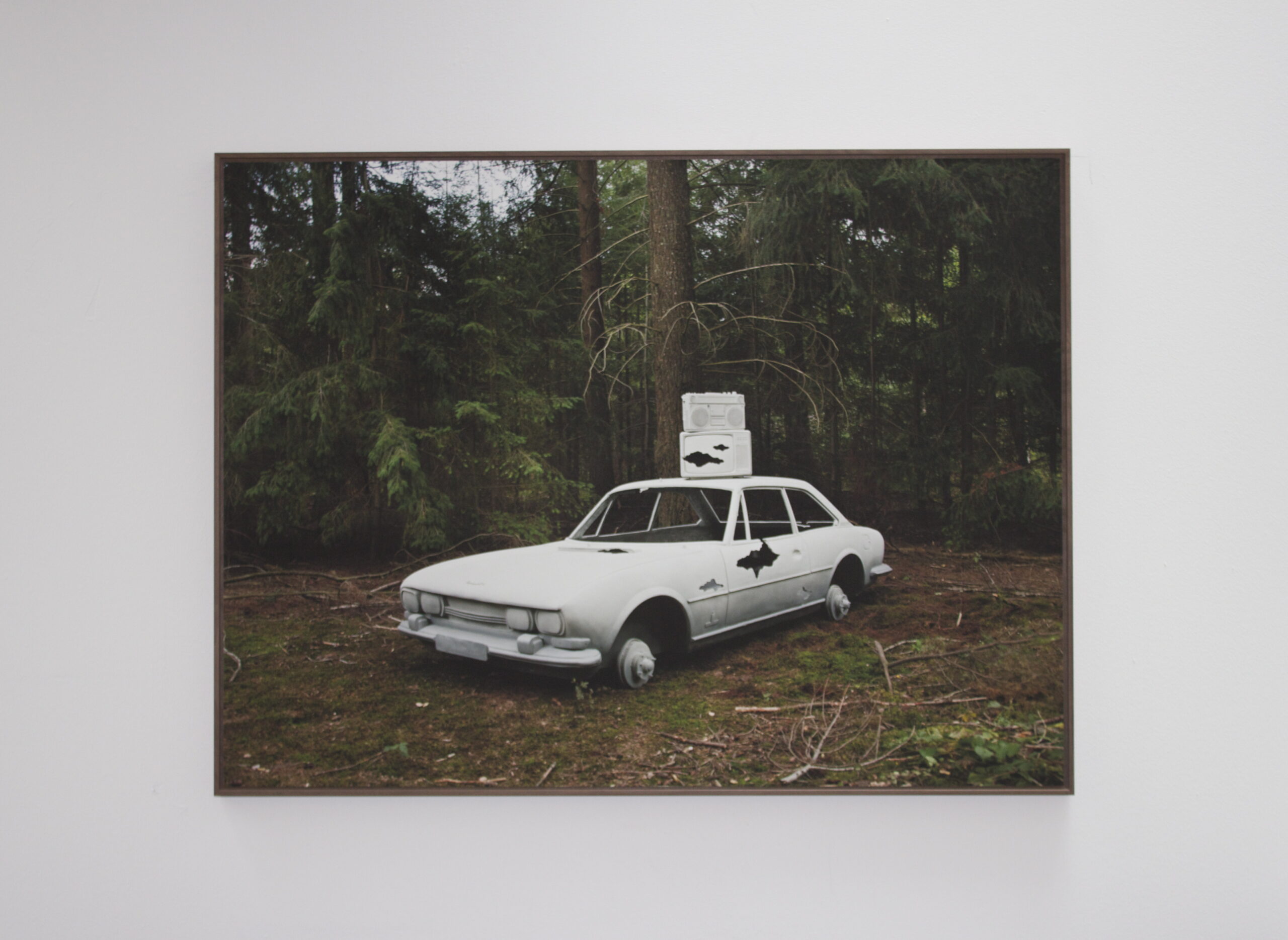 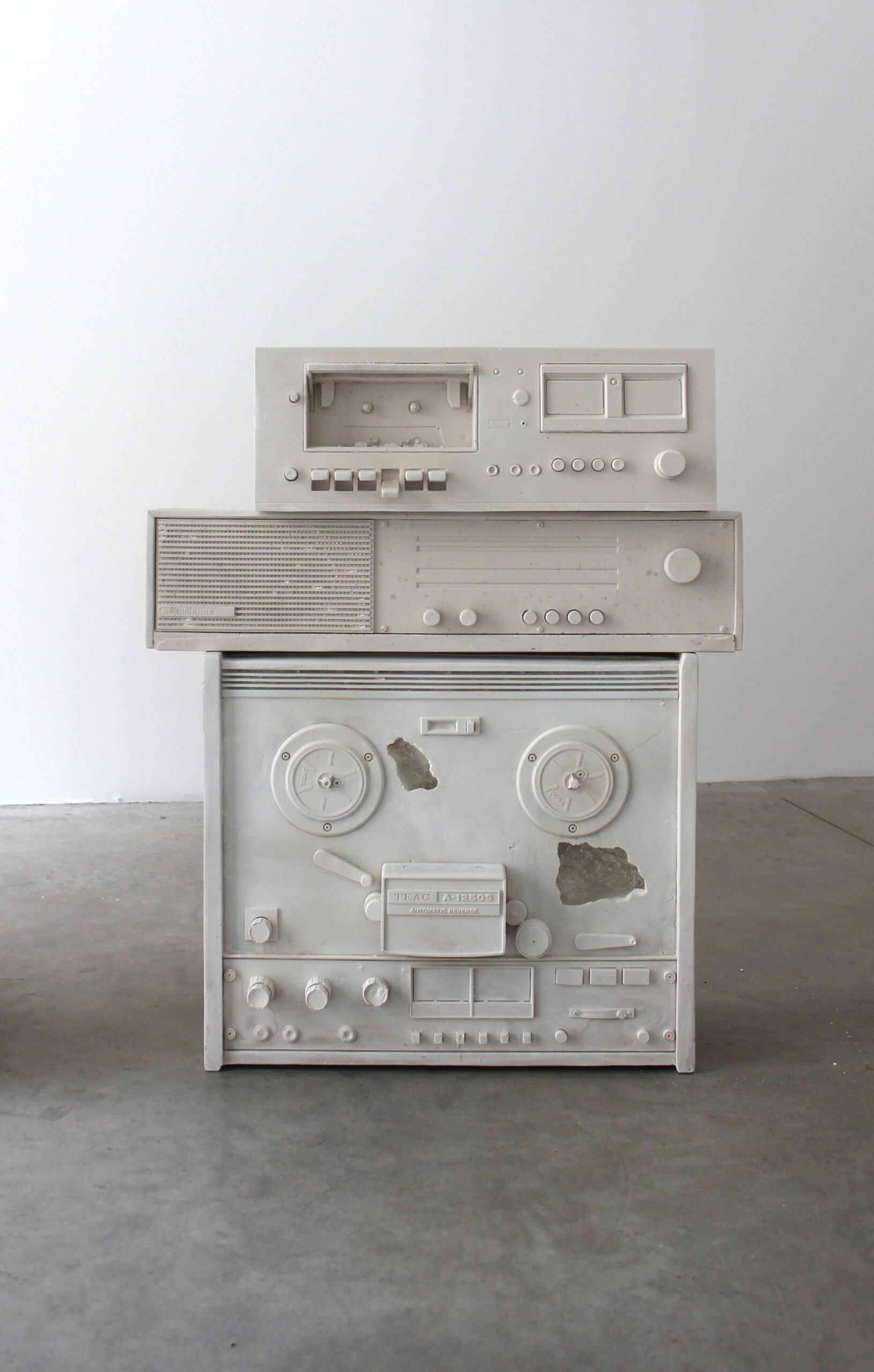 Moonlight solitude opens with a certain number of sculptures inspired by obsolete objects of the modernity. For a whole generation these objects have been the loyal companions of musical explorations and of the discovery of television broadcasts, these depreciated remains of our culture, symbols of a society of leisure, contributed largely to the democratization and the appropriation of cultural goods in an unprecedented scale. Inspired by the drawings of Giovanni Battista Piranesi, Martine Feipel & Jean Bechameil manage to sublime this civilization and its flickering ideology and add to their artworks a dramatic and romantic dimension that reflects their idea of the dignity and magnificence of our modern society.

The back room confronts us with a contemplative and introspective situation that questions our spatial and temporal certainties. The present time of the exhibition is punctuated by a monumental bell, that swings but without giving out a sound. The underside of the bell’s skirt—with its swinging clapper—haunts the spooky reflections in a puddle of dark stagnant water below. Like an imposing and solemn figure, the bell takes us into the night.

In their work Martine Feipel & Jean Bechameil depict spaces as well as ideas in crisis or in transformation and the inevitable decline of all things. They always start with existing spaces and open them up to new possible portion of space hidden inside them.

“Beyond its accessible sci-fi/baroque formatting, through its stylistic hybridization, the installation discusses space in a crisis with a questioning of our ability to annihilate and transform. As Lovecraft wrote, each space holds another in folded dimensions, double and asymmetric, invisible and unknown, larger in volume, richer in potential and of a true nature waiting to manifest itself. It is in the clever layout of the first space that lies the passage to its entrance, half-opening the hidden door leading there. This is the way that Feipel and Bechameil symbolically designed each of their projects. Through this process the artist couple deconstructs an organized space, disorienting the visitor during its perambulation—time enough to rotate in the structural container.”

Frédéric Bouglé, When everything collapses around you, 2014

Martine Feipel & Jean Bechameil has been working together since 2008 in Luxembourg. Born in 1975 in Luxembourg (L), Martine Feipel obtained a Master’s degree in Fine Arts in 2002 at Central St. Martins College of Art & Design in London (GB). Born in 1964 in Paris (F), Jean Bechameil works since 1990 as an independent sculptor. He worked on numerous sets for plays and films and helped to produce on several films from Lars von Trier.

They represend the Luxembourgish Pavilion in 2011 at the 54th Venice Biennale and participated the same year to the Nuit Blanche in 2011 in Metz (F). In 2012 they won the award of the residency of La Cité Internationale des Art in Paris. They held group shows at the Triennial of contemporary art by the sea (B) in 2012, at the Kunstmuseum Bonn (D) and for the inauguration of the Pavillon Vendôme in Clichy (F) in 2013. More recently in 2014, they held a solo show at the Pavillon de l’Arsenal in Paris, participated in a group exhibition at La Kunsthalle in Mulhouse (F), showed the installation Many Dreams at Park Draï Eechelen next to the MUDAM in Luxembourg and were part of their second Nuit Blanche in Paris. They actually are part of the Lustwarande ’15 in Tilburg (NL). The duo was selected to create the 2014 commission for l’Œuvre de la Grande-Duchesse Charlotte in Luxembourg and the new 2015 commission for the European School in Mamer (L). Martine Feipel & Jean Bechameil have also been chosen for the Public Art Experience – Residency 2016 in Belval (L).