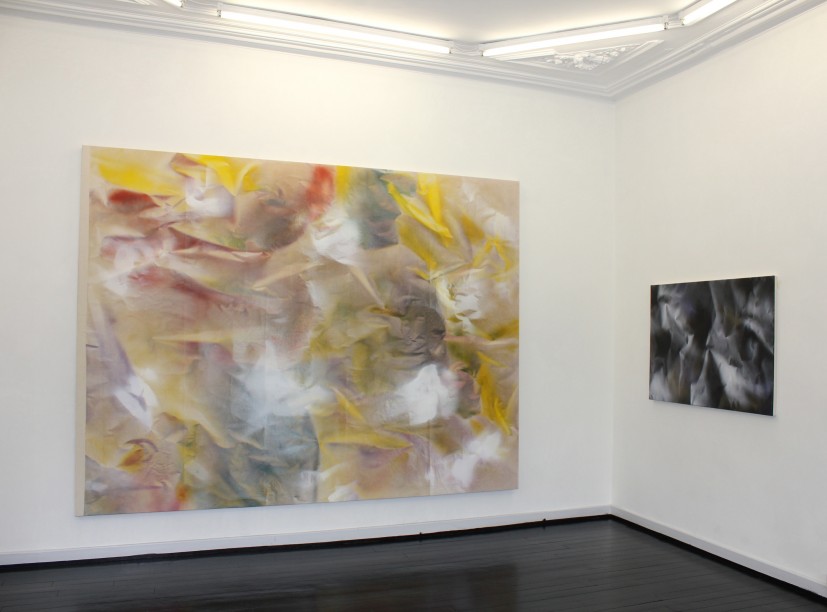 Zidoun-Bossuyt Gallery is pleased to present a solo exhibition with Thomas Zitzwitz.

Preview on Thursday September 17, 2014 from 6pm in presence of the artist. 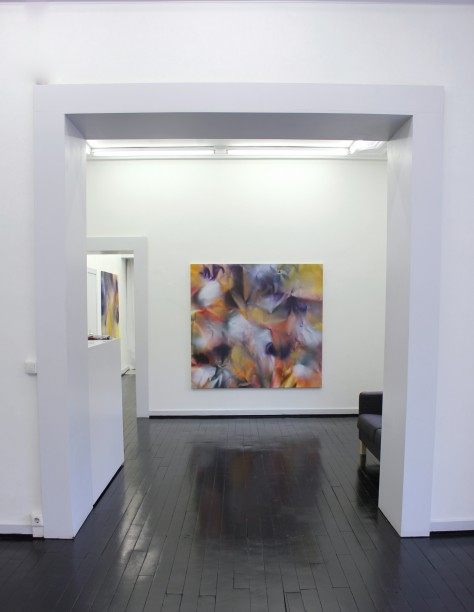 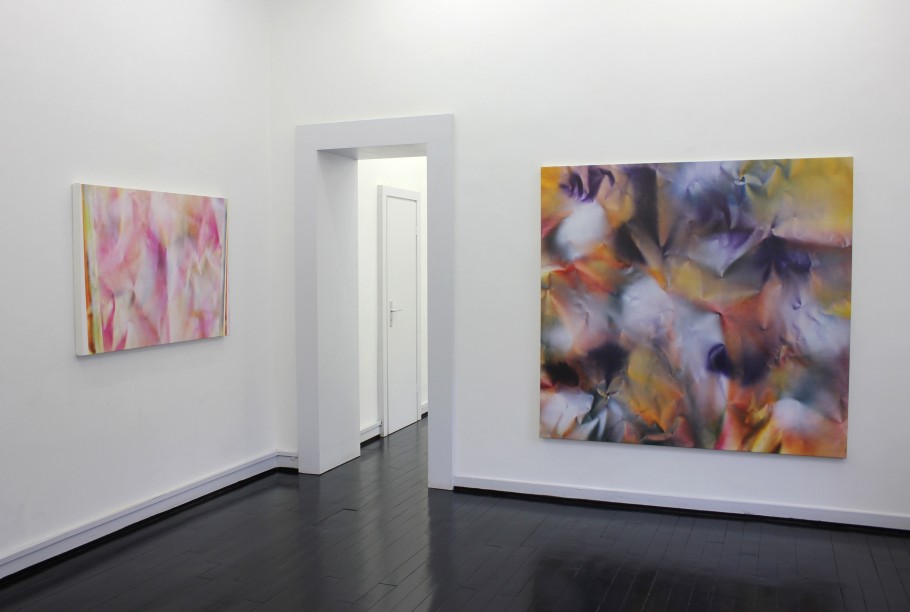 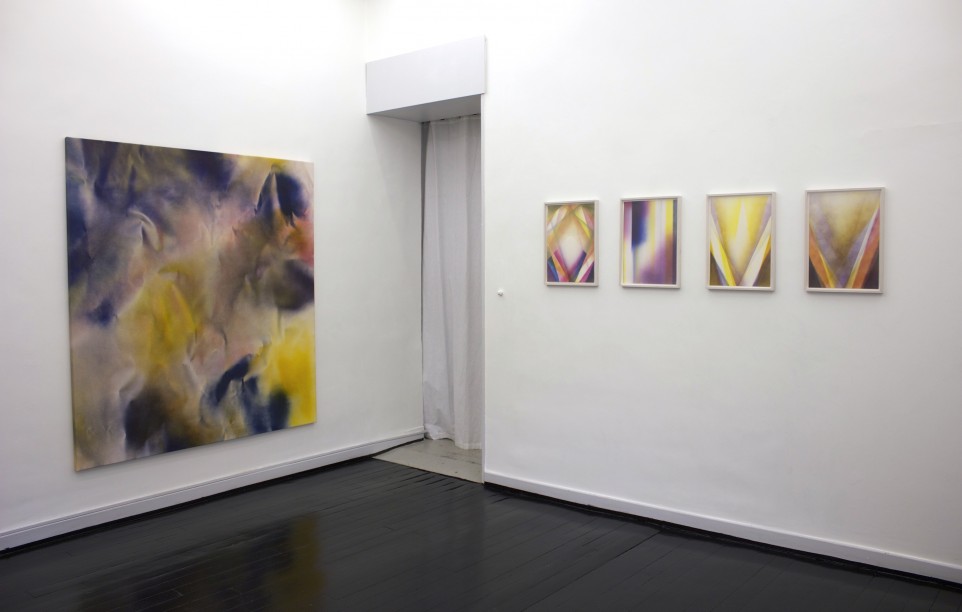 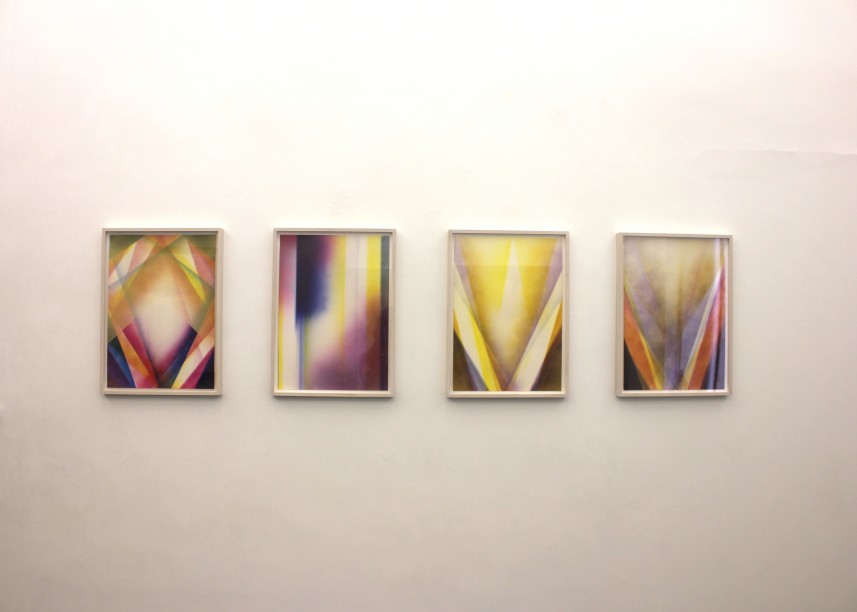 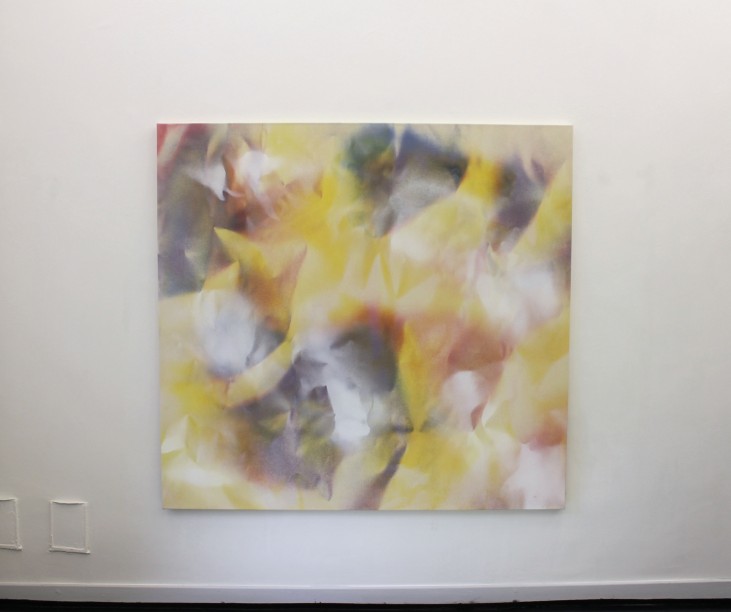 Hommage to the Spray Gun

»Everything folds in its own way, the rope and the stick as well as colors, which separate out in accordance with the concavity and convexity of the ray of light, and sounds which rise in pitch in accordance as the ›trembling parts are shorter and tighter‹.«

In music, the term «suite» is used to describe a sequence of compositions with a common programmatic theme. Under the exhibition title Suite for Spray Gun, Thomas Zitzwitz brings together a series of pictures created with a spray gun – a technical device usually used in industry to apply paint or lacquer to surfaces. The other common programmatic theme of the exhibits is that the colours were sprayed onto irregularly folded canvases which were only subsequently stretched over a frame.

The technique used in the Spray Paintings can be characterised as «planned coincidence» since the outcome of this partly controlled, partly random process only becomes visible when the canvas is flattened out on the frame. In this respect, it is not dissimilar to film material which after exposure has to be chemically developed. First of all, adhesive strips are used to mark out an area on the primed or non-primed canvas, which is spread on the floor. The artist then prepares the canvas, like Cage’s prepared piano as it were, by manipulating the fabric and occasionally placing objects beneath it to shape the fall of the folds. Prepared in this way, the area is treated with the spray gun – monochrome or polychrome – from all sides of the canvas. Sections on the reverse side of an edge, not covered by the spray remain blank, while colour is more concentrated in other parts, or opaque lakes of colour emerge in areas where the canvas becomes saturated. The association with spatial landscapes links some of the Spray Paintings to compositions of Abstract Expressionism, such as Helen Frankenthaler’s monumental Mountain and Sea (1952) – an effect that is counteracted in some paintings by adhesive strips on the edge of the image field, which disrupt the spatial effect and actually serve to emphasise the painting process.

It goes without saying that Thomas Zitzwitz is not the first artist in the history of painting to experiment with folding and creasing canvases. Discourse on painting after Modernism is evidently not about originality or authenticity, but about relational phenomena and productive deviations. Thus, the title Suite for Spray Gun can also be understood as a tribute to an historical representative of pliage, exiled Hungarian Simon Hantaï (1922–2008). As an art student, Hantaï left the realms of Socialist Realism in 1948 to settle in Paris, the then global capital of art. There, between 1969 and 1973, he produced his group of works Études (in music, the term used to describe exercises to improve technical skills): large-format all-over compositions on scrunched up canvases, their unpainted, bare sections suggesting a mesh of bamboo leaves against a monochrome background.

Not least of all, Thomas Zitzwitz’s Spray or Crumple Paintings mark a departure within his own artistic practice. In the second half of the 1990s, his work frequently focused on installations and multimedia compositions (sometimes using videos and smells). Towards the end of that decade, he concentrated to an increasing extent on painterly techniques using interference pigments, thickened with transparent acrylic gel, that were applied to the canvas with squeegees. The bright, colour- doused surfaces of these pictures, which are divided into two or three differently structured fields by hard horizontal edges, change their colourfulness depending on the perspective of the beholder and the light conditions. Their hybrid, atmospheric character – not only chromatically unstable but also varying in art form between picture and object – became even more apparent when they appeared in the artist’s book Moleskine orangée in 2007. Here, their juxtaposition with private Kodachrome photographs dating back to the artist’s childhood in the south of France also made the radiant paintings readable as abstract souvenir pictures. When Thomas Zitzwitz started working on his first Spray Paintings shortly after, in early 2008, this was also a conscious turn away from the «glossy, thicker surface» of painting with interference pigments towards a more «formal and less associative» effect, as he referred to it in an exchange of e-mails with American artist David Reed.

The association with film mentioned in the beginning is significant in another respect to the Spray Paintings, whose visual appearance only «develops» after the canvas is smoothed out on the frame. One of their most remarkable qualities is their illusionistic, sometimes almost photorealistic spatiality, since the three-dimensional quality of the fold is preserved in the colour as a sign on the stretched canvas. Indeed, they can be referred to – like photographic and film images – as indexical in accordance with philosopher Charles S. Peirce. Between the spatial arrangement of the canvas on the studio floor and the visual appearance of Spray Paintings as two-dimensional pictures, there is a causal physical connection – in the same way that the recorded object and photographic or film image are physically linked to each other in film or photography. Just as the fold is a transitional form between continuity and discontinuity – suitable, as Deleuze writes, for distributing «divergences, incompossibilities, discords and dissonances […] into as many worlds as possible» – Thomas Zitzwitz’s Spray Paintings change constantly between illusionism and self-referentiality: a moment of instability and ambiguity that remains fundamental to his painterly approach.