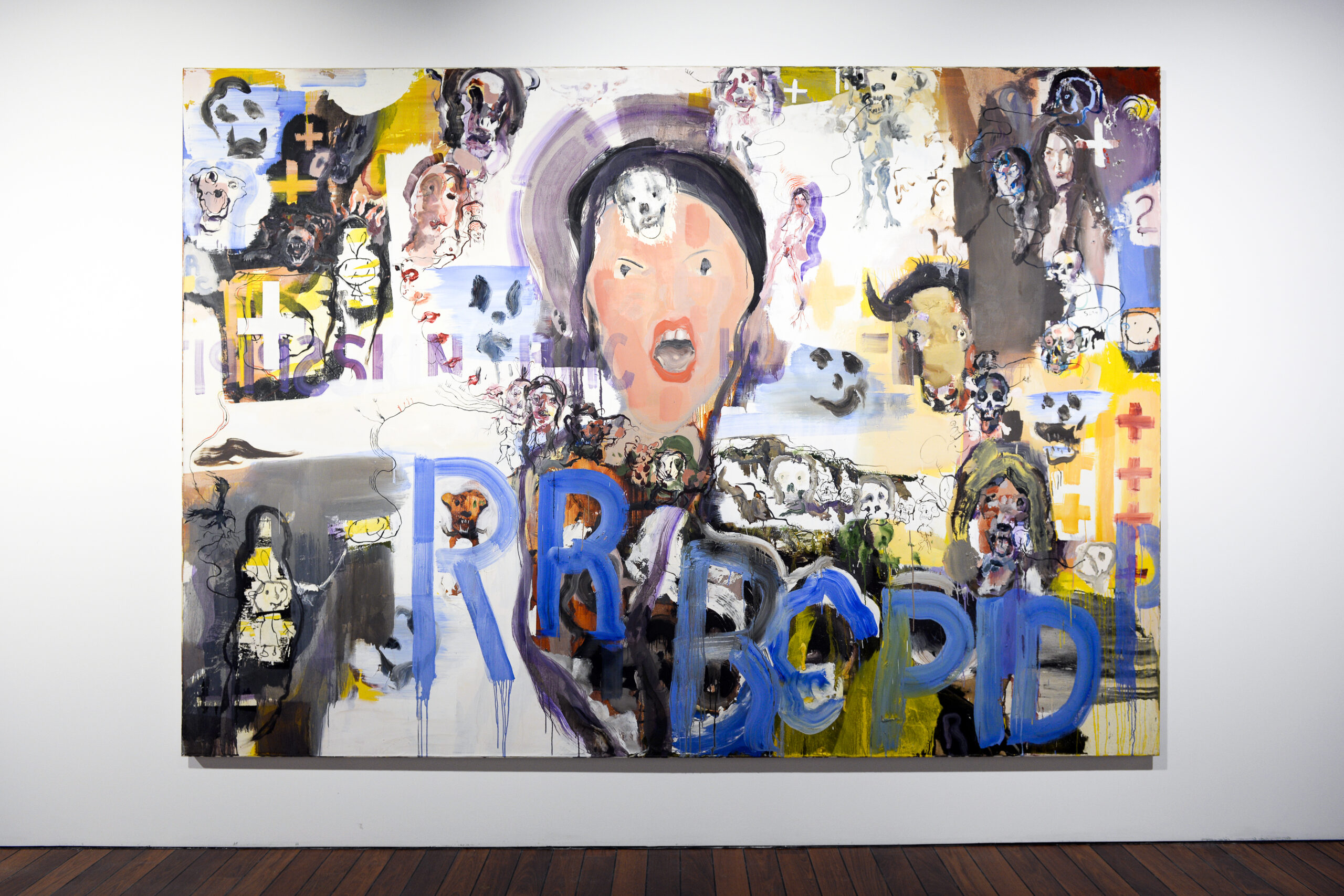 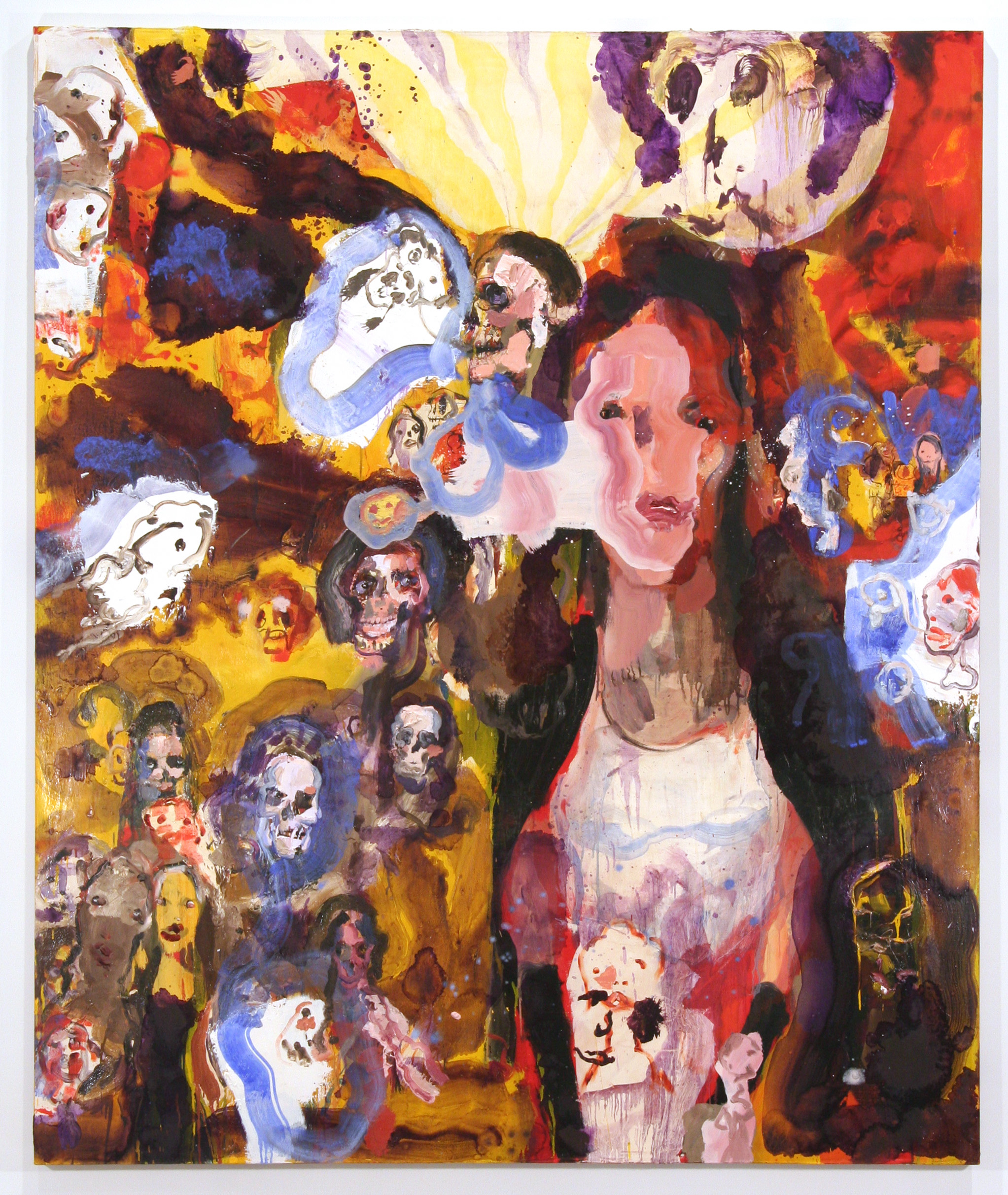 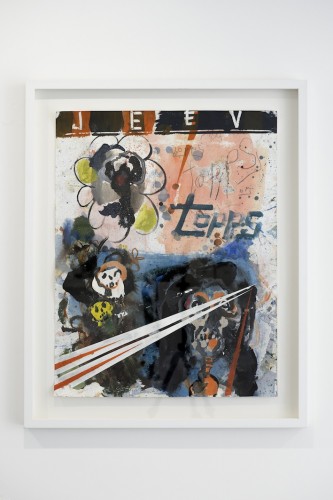 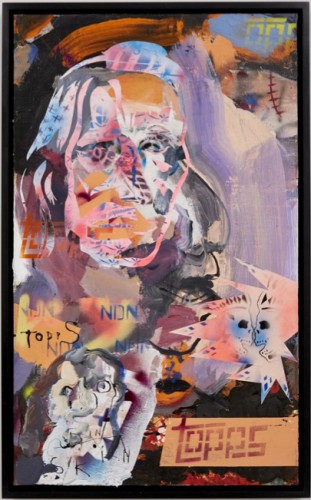 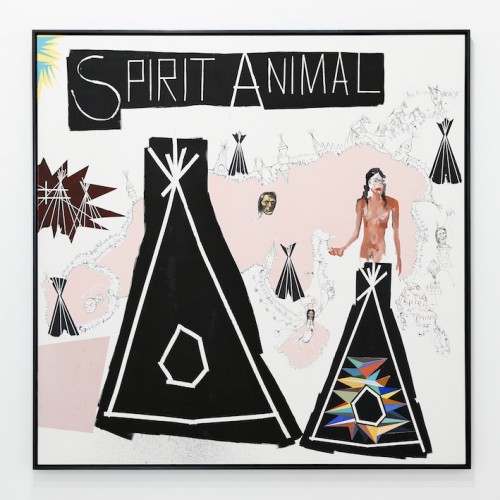 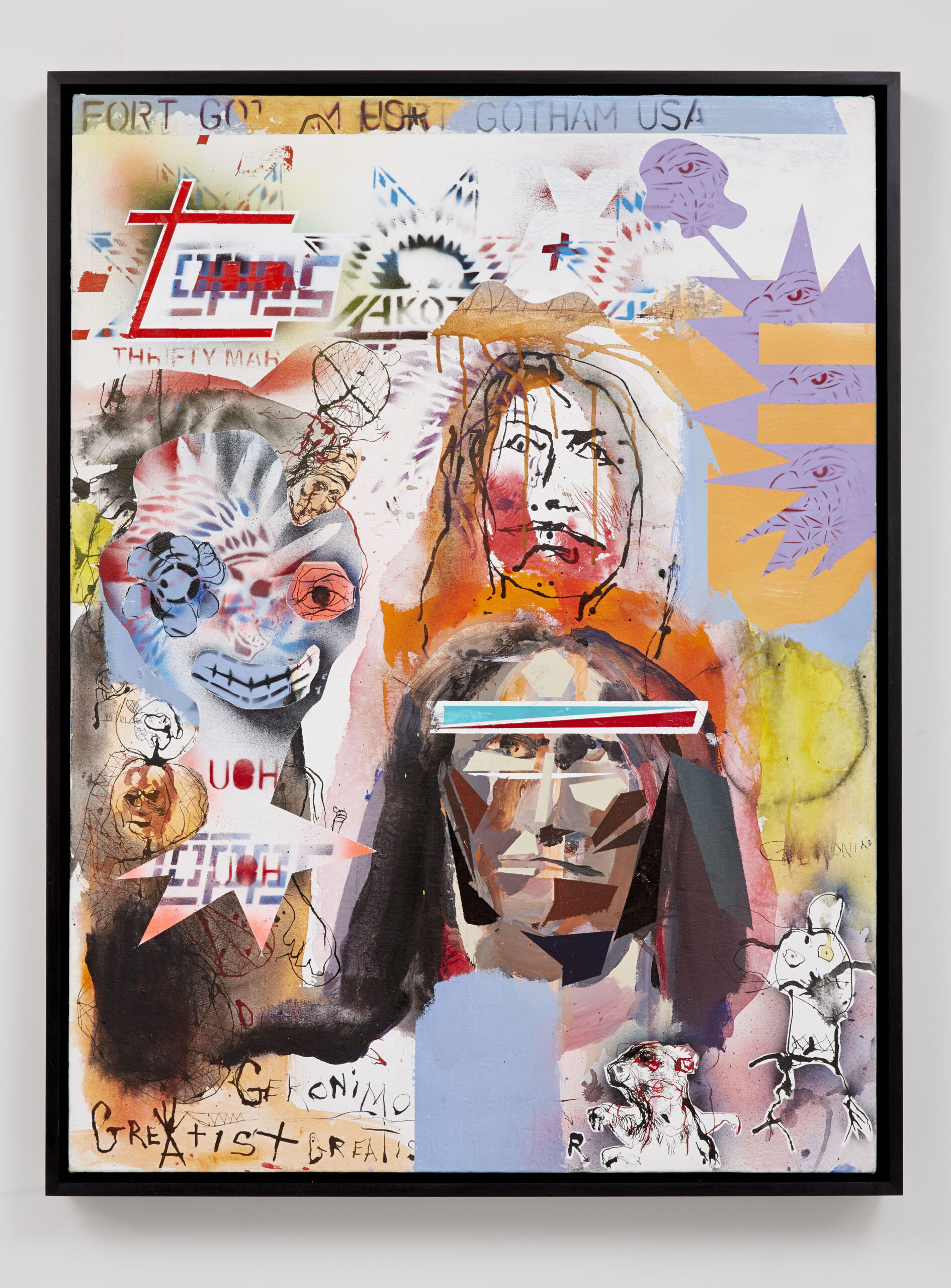 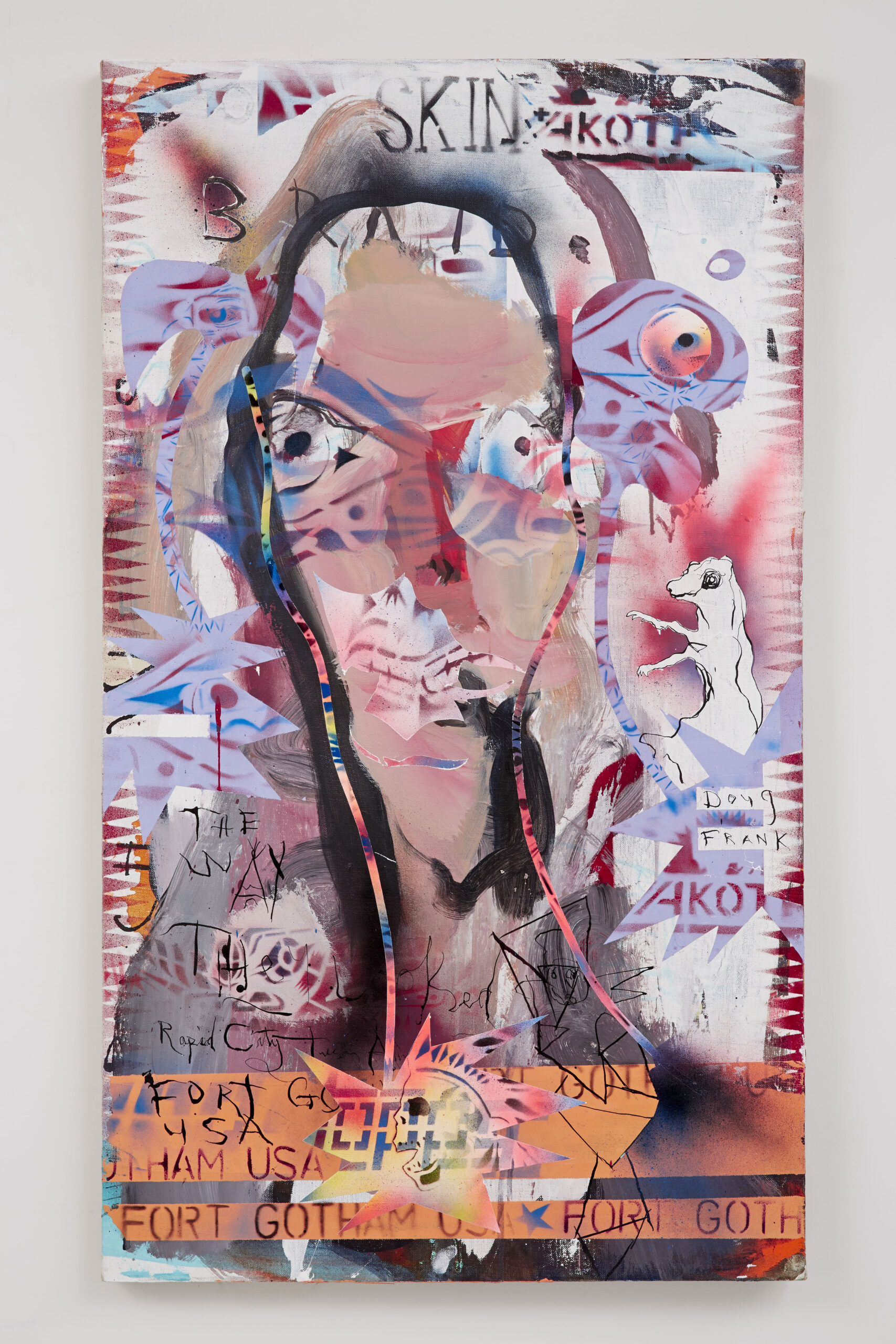 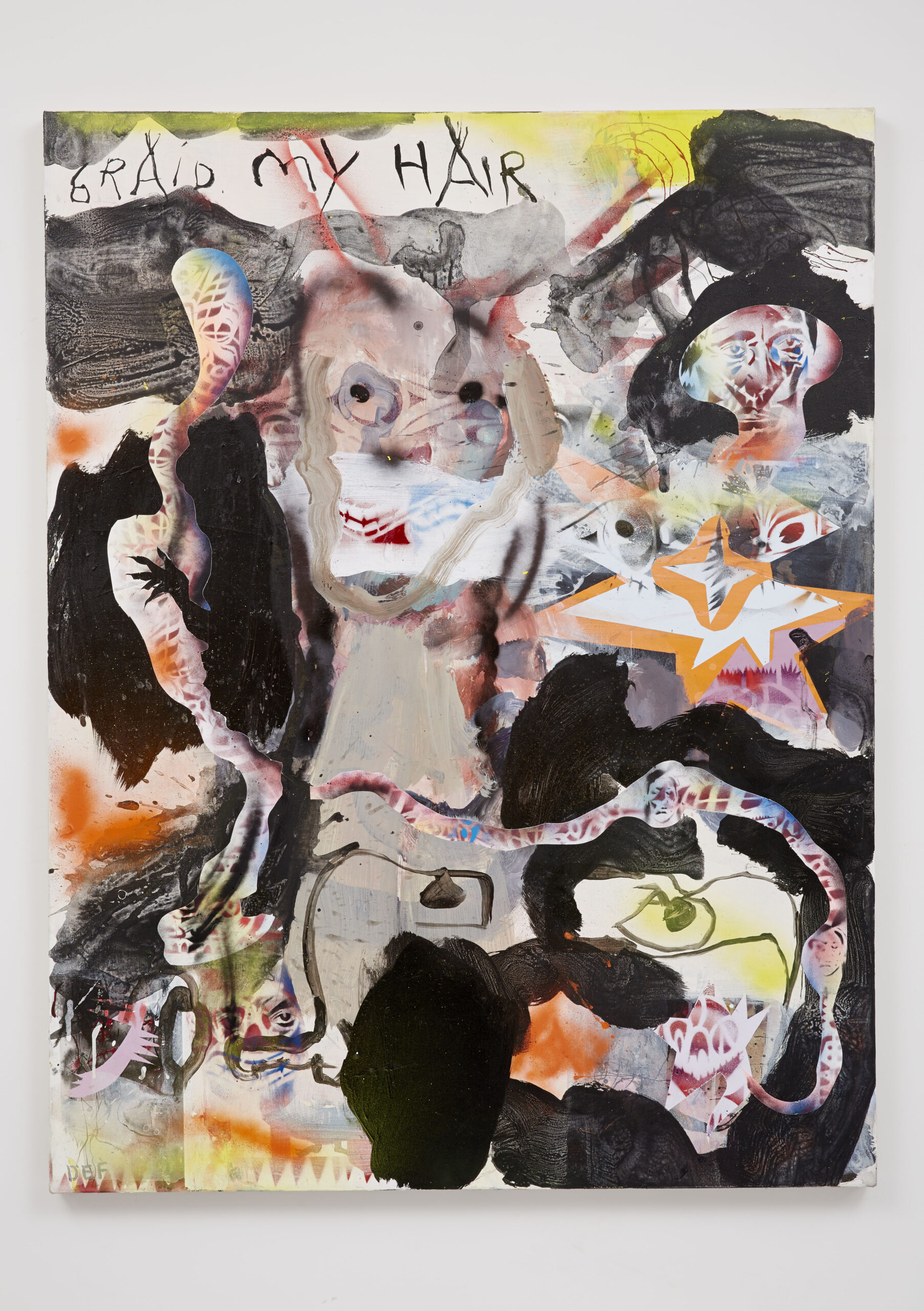 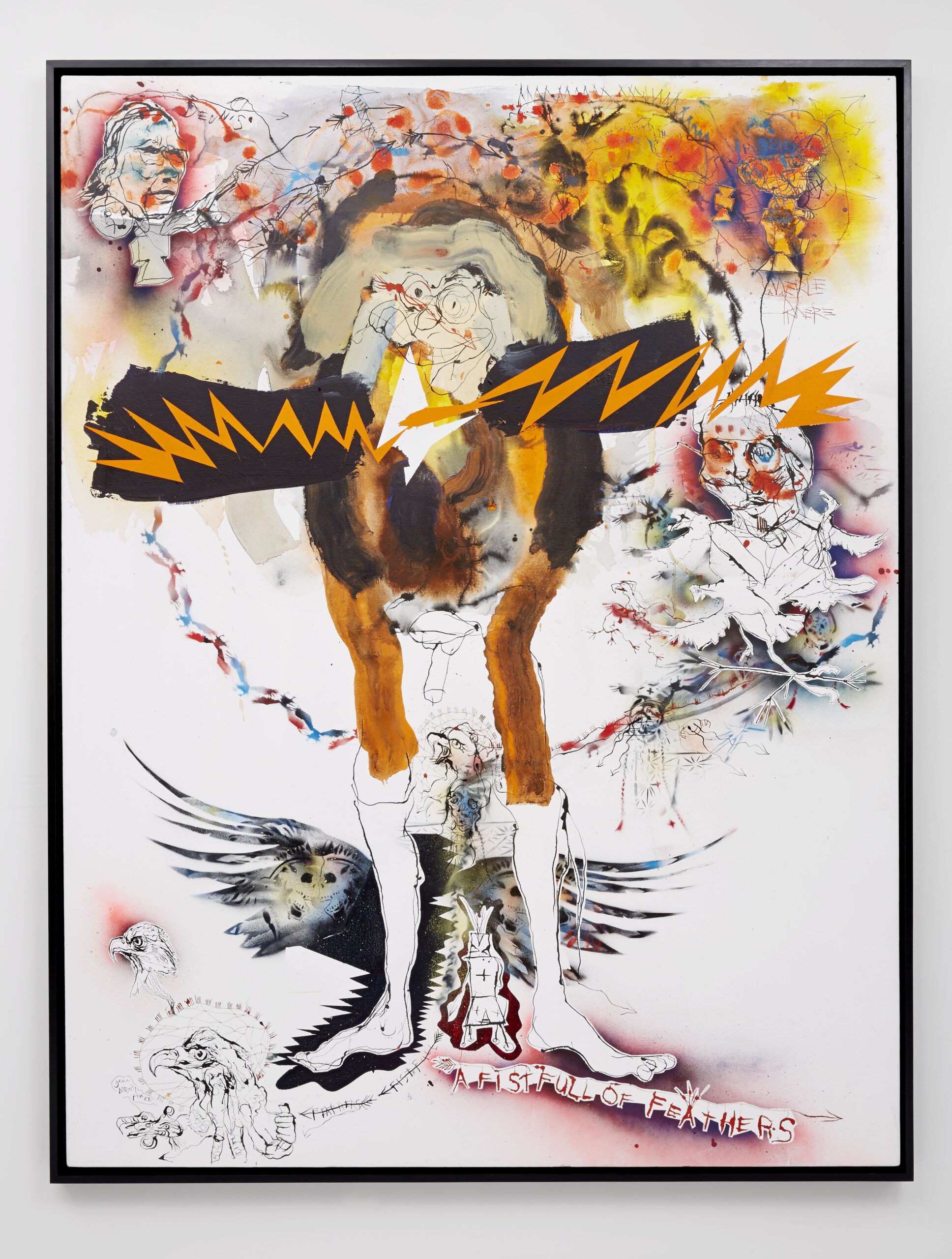 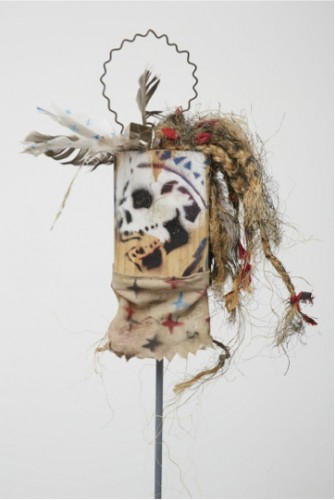 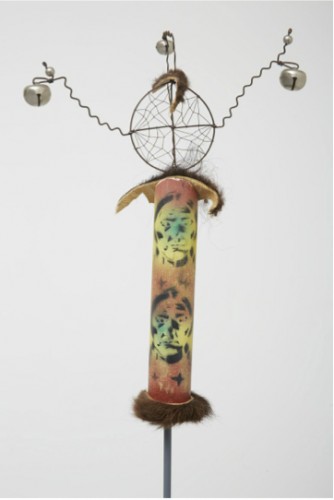 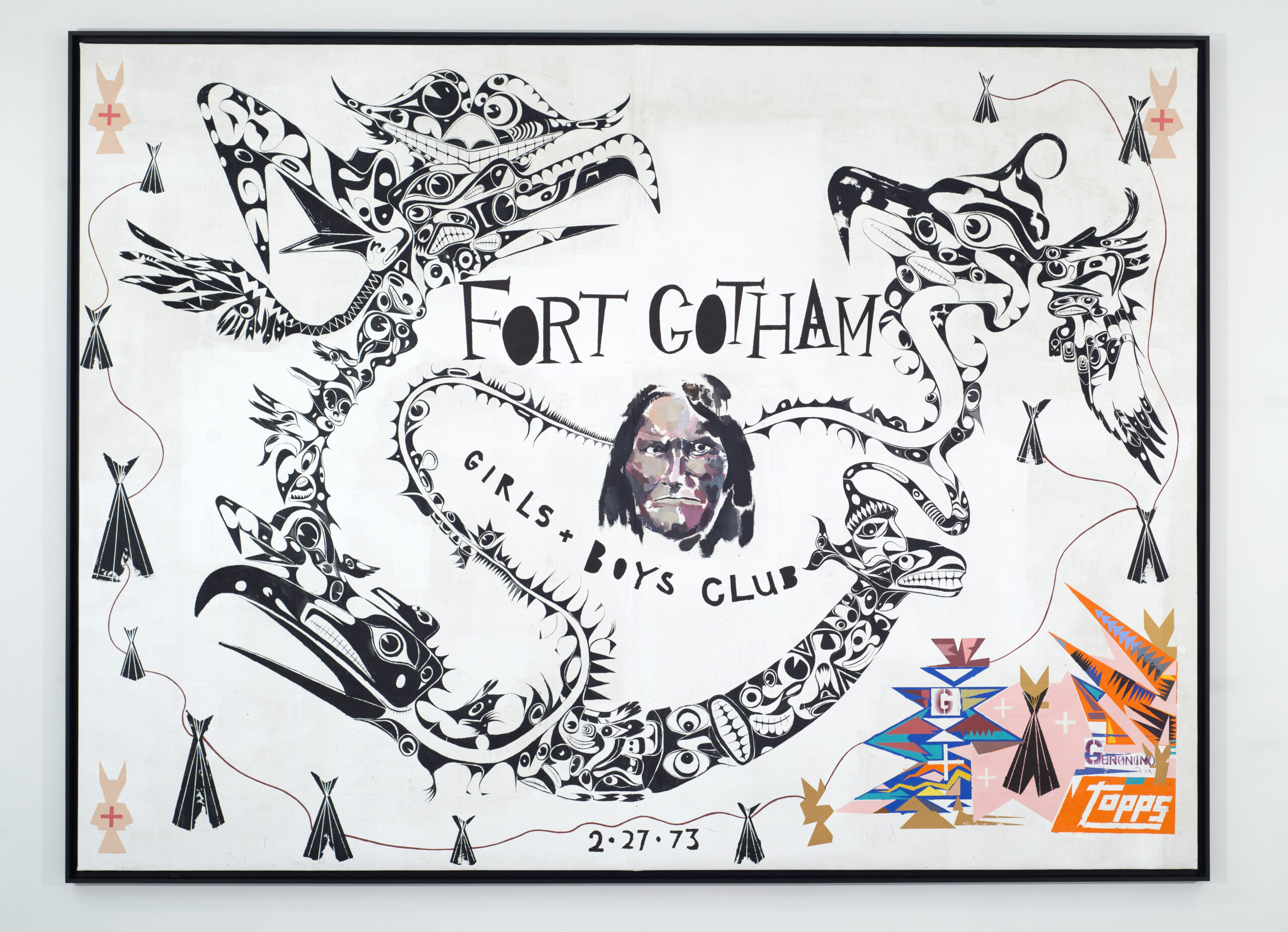 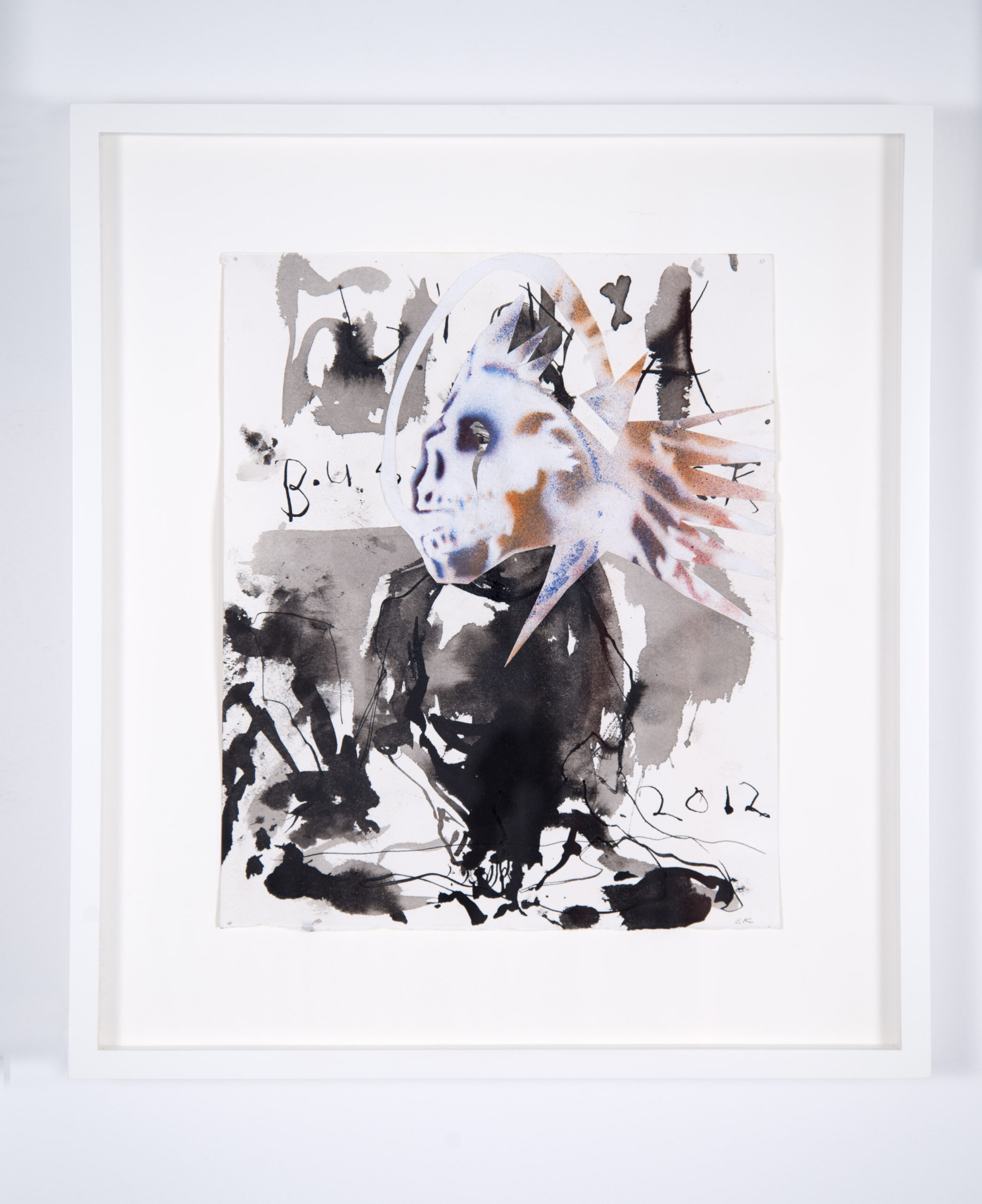 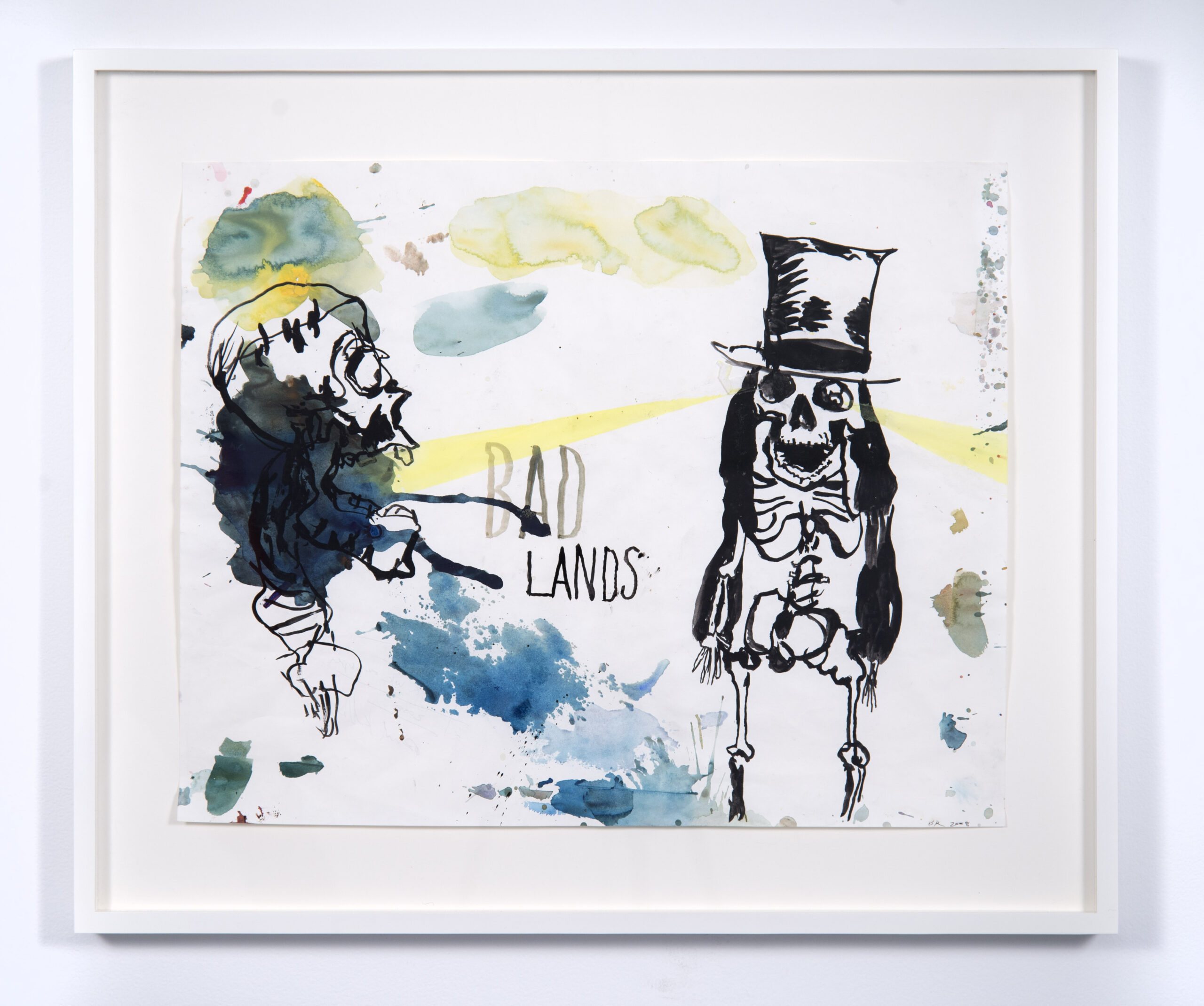 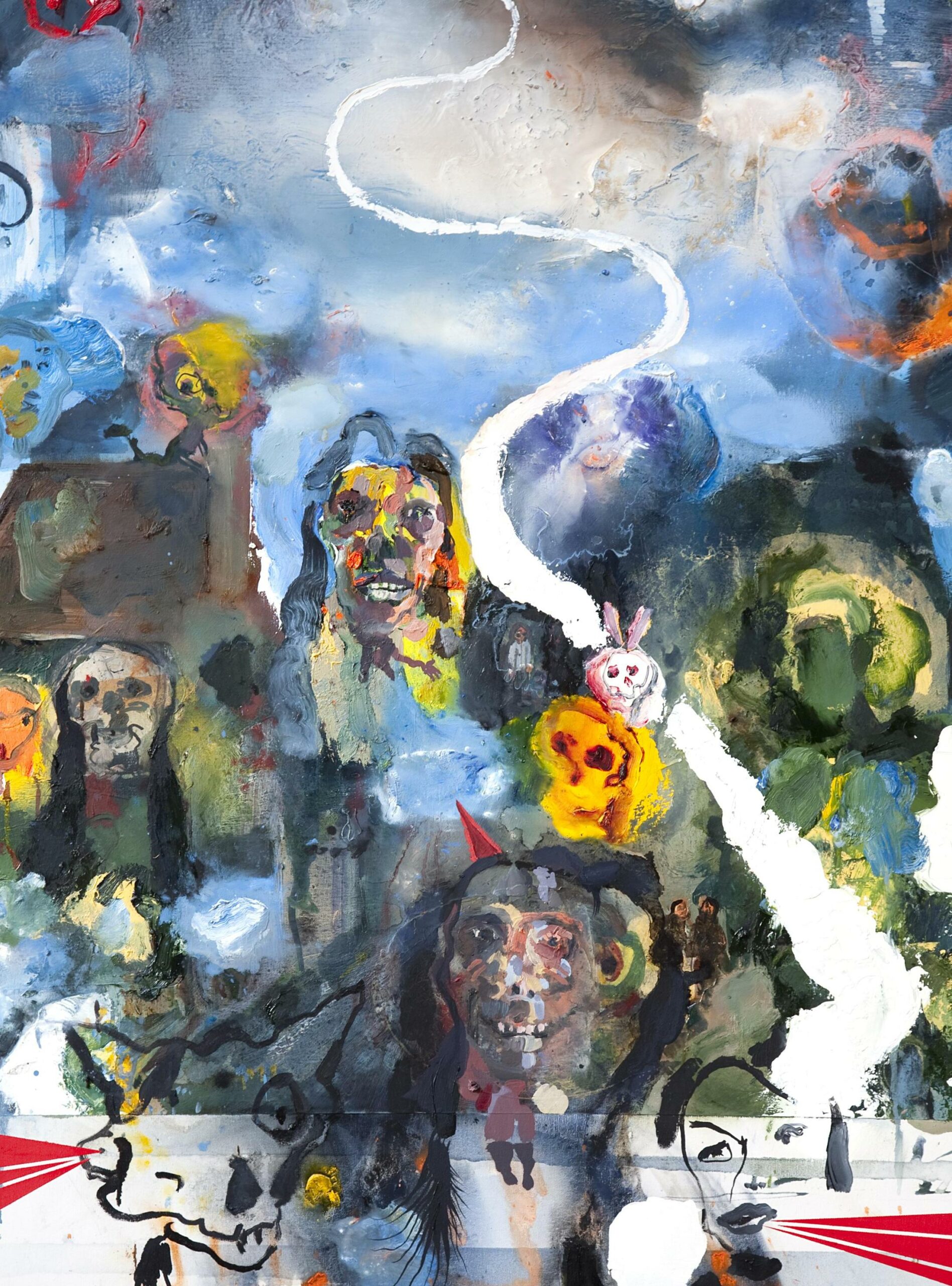 Over the course of his practice, Kahlhamer has worked within and between the mediums of painting, drawing, sculpture, installation, performance and music. This profusion of media builds layers of influence that are drawn from physical localities, daily surroundings, aesthetic experiences, collected ephemera and conjured histories that are both real and imagined. Through his paintings and sculpture new universes are built, simultaneously urban-rural and high-low with their own language of symbols drawn from such seemingly disparate sites as Topps Chewing Gum (his former employer), the Lakota Thrifty Mart in Eagle Butte, South Dakota, California skateboard culture, proliferative street art of Bushwick, Brooklyn and Kahlhamer’s personal taxidermy collection, to name only a few. His work has often been described as existing in and representing a “third place” measured by complexity and contradiction, its most salient attributes. Kahlhamer’s unruly methodology can serve as a mirror for a cross section of American cultures and their very consumption while also being a meditation on his own identity and his interest in the “re-wilding” of himself and the contemporary tribal male.

Brad Kahlhamer was born in 1956 in Tucson, Arizona to Native American parents and later adopted by a middle-class German-American family. He earned a BFA from the University of Wisconsin-Oshkosh in 1982. Kahlhamer is included in numerous public collections including the Museum of Modern Art, New York; the Whitney Museum of American Art, New York; the Seattle Art Museum, Washington; the Denver Art Museum, Colorado; the Weatherspoon Art Museum, North Carolina; the Milwaukee Art Museum, Wisconsin; the Nerman Museum of Contemporary Art, Kansas and the Hood Museum of Art, New Hampshire, among others. His work has been exhibited extensively in the United States as well as internationally. Recent solo exhibitions include Brad Kahlhamer: A Nation of One, at the Plains Art Museum, Fargo, North Dakota (2019-2020) ; Super Catcher, Vast Array, at Open Spaces, Kansas City, Missouri (2018) ; Other Walks, Other Lines, at the San Jose Museum of Art, California (2018-2019). He was part of the Musée du Quai Branly’s exhibition The Art and Life of the Plains Indians opening in 2014 traveling to the Nelson Atkins Museum of Art, Missouri and the Metropolitan Museum of Art, New York. Kahlhamer was commissioned by the Smithsonian to write a soundtrack for a silent film called Red Skins (2002). 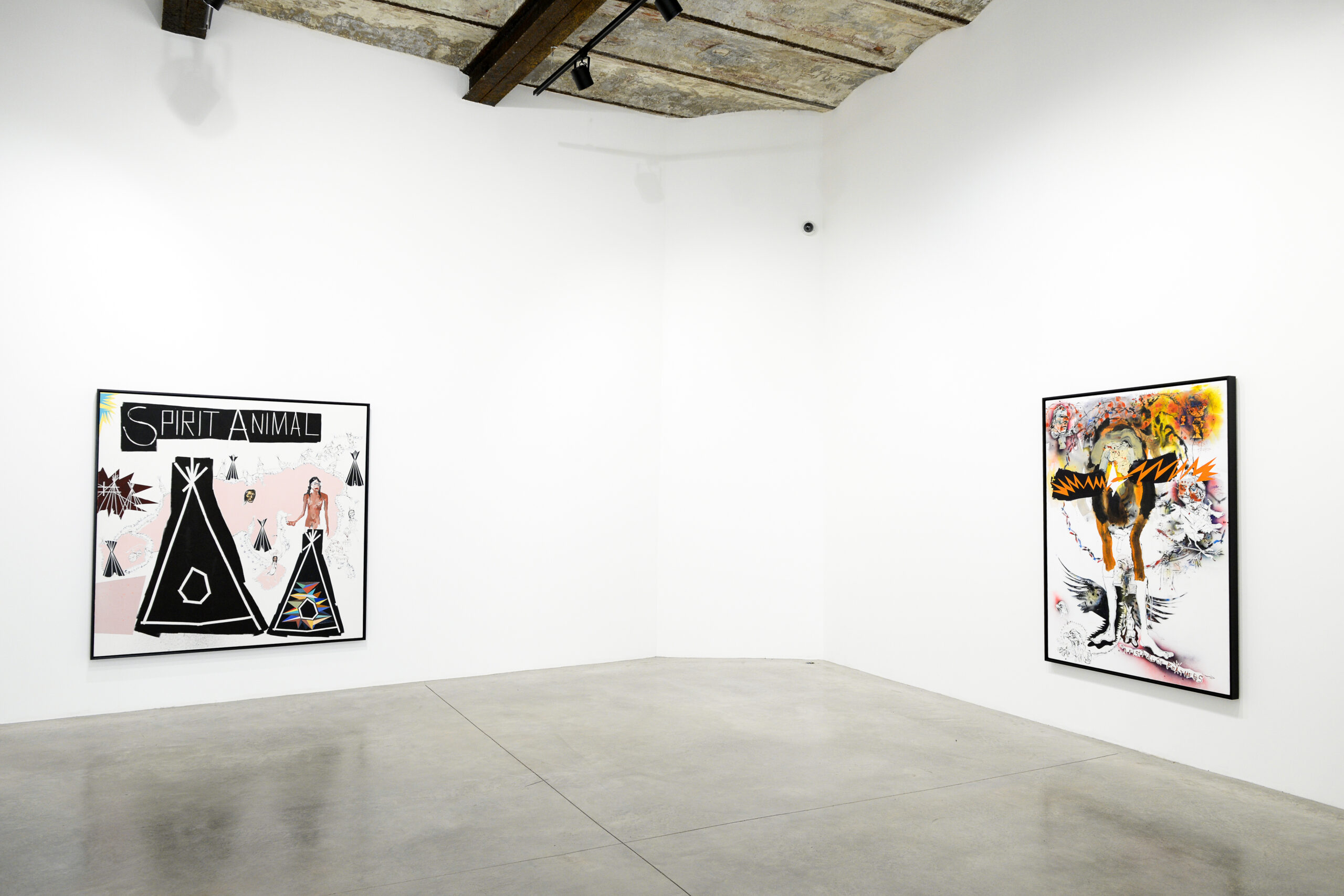 Zidoun-Bossuyt Gallery is pleased to announce Fort Gotham Girls + Boys Club, Brad Kahlhamer’s new exhibition which will include a selection of paintings, sculptures and drawings. 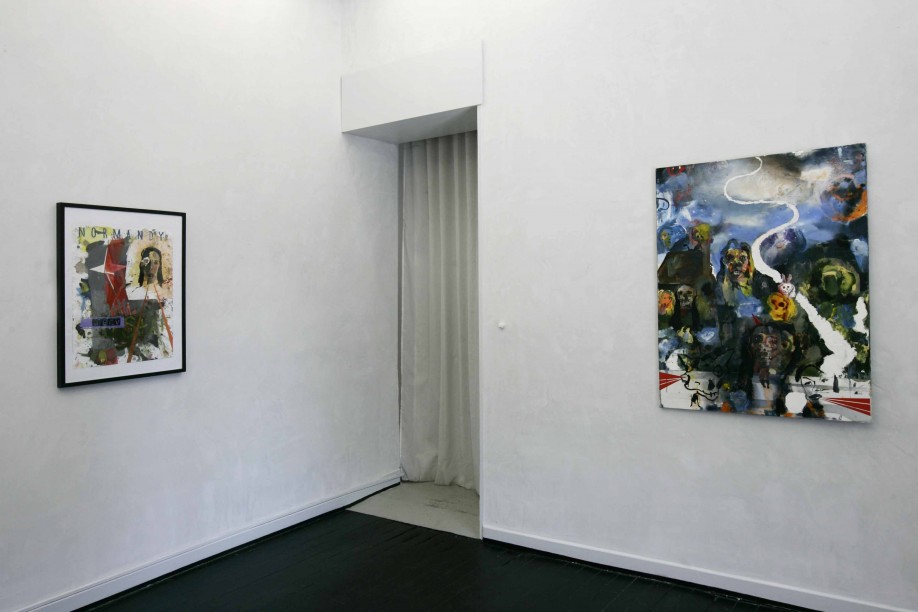 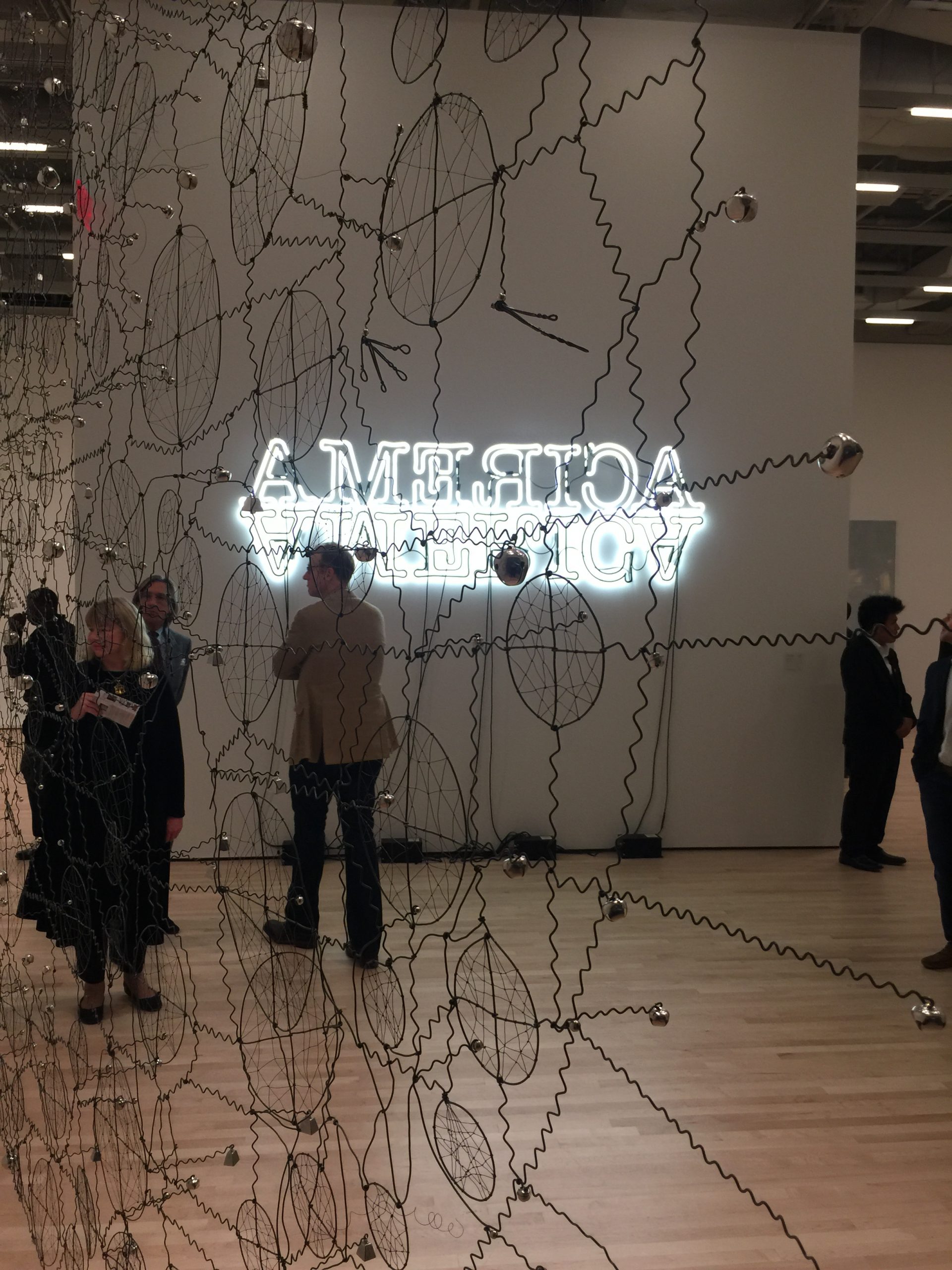